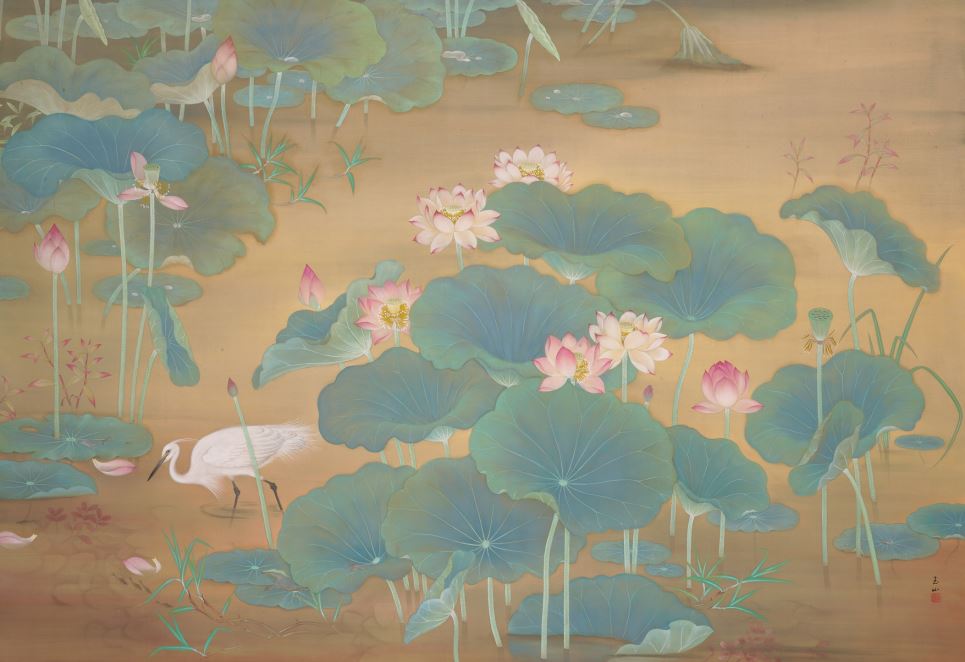 Deeply fascinated by the serenity and delicacy of nature, the 23-year-old Lin Yu-shan went back and forth several times to a large pond on Mount Niuchou (牛稠山) in the northern suburbs of Chiayi City. From dusk to early morning, despite being eaten alive by mosquitoes, the artist tried to capture the most exquisite moments of lotuses blossoming.

One stroke at a time, guided by a keen observation of details, Lin finished his best-known piece "Lotus Pond (蓮池)." Through the employment of gold pigments, the painting impeccably captured how sunlight lent its bright hues to the pond water, rendering a sense of warmth and spirituality. In addition to being rooted in Western realism, the painting embodies traditional Chinese aesthetics and reflects Taiwan's natural tranquility.

In 1930, "Lotus Pond" topped the fourth edition of the government-sponsored art fair "Taiwan Fine Arts Exhibition (臺灣美術展覽會)" and went on to influence the orientation of subsequent painting styles in Taiwan, giving it an irreplaceable importance and position in Taiwan's fine arts history.

The masterpiece, now one of the National Taiwan Museum of Fine Arts' most-coveted artworks, was put up for sale by its previous owner in 2000. It was reported that a bidder from Japan intended to purchase the painting for NT$20 million.

Short on NT$3 million to secure the significant piece, the Taichung-based museum launched a nationwide fundraising campaign and managed to acquire the painting by pooling together contributions from the private sector. "Lotus Pond" was therefore the first cultural asset that the authorities in Taiwan teamed up with civilians to keep at home. In 2015, the piece became the first-ever modern painting to receive the nation's highest designation for antiquities.

As artists nowadays explore the incorporation of technology with art, the piece from 1930 has been transformed into an even more vivid scenery in two virtual reality-powered art exhibitions — "Lotus Pond in Zuoying” of 2017 and "Highlights of Donated Artworks by Lin Yu-Shan" of 2019.