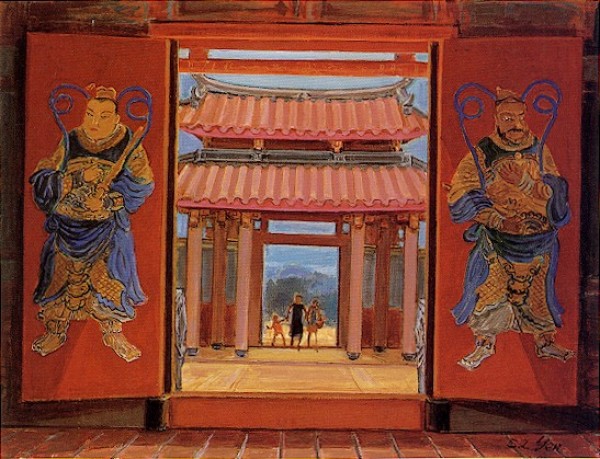 The father of Taiwan's crafts

Yen Shui-long (顏水龍), a modern painter who received overseas art education during the Japanese colonial era, was not only known for his paintings but also for his key role in the development of Taiwan's crafts culture. He introduced the aesthetic and social vision of crafts to Taiwan, and helped improve people's everyday life through the arts.

As the first Taiwanese artist who studied in both Japan and France, Yen was privy to their advanced designs and decorative yet functional objects. Thus, when Yen returned to Taiwan in 1944, he started to promote the creation of crafts for daily use to improve the aesthetics of daily life.

In the same year when Yen resettled in Taiwan, he served as a tour guide for Yanagi Soetsu (柳宗悅), the founder of Japan's folk art movement who was visiting Taiwan for crafts inspection. The meeting allowed them to exchange ideas on Taiwan's crafts, and prompted Yen's visit of Yanagi in Tokyo to learn more about Japan's experiences in crafts development.

Yen's understanding of Taiwan's society made him believe that it was necessary to connect arts with life - specifically to make everyday objects, living spaces, and landscapes become more aesthetically pleasing to cultivate people's appreciation of the fine arts. To achieve this goal, Yen started with developing crafts in Taiwan.

During the 1950s, Yen was invited by the Nantou County government to help develop the local crafts industry. Yen then served as the director of Nantou County Craft Research Class (南投縣工藝研究班), predecessor of the National Taiwan Craft Research and Development Institute, which was founded in 1954 to cultivate a new generation of high-end crafts.

The class offered one- to two-year training programs that encompassed bamboo art, wood sculpture, lacquer, rattan art, ceramics, and weaving, helping to foster numerous professionals at that time. In addition, Yen introduced design and decorative concepts into the making of crafts to make such products both practical and desirable.

Under Yen's guidance, students applied craftsmanship to the production of everyday objects such as handbags, slippers, and doormats, which became best-sellers in Taiwan. The successful sales prompted Yen to establish Tainan Rush Products Cooperative (台南州藺草產品產銷合作社), which helped revive the local crafts industry and improve economic gains.

Unlike many artists of his generation who focused on teaching fine arts, Yen dedicated his lifetime to improve the everyday life of the Taiwanese people. He also published the first book on Taiwan's crafts in 1952 - "Formosa Industrial Art (台灣工藝)” - which documented his inspections on regional crafts across Taiwan and his visionary plan for strengthening the crafts industry as a whole.

The National Taiwan Crafts Research and Development Institute (NTCRI) in Nantou County's Caotun Township is the nation's only national-level institute for craft arts. Its primary mission is to display, collect, study, and promote the country's craft arts and to make crafts educational and entertaining by showcasing local and international artwork ... (read more)

As one of Taiwan's first-generation modern painters, Yen Shui-long was a versatile artist who was influenced by Japanese and French aesthetics. In addition to creating a wide range of artworks throughout his career, Yen as served a pioneering advocate for making the arts a part of everyday life, launching craft workshops and promoting cultural education across the nation ... (read more)