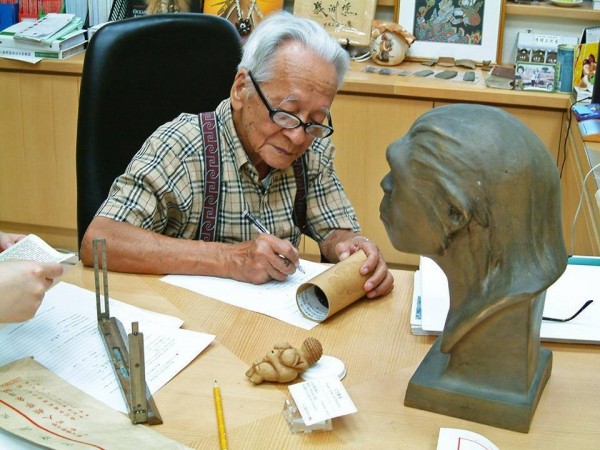 Sung Wen-hsun was a leading archeologist who spearheaded several excavations of major archeological sites in Taiwan. He was also a key advocate for the establishment of the National Museum of Prehistory in Taitung County. In 2012, Sung received the 2nd National Cultural Heritage Preservation Award for lifetime achievement in preserving Taiwan's prehistoric culture.

Born in Taipei in 1924, Sung attended Meiji University in Tokyo for a 2-year preparatory course in 1943. Returning to Taiwan in 1945, Sung's interest in history led him to study archeology under Kokubu Naoichi (國分直一), a Japanese scholar who specialized in the study of Taiwan's archeology, folklore, and ethnology. In 1951, Sung received a bachelor's degree in history from the National Taiwan University, and served as teaching assistant at the NTU Department of Archeology until 1994.

In Taiwan, archeology is generally considered an unpopular university major. To boost the scope of academic research on Taiwan's archeology, Sung carried out numerous field studies to research and record his findings. The hard-working scholar was also a highly respected teacher at university. Through sharing his own experiences in excavation work, Sung not just lectured but also brought archeological samples for students to examine in class.

Changbin Culture (長濱文化), Qilin Culture (麒麟文化), and the Beinan Archeological Site rank among some of Sung's most significant discoveries. Changbin is the oldest culture to be found in Taiwan, dating back to 50,000 years ago. Named by Sung and fellow archeologist Lien, the culture of Qilin is categorized as independent from those belonging to the Megalithic Cultures on Taiwan.

After retiring from teaching in 1994, Sung continued to serve as an honorary professor and researcher at the Institute of History and Philology at Academia Sinica. For helping the contemporary development of Taiwan's archaeology and instigating the nation's first museum for historic heritage preservation, Sung paved the way for later successors in pursuit of historical truth.

He was awarded the Order of the Rising Sun from Japan in April 2016 just prior to his death from cerebral hemorrhage during sleep. He passed away at the age of 92.