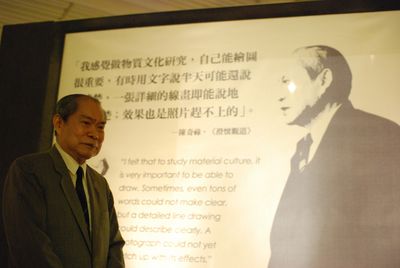 Dr. Chen Chi-lu, the first-generation cultural helmsman of post-war Taiwan, was one of the most qualified and prestigious anthropologists of his era. He had also served as the first commissioner of the Council for Cultural Affairs and successfully converted the academic concept of culture into practical cultural construction.

Born in 1923 in Tainan City during the Japanese rule of Taiwan, Dr. Chen rose to prominence in 1976 as an academician of Academia Sinica, the highest research institute in the country. He was tasked with the establishment of the Council for Cultural Affairs, the predecessor of the Ministry of Culture, shortly after submitting "The Strengthening of Cultural and Recreational Activities Program” to the Executive Yuan in 1981.

During his eight-year tenure as the first minister of the Council for Cultural Affairs, he had devoted himself to safeguarding Taiwan's traditional heritage, preserving and perpetuating aboriginal cultures, promoting art and cultural subsidies, strengthening the characteristics of local communities, and establishing the system of cultural laws and regulations.

Specifically, Dr. Chen promoted the enactment of several major cultural laws, including the Enforcement Rules of the Culture and Arts Reward Act and the Cultural Heritage Preservation Act. The foundation he laid paved the way for the cultural construction and development in Taiwan during the past three decades.

Dr. Chen was also a famous calligrapher and was exceptionally achieved in the writing style of Wei tablets, which is evidenced by the characters "Presidential Palace” he wrote on the plaque above the gates of the Presidential Palace, a designated national monument.

In recognition of his outstanding contributions to the establishment of the Council for Cultural Affairs, the formulation of cultural laws and regulations, the strengthening of local cultures, the preservation of cultural heritage, and the nation's overall art and cultural development, Dr. Chen received the National Cultural Award in 1990 and a posthumous presidential citation in 2014.