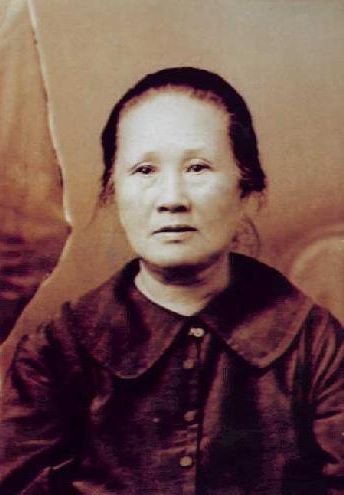 Minnie Mackay was a pioneer in the women's movement in Taiwan. After her marriage, she worked with her husband as a missionary, helping her husband break down the patriarchal attitudes among Taiwanese society toward female preachers and using her intimate knowledge of the language and culture to help communicate the Christian religion more clearly to the locals. Not only did she help give women across Taiwan the chance to participate in public gatherings, she also increased their access to education.

Minnie was born Zhang Congzi ("Spring Onion") to a poor family living at the foot of Mt. Guanyin, across the river from Tamsui. Adopted out to the family of her arranged husband at an early age (a tradition known in Mandarin as tongyangxi), she never received a formal education. Then, when she was 12 years old, her husband-to-be fell ill and passed away.

In 1873, Rev. Mackay established the first church in Northern Taiwan at Wugukeng, and Minnie's adopted grandmother, Chen Ta-sao (陳塔嫂), became Taiwan’s first female convert. When the church began offering classes to children 12 and older, teaching them to read Romanized Taiwanese, Chen took Minnie to attend, where she learned to read the Bible and soon became top of her class, even earning a study grant.

In 1878, when she was baptized, Rev. Mackay gave her the baptismal name Tsung-ming ("Clever"). With his student Chen Yun-teng (陳雲騰) as matchmaker, Rev. Mackay got the permission of Grandma Chen and her family to marry Minnie. The two were wedded in front of witnesses at the British Consulate in Tamsui on May 27, 1878.

For their honeymoon, the couple visited churches in Northern Taiwan, and afterward, they headed by boat to Dalongdong, then over land to Houlong in Miaoli, where they visited believers at various missions. Along the way, Minnie helped her new husband with his evangelism with her familiarity with the customs and people of Taiwan. The following year, she and the wife of Rev. Kenneth F. Junor worked together to spread the gospel, forming the first women group to work with the church in northern Taiwan.

In 1879 she accompanied her husband as they left Taiwan for Canada, passing through Xiamen, Hong Kong, Singapore, and Malaysia along the way, preaching and attending church as they went. After the couple arrived in Canada, not only did George travel around to preach, Minnie herself also spoke to women at churches in Canada and the US.

Although she had not received a formal education as a child, after her marriage Minnie set to study with a passion, not only learning Romanized Taiwanese, but also learning to speak English. When Oxford College (now Aletheia University) opened in 1882, she was the only female teacher among the six-person faculty, and thus she could be considered the first Taiwan-born female teacher and preacher.

Rev. Mackay passed away in 1901, and in 1925 Minnie donated the more than 1.6 hectares that her husband had left the family to Tamsui High School as a sports field. It was with this new field that the school would later go on to develop a respected rugby team. In September that same year, Minnie passed away.