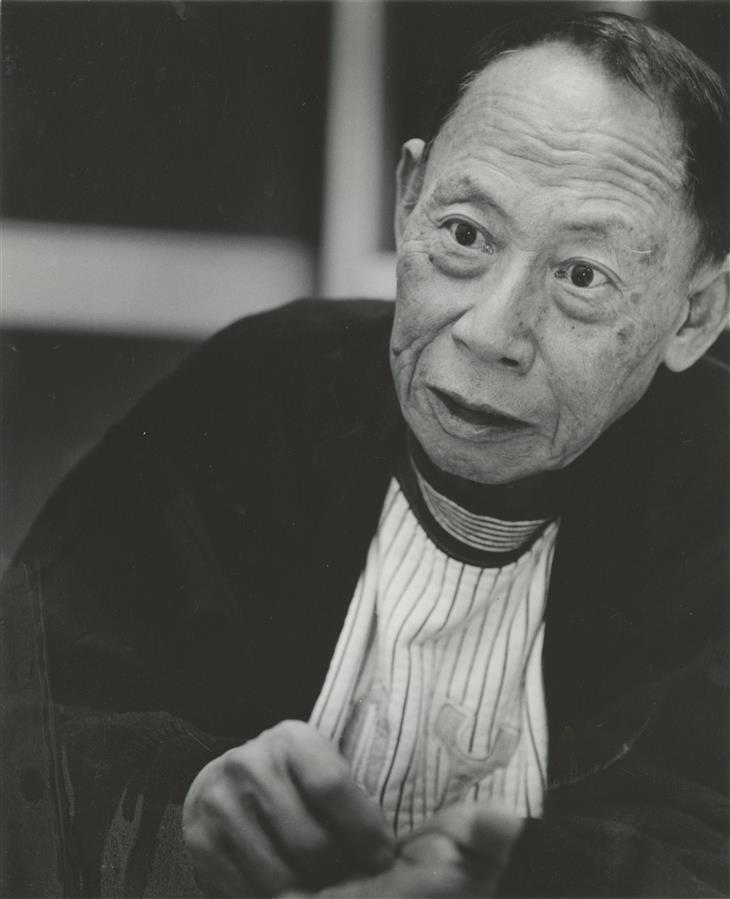 Name: 曾仲影
Born: 1922
Place of Birth: Shanghai
Did You Know...?
Tseng Chung-ying arrived in Taiwan in 1946, avoiding police search in a thrilling escape. Later, he saw an advertisement from the Central Broadcasting System looking for radio announcers, and after successfully applying, Tseng became the first Taiwanese-language announcer. In the wake of the 228 Incident, Taiwan governor Chen Yi (陳儀) gave a speech on the radio to the people of Taiwan; Tseng Chung-ying served as his Mandarin-to-Taiwanese interpreter for that broadcast. The following day, however, Tseng was arrested on accusations of spying and held in the military prison of the Taiwan Garrison Command for 18 months. He was then inexplicably convicted of interference with public order and imprisoned for another six months.

Tseng Chung-ying was born Tseng Chi-lin in Shanghai in 1922. For the first seven years of his life, his family enjoyed great wealth. He would often go with his grandparents by private sedan to the Tianchan Theater to watch Mei Lan-fang (梅蘭芳) perform, and the music of Beijing opera, in particular, left a great impression on him. At the time, Shaoxing and Huangmei operas were popular in Shanghai, and at home, the servant girls and old women would listen to Cantonese opera. As a result, Tseng was exposed to a wide variety of traditional musical forms.

Between 1924 and 1926, the Chinese film industry was at its peak, and so the cinema was also an important source of entertainment for the young Tseng. With the situation between the Kuomintang and the communists creating turmoil, in 1934, Tseng began being privately educated, led by his teacher through studies focusing on both the West and the East, along with diligently studying the classics. In 1937, he skipped a grade and was admitted to the Anglo-Chinese School in Gulangyu, Xiamen. A lover of literature, he treasured the chance to read the famous classics available at the school. While his high school years were turbulent, he was able to earn money to support himself through his writing. Later, he made his way into both the theatrical and pop music scenes, discovering that his talent for writing could also be turned to musical purposes.

In 1940, he joined the Model Youth Corps and traveled to Shanghai for military training, including a visit to a film studio. In 1945, in response to a government call for youth to enlist in the military, Tseng joined the 208th Division. Soon after, the Japanese surrendered, and Tseng found himself wanted for a physical altercation with an American military officer, so he took a boat to Keelung and began a new life in Taiwan.

In the wake of the 228 Incident in 1947, Tseng was imprisoned. After his release in 1949, he got an opportunity to join a musical troupe in Donggang, southern Taiwan. Relying on his extraordinary talents and tireless drive, he taught himself to play the trumpet. He also learned to transcribe Western music notation during the troupe’s performance tours around the island.

In 1950, unable to bear continuing police harassment, he changed his name to Tseng Chung-ying (曾仲影). Claiming he was born in 1922 in Nantou County and was only an elementary school graduate, He essentially adopted an entirely new identity. That same year, with an introduction from a musician from the troupe, he was able to sign up for correspondence curriculum from the Berklee School of Music in Boston, Massachusetts. He studied jazz composition and performance. This experience brought new ideas, which were applied in his later works in military songs, movie scores, and popular music.

Since 1950, he has composed soundtracks for hundreds of films, including several Taiwanese-language classics. Of these, the one that caught on most with the public was "Blue Dream (藍色的夢)," with lyrics by Shen Chih and performed by Ran Xiaoling. Another of his more iconic works was "Shooting Star (一顆流星)," the theme song for the Taiwan Television series "King Drummer (青春鼓王)," starring Jiang Lang (江浪). Performed by singer Lin Wen-lung (林文隆), the song swept the nation. It would later be covered by such luminaries as Teresa Teng (鄧麗君), Bobby Chen (陳昇), Wu Bai (伍佰), and Fei Yu-ching (費玉清), proof of its lasting appeal.

Beginning in the 1960s, Taiwanese-language custume movies began to rise in popularity along with a boom in Huangmei opera. In 1966, Tseng composed the soundtrack for the film "The Snake Beauty (蛇美)." Koa-á-hì (Taiwanese opera) director Chen Tsung-ming felt that Tseng's work for the film had a rich koa-á-hì flavor to them and invited him to record backing music for a show that would be performed in the National Taichung Theater in 1970. The recordings he made for the troupe, the Liantong Taiwanese Opera Troupe (聯通歌仔戲團), came about just at the tail end of koa-á-hì popularity on the radio but led into a period when the form was about to find a new home on television.

Yang Li-hua (楊麗花) then invited Tseng to compose for the Taiwan Television Taiwanese Opera Troupe (臺視歌仔戲劇團). Able to quickly get to grips with what Yang was looking for and working with lyricist Di Shan (狄珊), the work flowed quickly and found repeat playings on television. He was also asked to compose new pieces for shows on other TV stations. In the 1980s, he tried his hand at directing films, with "A Swallow in the Storm (風雨中的燕子)" recognized by the Government Information Office and the Overseas Chinese Affairs Council as an Outstanding Taiwanese Film.

In 1995, he once again worked with Yang, working on music design for her koa-á-hì performance of "The Twin Spears of Lu Wenlong (雙槍陸文龍)" at the National Theater. Over the decades, Tseng has composed hundreds of koa-á-hì pieces, many of which continue to be performed by troupes around Taiwan. He wrote a new page in the history of the art form with accomplishments few could possibly match.

An actor, writer, director, and composer, he continues to win awards even as he approaches his 100th year, including the first New Taipei Cultural Contribution Award in 2017 and the Special Award for Publishing at the 31st Golden Melody Awards for Traditional Arts and Music in 2020.