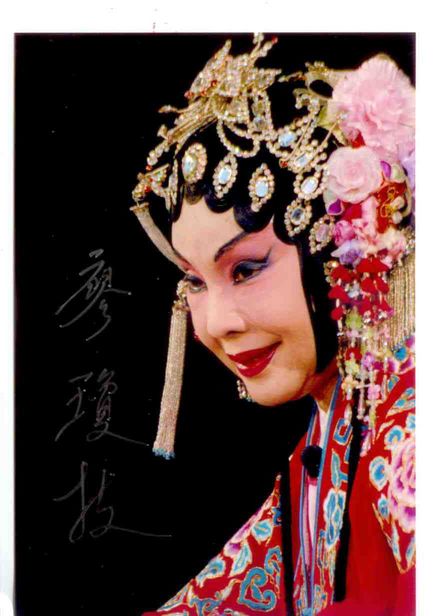 The life of Taiwan's top kudan, Liao Chiung-chih, has been, as the saying goes, 'like a play,' and a tragic one at that. Though she lost her parents and family at an early age, there was no hiding her natural talent. Liao was able to use her indomitable will to overcome adversity after adversity, honing and tempering her consummate skill on the stage.

Liao grew up without a father, lost her mother at the age of two, and buried her grandmother at the age of 13. To keep herself alive, she joined a troupe of performers that sold patent medicines. But the adults kept the accounts, and the bulk of her hard-earned money ended up in other people's pockets. Again and again, she was forced to borrow from Peter to pay Paul.

After almost being sold to a brothel at the age of 14, she apprenticed herself to an opera troupe to acquire technical knowledge and experience. Her formal training and her legendary rise to the top of the opera world began with the well known Chinshan Music Group that performed in Taipei's Wanhua district.

Despite her petite size, Liao had a powerful voice. She was trained to do female lead roles after going through three years and four months of strict training and harsh scolding.

In her early years with the company, she arose at 6am every morning to cook breakfast and attend to other chores for the troupe. Once her teacher arose, she had to prepare water for washing and tea. Her teacher would then arrange a chair in front of the stage, and, rod in hand, watch the members of the company practice basic moves. Fortunately, Liao's early experience of hard times provided her with a very high tolerance for pain and hardship.

In those days Liao was like most performers, illiterate. Though most find performing extemporaneously to be the most challenging aspect of becoming an opera singer, Liao, who had begun studying opera at 14 and had come into her own at 18, took to it like a fish to water.

One's life experiences were also an important training ground for the vivid performance of the opera. Most performers used the same actions and turns of phrase to show delight, anger, sorrow, and joy onstage as they did offstage. Consequently, the more they had experienced in their workaday lives, the easier it was for them to reflect those emotions in their singing and chanting.

Sobbing from the heart

The years that Liao began performing Taiwanese opera lead roles coincided with the golden years of Taiwanese opera, which were the late 1940s and early 1950s.

The diva became best known for playing tragic female roles. With her superb acting, singing skills, and wealth of experience in the school of hard knocks, Liao is able to invest real emotions in a role that involves weeping; her racked sobbing often getting the women in the audience crying along with her.

With the arrival of the radio and television eras, the performance of opera in theaters went into decline and the heyday of Taiwanese opera came to an end. In recent years, the preservation of Taiwanese opera has been Liao's constant concern.

Most of today's companies are assembled on the fly, making it hard to bring performers together for rehearsals. Then there's the modern-day emphasis on the 'new,' which results in a very high percentage of the production budget being spent on the writer, the director, and the lighting and stage effects. There's very little left for the performers themselves.

In Liao's view, the new operas have good points, but the older traditional operas are valuable as well, especially the librettos that have been handed down across generations. Because the tunes of the traditional operas are familiar, audiences can often sing along, which creates a sense of intimacy between them and the performers.

She stresses that new and old are equally important, that neither can be cast aside if Taiwanese opera is to be preserved and developed further.