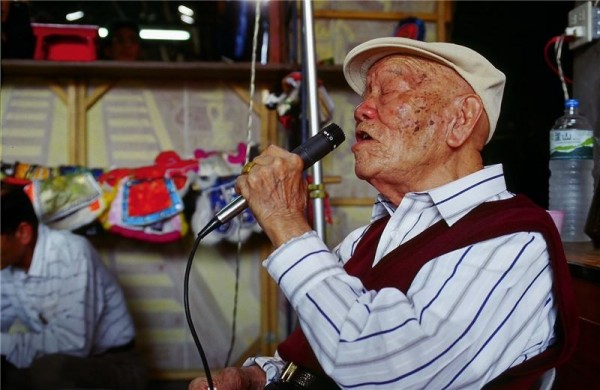 Dubbed a legend of Taiwanese hand puppetry, Huang Hai-dai founded Wu Zhou Yuan (Five Continent Garden) in 1929, which even today is the largest puppetry school in Taiwan. It is said to have more than 200 sub-troupes whose influences have shaped the face of the art over the past decades.

Wu Zhou school differs from its counterparts in the distinct voice-over of characters, refined and humorous lines, creative music scores, as well as the themes of loyalty, filial piety, and integrity in its plays.

Huang, who inherited his father's puppet company in the 1920s, made himself a master puppeteer with excellent voicing skills and singing in Beiguan music (a traditional music style in Taiwan), which is used to accompany the puppet plays.

The play scripts he wrote covered a variety of topics, including adapted historical stories and serial novels of the Ming and Qing dynasties, as well as original works. Shih Yen-wen, probably the best-known puppet character in Taiwan, was created by Huang.

In addition to these skills, Huang and his children also continued to innovate in the field of puppet art production, in order to make it more entertaining, by utilizing advanced props as well as kinetic, sound, and visual effects.

In the 1950s, Huang's second son, Huang Chun-hsiung, invented "Golden Light Puppetry,” which features puppets with a fancier design, as well as more dramatic lighting and sound effects. The new genre became so popular that television stations began broadcasting it, which ushered in a new era for the folk art.

The senior Huang, who lived to the age of 107, was still active in the profession even in his 90s. At the banquet celebrating his 90th birthday, he personally staged "Yun Zhou Da Ru Xia,” a play starring Shih Yen-wen. He was invited to perform in New York in 1993 and in France in 1995.