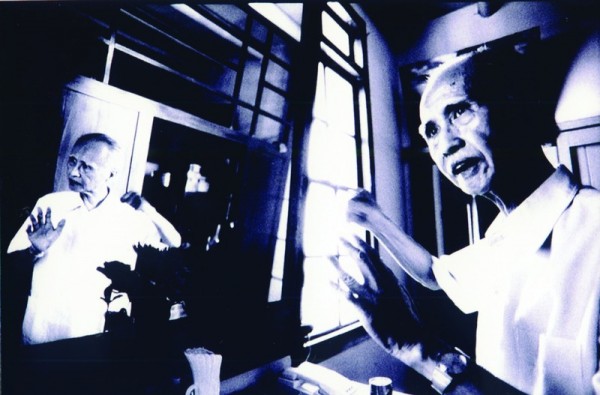 The renowned composer Kuo Chih-yuan was born in Miaoli County in 1921. His father Kuo Wan-tsuei (郭萬最) was a music lover who played violin at home, so his son grew up listening to a wide variety of instruments and developed a passion for music.

Kuo began to pursue his passion after a childhood of listening to the different types of traditional music performed at a temple nearby his house. The traditional music varieties included Taiwanese opera (歌仔戲), traditional Chinese opera (正音), Peikuan opera (亂彈), Gaojia opera (高甲戲), and Chariot and Drum parade (車鼓戲).

He was then introduced to Japanese folk songs and western music at his elementary school, which he attended while Taiwan was under Japanese colonial rule. The elementary school was also where Kuo met his first musical mentor and lifelong inspiration.

The renowned composer has previously stated that "I may not have dedicated my life to music if I did not meet my teacher Chen Chang-rui (陳昌瑞) in fifth grade.” The adolescent Kuo was astonished by the beauty of Chen's music on the piano, and became ever more determined to make beautiful music.

Although Kuo was born to a well-off family, he chose to not fulfill his father's expectations of becoming a doctor. Instead, he earned his uncle's support and departed for the Tokyo College of Music to study musical theory and composition in 1941.

Although he dreamed of playing the violin, he chose theory over performance because of a congenital issue with his left hand - his left pinkie was bent. Because of the clinodactyly in his little finger, Kuo was unable to play the piano and had difficulty playing the strings on the violin.

Among the first generation of Taiwan-born composers, Kuo was the only composer who achieved such quantity and quality. He is rivaled only by Jiang Wen-ye (江文也), a prolific composer revered as "The Chopin of Taiwan.”

Kuo believed that the humanity, culture, and spirit of the nation cannot be reflected by Western classical music. Thus he devoted his entire life to creating music such as "Ode to Taiwan (臺灣頌)” that would represent Taiwan's cultural roots and resonate with the people when they sing.