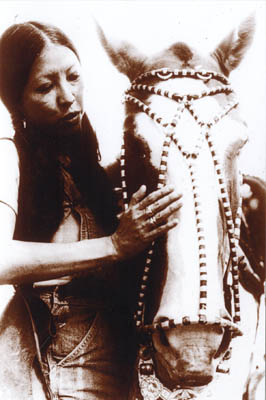 Although she is known as "Sanmao (三毛)" to most readers, the nom de plume meaning "30 cents" was one that Chen Mao-ping began using later in life, especially during her Sahara travels. She once remarked that her choice of pseudonym was in part because as a child she loved comic artist Zhang Leping's (張樂平) "The Travels of San Mao (三毛流浪記)," and in part because she believed that the things she wrote about were very ordinary, and "only worth about 30 cents."

In school, a young Chen showed a gift for the humanities, but much less so for math and science. At one point a teacher suspected her of cheating and scolded her in front of her classmates, causing such trauma that she began frequently skipping classes and going to the cemetery or library to read; ultimately she dropped out entirely.

She spent a period shut away at home, during which time she began learning painting from oil painter Ku Fu-sheng (顧福生). When Chen told him she felt she had no talent for art, he gave her a bundle of notebooks and magazines of modern literature, which served as tremendous comfort for her.

With Ku's encouragement, Chen began to explore the world of literature, finding her own direction as she began to familiarize herself with the Taiwanese literature scene of the time. She submitted a piece to a good friend, Pai Hsien-yung (白先勇), who published it in the periodical "Modern Literature (現代文學)," opening up a crack in her closed-off heart and changing her life forever.

In 1967, Chen set out for Spain, studying at Madrid University's School of Philosophy, and then headed to the Goethe Institute in Germany before eventually working for a time in the law library at the University of Illinois in the United States. In 1970, she returned to Taiwan, accepting a position teaching in the German and Philosophy Departments at Chinese Culture University. After her fiancé passed away in 1972, Chen returned to Spain and reunited with an old love, Jose Maria Quero Y Ruiz.

In 1973, at the request of the United Daily News in Taiwan, she begins writing under the pen name Sanmao, producing humorous, flowing text about her life in the Spanish Sahara (now Western Sahara). Her husband Jose died in a diving accident at the Canary Islands during 1979, and two years later, Chen decided to return once more to Taiwan.

Wandering the globe, Chen opened up a window on the world for her readers. She was able to depict life on the sprawling Sahara with vibrant and vivid prose, and in the process crafted a classic of modern travel writing. Her love of life during this period of time had a profound impact on her friends and family. She died at the age of 48.

In January 2011, to mark the 20th anniversary of Chen's passing and shine a light on her brilliant life story, the National Museum of Taiwan Literature hosted "Olive Tree Dreams: Remembering Sanmao." The bilingual exhibition website remains up and running today, giving book-lovers a chance to explore her free spirit and the depth and sincerity of her writings through manuscripts, cherished items, and scattered records of her travels.