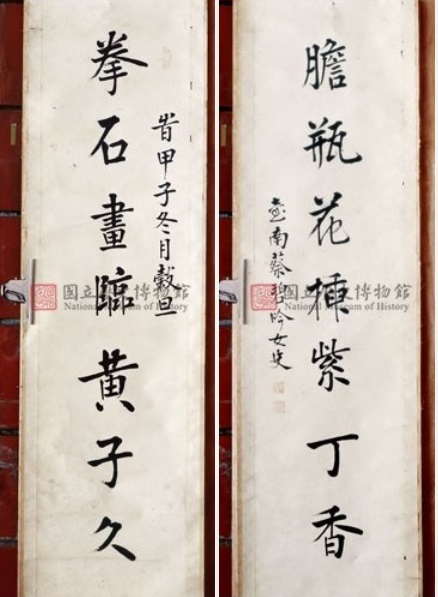 • Birth Name: Tsai Bi-yin (蔡碧吟)
• Born: 1874
• Died: 1939
• Birthplace: Tainan
• Did You Know That …?
Tsai gained prominence for her exquisite poems and her skilled calligraphy. Her works in both art forms were described as "green jade" — a gemstone once deemed the most precious of all materials in ancient China. In her later years, when forced into treatment for a tobacco addiction, calligraphy became Tsai’s salvation, and she spent her days in a Tainan hospital refining her skills.

Although Tsai is among the female literati who transformed Taiwan's literary landscape, her talents have oftentimes been shadowed by her love life, which was considered a challenge to the accepted conventions of her time.

Born in 1874, Tsai was the daughter of renowned Tainan intellectual Tsai Kuo-lin (蔡國琳). Having started her education at an early age, Tsai rose to fame during the Japanese colonial era (1895-1945) for her poems and calligraphy, which were said to have no equal in the past three centuries and earned her the title of "The Literata of Chihkan (赤崁才女)," with Chihkan being an old name for Tainan.

Though Tsai's original manuscripts are mostly lost, her works are still included in published collections today, taking readers through the idyllic scenery of old Tainan and appealing to many with the freshness of her writings.

Tsai practiced calligraphy by studying the thin yet powerful strokes of classic calligrapher Liu Gongquan (柳公權), as well as Wei bei (魏碑), a distinctive style of calligraphy originating in the Northern Wei Dynasty (386-534). Having excelled in the art form, Tsai's works were in high demand, until her life took a darker turn when she decided to walk down the aisle with a previously married man, Lo Hsiu-hui (羅秀惠).

Tsai was betrothed to her father's favorite pupil Lai Wen-an (賴文安) when she reached 20, but they never fulfilled the arranged marriage as the groom-to-be passed away after years of coughing up blood. Tsai was said to have tended to her ill fiancé before his passing and had decided to preserve her chastity after the death of Lai, which earned her a reputation for purity and once again made her a household name in the centuries-old city.

Lo, another gifted student of Tsai Kuo-lin, was known for his free spirit, as well as for his thirst for alcohol and fair women. He started to work for then-major newspaper "Taiwan Daily News (臺灣日日新報)" in 1908, a year after he married Wang Wang-shih (王罔市), a highly educated geisha. Wang was mesmerized by Lo's literary talent, but she was not the only one under the spell of Lo's roguish charm.

Following the passing of her father, Tsai, with her inherited fortune, grew smitten with Lo, and the two exchanged letters from time to time. She wrote him affectionate poems and offered a large amount of money to pay off Lo's debt and cover his fiscal extravagance. Lo divorced Wang in 1909 and married Tsai two years later, moving in with her family and causing a huge stir among the gentry and Tsai’s admirers.

As Tsai's father, Lai, and Lo had all passed provincial civil examinations, people would often jokingly sum up her relationships by saying she had "one father, two husbands, and three successful candidates in provincial civil examinations" — a taunt that reflected how unwelcome Tsai's marriage with Lo was in her time, despite her never having actually been married to Lai, her dead fiancé.

From the moment Tsai took an interest in literature, she entered a culture in which women have traditionally been on the passive side of things. However, Tsai, among other talented females of her time, dared to make the literary scene so captivating that she helped change the game.

In 1930, together with female poets and young women from prestigious families, she founded the all-female Yun Hsiang Poetry Society (芸香吟社) in Tainan. While Tsai served as the president, accomplished poet Shih Chung-ying (石中英) was the director.

Also known as the Hsiang Yu Poetry Society (香芸詩社) or the Hsiang Ying Poetry Society (香英吟社), they reached a milestone with their participation in the Taiwan Island-Wide Poetry Conference (全島聯吟大會) in 1930, which was held in commemoration of the 300th anniversary of the Dutch East India Company’s construction of the strategic stronghold of Fort Zeelandia in Tainan in the 1620s.

At the high-profile event, society members presented epigraphs and writings which were later published in the "369 Newspaper (369小報)," a Mandarin-language publication that provided poetry, anecdotes, and other writings, for three consecutive issues.

Though Taiwan's civil groups, including the all-women society, were under strict control by Japanese authorities after 1930, the Tsai-led group helped get women's voices heard through the building of solidarity. The society also shone a light on a variety of female-oriented topics, enriching the Taiwanese women's movement that still marches on today.