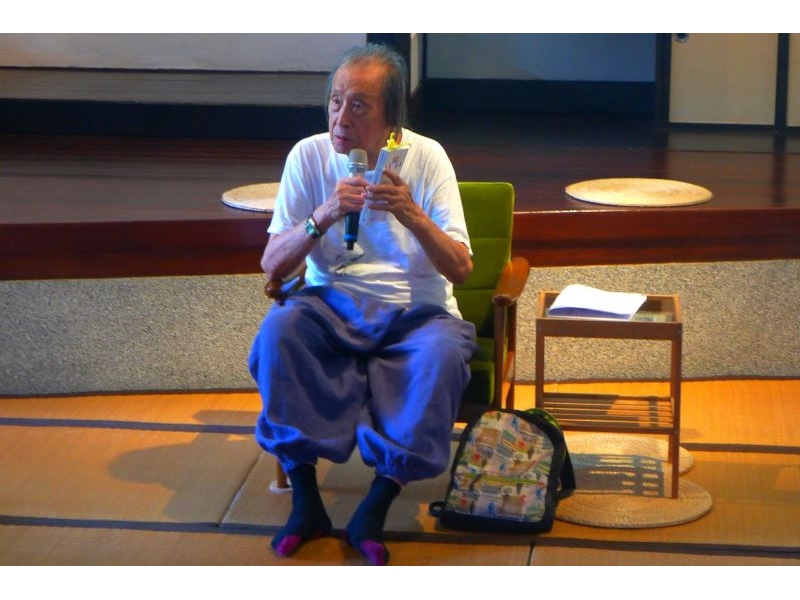 ‧ Chinese name: 管運龍
‧ Date of Birth: September 27, 1929
‧ Date of Death: May 1, 2021
‧ Place of Birth: Qingdao, China
‧ Did You Know?
Kuan Yun-loong was a recipient of the Modern Poetry Prize and the Poetry Prize of the Hong Kong Association for Literature and Art. He was not only a poet—he was also an essayist, painter, poetry recitalist, performance artist, screenwriter, and was once a finalist for the Golden Horse Award for Best Original Screenplay. His poetry was not confined by any form, and his life was marked by a drive to do as he pleased. His works have become a powerful inspiration for the literary world of Taiwan.

Born in 1929, the poet Kuan Kuan (born Kuan Yun-loong) was known as the “mischievous child of poetry.” He was famous for his elegant and eccentric style of writing, and dedicated much of his long life to the literary world. Through his work, he became one of the most important modern poets in the history of Taiwanese literature, with works spanning poetry, prose, and plays. Kuan showed great skill in art and literature from an early age.

At the age of 17, his imposing stature saw him recruited into the Nationalist Army, and later he found himself decamping to Taiwan with that same army. After arriving on the island, he took up various jobs, including reporter for Zuoying Military Radio and host for Hualian Military Radio. By the age of 19, he had developed a passion for martial arts novels, beginning his work on “The Legend of the Swordsman of Zhushan.” However, that passion proved insufficient to get him to the finish line on the book and his enthusiasm waned, but nevertheless, what had been written still helped sow the seeds of a literary future.

In addition to literature, Kuan was also fascinated with Chinese opera, watching performances of Peking opera, crosstalk, “plum blossom” opera, Shandong drumming, and more, providing another side to his artistic insight. In his poem “I am Me,” he wrote, “I love to sing arias as I walk the streets.” From this we can see that he was clearly a devoted fan of the art.

During his still-secure military career, Kuan studied art and literature in his downtime and once performed an adaptation of the play “The Imperial Commissioner” with poet Shu Lan and others, which was a sensation in Yilan. Later, he was transferred to Kinmen but continued his efforts tirelessly. Not only was he influenced by the work of poet Ya Xian, he also had the opportunity to meet him, along with others including Chang Mo, Zhou Ding, Xia Jing, Yu Kwang-chung, Rongzi, Tan Zihao, Zhou Xiadie, and Cao Jiezhi, exchanging poems and ideas with them. He had the most such interaction with Ruan Nang of the Blue Star Poetry Society, making tremendous progress under his guidance, having pieces published in Blue Star and Epoch Poetry Quarterly. With a love for surreal modern poetry, he joined the Epoch Magazine and even spent two terms leading the team.

From 1963, Kuan’s works began to attract particular attention, being selected for the New Poetry Award by the Hong Kong Modern Literature and Art Association and sharing the prize with fellow modern poet Ya Xian. In 1973, he won the top prize at the 42nd Chinese Modern Poetry Awards and had some dozen pieces selected for the associated publication. Also honored that year was poet Wu Sheng.

In addition to his literary work, he was also an avid painter and performer, holding numerous exhibitions and participating in theater productions. He performed in more than 30 movies and TV shows, such as “The Legend of the Six Dynasty,” “Super Citizen,” “Out of the Blue,” “Run Away,” “Applause,” “Liang Zhu,” and “Secret Love in Peach Blossom Land.” “The Legend of the Six Dynasty” was nominated for the Golden Horse Award for Best Original Screenplay. In 1982, he was invited to join the International Writers Workshop at the of Iowa.

In his later years, he lived a happy life, reading, painting, and writing extensively, pursuing his love of literature, history, philosophy, drama, and art. Writer Bai Ling even described him as “superlative”—a superlative poet, a superlative person, a superlative performer, a superlative speaker, and a superlative singer. More than that, though, he was described as “a poet indispensable to the world.” After more than 60 years of writing, Kuan Kuan passed away on May 1, 2021, at the age of 92. His passing leaves a legacy that ensures that he will be forever missed.