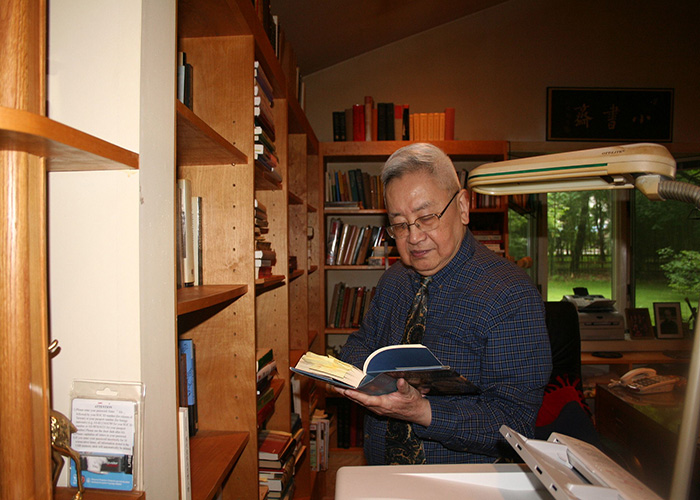 ．Chinese Name: 余英時
．Date of Birth: 1930
．Place of Birth: Tianjin, China
．Did You Know?
Yu Ying-shih was born in Tianjin, China in 1930. He first studied with Qian Mu, a prominent scholar of Chinese studies, and then went to Harvard University in the United States to obtain a Ph.D., specializing in interpreting traditional Chinese thought with modern academic methods. The most influential Chinese intellectual in the contemporary era, Yu has played a pioneering role through his research on Chinese history, especially in the area of intellectual and cultural history.

Yu Ying-shih was born in Tianjin in 1930. When the Sino-Japanese War broke out in 1937, he moved to his hometown in Jincheng Village, Anhui Province, and received a traditional Chinese private school education. During this period, his learning was interrupted several times. In 1946, he went to Shenyang with his father to study history at Northeast Chung Cheng University, and dropped out the next year. In June 1949, he was admitted to the history department of Yenching University, and applied to join the Chinese New Democracy Youth League (the predecessor of the Communist Youth League of China). After leaving school in 1949, he moved to Hong Kong and entered New Asia College and New Asia Institute of Advanced Chinese Studies in 1950 under the tutelage of Sinology master Qian Mu. He graduated two years later as the first graduate of New Asia College. After graduating, he taught in elementary schools in Hong Kong for two years, and then studied at Harvard University in the United States under the tutelage of Professor Yang Lien-sheng, a contemporary Sinology scholar. He received Western academic training and obtained a Ph.D. in history, and spent the rest of his career in the United States. Although he visited Taiwan several times, he only stayed for about a month each time, and was elected as the 10th academician of Academia Sinica in 1974. In the 1980s, being overseas most of the time, he published many political articles for Taiwan and spoke out for non-partisan movements, earning him the respect of authorities in the Republic of China.

In addition to being an honorary professor at Princeton University, Yu was also an associate professor at the University of Michigan and a professor at Harvard University. Yu received numerous academic awards and honors from Taiwan and abroad, including the Executive Yuan Cultural Award in 1991, the election to the American Philosophical Society in 2004, the John W. Kluge Prize for lifetime achievement in the study of humanity, as well as the first-ever Tang Prize in the Sinology category in 2014.

In addition to academic research, Academia Sinica said that Yu is also a public intellectual who cares about society and upholds the values of freedom and democracy. After winning the first Tang Prize in the Sinology category in 2014, he commissioned the Institute of History and Philology at Academia Sinica to set up the "Yu Ying-shih Award in Humanities Research (余英時先生人文研究獎)" in order to encourage young scholars to enter the field of humanities research. He spared no effort in supporting and cultivating many historians, including Chin-shing Huang (黃進興), Chen Jo-shui (陳弱水), Kang Le (康樂), Wang Fan-sen (王汎森), and Lin Fu-shih (林富士) at Academia Sinica’s Institute of History and Philology (歷史語言研究所). In 2019, Hong Kong amateur astronomer William Kwong Yu Yeung (楊光宇) named asteroid 28966 after Yu Ying-shih in recognition of his contributions to Chinese-American history and Sinology.

Yu Ying-shih had been publishing articles in the press since 1951. He has written many books in his life, including 59 Chinese and English books and more than 400 research papers. He explores traditional Chinese thought with modern academic methods, including theories of anti-intellectualism in ancient China, monarchy and Taoism, inward transcendence and outer transcendence, axial breakthrough, and the unity of man and nature, which has influenced global Sinology research for half a century. Yu Ying-shih's "History and Thought (歷史與思想)" published in 1946 includes "Anti-Intellectualism and Chinese Political Tradition," which caused a sensation on both sides of the Taiwan Strait due to its critique of modernity through traditional lenses in a satirical manner and "The two worlds of Hung-lou meng," which caused a stir in the world of Redology (academic study of Cao Xue-qin's Dream of the Red Chamber). Yu's later works have left a deep impact on Taiwanese academic circles, including "Zhu Xi's Historical World: A Study on the Political Culture of the Scholar-Officials in the Song (朱熹的歷史世界：宋代士大夫政治文化的研究)" and "Between the Heaven and the Human – An Exploration into Origin of the Chinese Mind in Classical Antiquity (論天人之際：中國古代思想起源試探)."

Yu Ying-shih passed away on August 1, 2021 at the age of 91. Academia Sinica published an obituary pointing out that Yu Ying-shih "studied Chinese thought, politics, and cultural history in great depth, connecting ancient times and modernity, which is a rare pursuit in today's academic circles. In addition to academic research, he was also a public intellectual who cares deeply about society and safeguards the values of freedom and democracy."