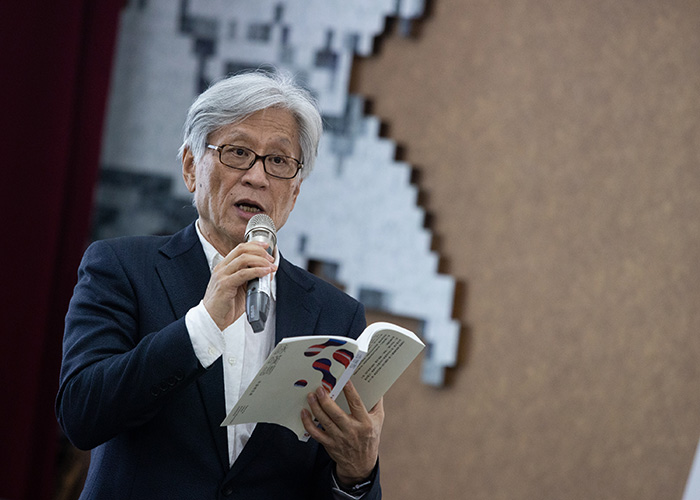 Chinese Name: 李敏勇
Year of Birth: 1947
Place of Birth: Qishan, Kaohsiung, Taiwan
Did You Know?
Poet Li Min-yong's works are mainly poetry, prose, and cultural commentary. His poetic language has a historical dimension and philosophical reflection, presenting a unique artistic style and leaving a testimony and introspection regarding modern Taiwanese poetry and society. In 2022, he was awarded the 41st National Cultural Award for his long history of translating and publishing poems by foreign poets, promoting exchange between Taiwanese and international literature, and contributing to the promotion of Taiwanese art and literature.

Li Min-yong, also known by the noms de plume Li Ming and Fu Min, was born in 1947 in Qishan, Kaohsiung, and attended Kaohsiung Senior High School in Kaohsiung City. He once wrote a short inspirational essay about his experience of hiking in the Central Cross-Island Trail that was published in the "Words of Wisdom" supplement of the Central Daily News, the first of his works to be published in a newspaper. After graduating from National Chung Hsing University with a degree in history, Li Min-yong took up work as a high school teacher and newspaper reporter. He has been writing since the late 1960s, with works that span fiction, prose, criticism, and translation, with a focus on poetry. In 1973, he began writing works related to the February 28th Incident. In 1974, he moved to Taipei to work for Cathay Capital Advertising. In addition to writing and translating poems, he also began to write commentary columns, showing his concern with social movements and environmental protection issues, and taking part in the work of social and cultural transformation.

In 1987, influenced by the February 28th Justice and Peace Movement, he began his search for the truth behind the incident. Li likened himself to a reborn ghost of the February 28th Incident, a man of a generation that grew up amidst the blood, tears, and sacrifices of his forebears. He stressed his responsibility to explore the meaning and spirit behind the February 28th Incident, and his hope that the memory of the victims could be revitalized, which led to him writing a number of related poems, essays, and novels. Li has said that this movement was one to help the Taiwanese people truly confront their own history and seek reinvigoration in the wake of war, and is one of great significance to Taiwan. He also wrote a poem to this same end, "On This Day, Let Us Plant a Tree (這一天，讓我們種一棵樹)," using the ritual of planting a tree as a metaphor for regeneration and restoration. Later, he collaborated with composer Tyzen Hsiao to rewrite the poem into a song called “Love and Hope (愛與希望)," which was arranged by Hsiao into his "1947 Overture (一九四七序曲)" to become one of its two choruses. It has often been sung at February 28th commemorative events since the 1990s.

Li’s literature is underpinned by a strong social sentiment, and his involvement in public affairs has made him an important figure in molding the postwar generation of Taiwanese literati. In 1991, Li called on peers from the arts, literature, academia, politics, and social movements who were born in 1947 to form the 47 Society and get involved in laying the groundwork for the Taipei 228 Memorial Hall. He also wrote the books "Awakening and Regeneration (覺醒與再生)" and "Reconstruction and Transformation (重建與改造)" to record the efforts of the movements of the 1990s. Li’s various efforts in regard to social engagement are clearly insightful and poetic, revealing the humanistic ideals behind his actions and making him one of the most active cultural and social activists in Taiwan.

The poems of Li Min-yong, meanwhile, are characterized by a combination of profound realism and aesthetic modernism, managing to be profoundly moving without being trite or superficial and penetrating without being flashy or insubstantial. Combining anti-war spirit with historical contemplation and realistic social criticism, Li has created an open space in the Taiwanese poetry scene for poetry that is concerned with politics and history, establishing a model for cultural discourse through poetry.

In addition to all of this, Li Min-yong has served as editor-in-chief of the poetry journal "Li Poetry (笠)," president of the Taiwanese Literature Society, and chair of the Taipei Chinese Center of PEN International. He has been honored with the Wu Yong-fu Literary Criticism Award in 1980, the Wu Zhuo-liu New Poetry Award in 1992, the Lai Wen-ho Literature Award in 1998, the National Awards of Art in 2007, the Wang Kanglu Human Rights Award in 2012, the Oxford Prize for Taiwanese Writers in 2019, and the Golden Melody Awards for Traditional Arts and Music Best Lyrics Award in 2019. In 2022, he was recognized with the 41st National Cultural Award. The Ministry of Culture said that this award is granted to those who have made outstanding achievements in the field of literature. In addition, he has made efforts to promote Taiwanese art and culture internationally, making the world aware of the beauty of Taiwanese culture and promoting the exchange of art and literary talents, contributing a great deal to the art and literature world in Taiwan, making him more than deserving of the award.