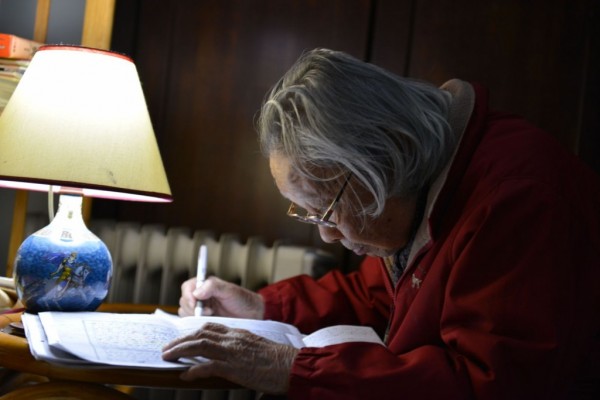 The late Chung Chao-cheng was the first National Cultural Award winner of Hakka ancestry. He was also the first roman-fleuve (river-novel) writer in Taiwan who has helped the formation of Taiwanese novels and modern literature. His accolades include the Wu San-lien Literary Awards in 1979 and the National Award for Arts in 1999.

After a humble childhood upbringing, Chung followed his father's career path as a teacher and served at his local elementary school in Longtan Township, Taoyuan County until 1979. He picked up writing in 1951, and rose to fame through the popularity of his first novel "The Dull Ice Flower (魯冰花)" in 1960. Chung then grew into a writer whose works encompass novels, biographical pieces, prose, and translation.

Chung's release of the three-volume roman-fleuve "Muddy Water Trilogy (濁流三部曲)" in the 1960s marked a milestone in the history of Taiwanese literature. Written from an autobiographical perspective, the saga reflects the melancholy and struggles of the Taiwanese youth in Chung's era.

His following series — "Taiwanese Trilogy (台灣人三部曲)" — became one of the most representative works on the history of Taiwan. With the story setting spanning from the period of Japanese occupation to the retrocession of Taiwan, the trilogy depicts the armed resistance against Japanese rule, the proletarian movement, and the surrender of Japan.

Chung said that he would always observe the world with sympathy. He believed that sympathy and critique are connected as critique comes from people's innate sense of justice. Thus, Chung wrote literary works based on sympathy and humanitarianism to reveal the injustice and social issues of his time.

In addition to his dedication to literature, Chung was a key figure in the Hakka Language Restoration Movement (還我客家母語運動) for the right of using Hakka language in public. His advocating of Hakka culture also prompted the establishment of the Taiwan Hakka Association for Public Affairs (台灣客家公共事務協會) and the Formosa Hakka Radio Station (寶島客家電台).

Chung nourished Taiwan's literary world for decades and continues to serve as a source of inspiration for Taiwanese writers. As a tribute to the Hakka maestro and to cultivate more talented writers in Taiwan, the Chung Chao-cheng Literary Award (鍾肇政文學獎) was launched in 2015.