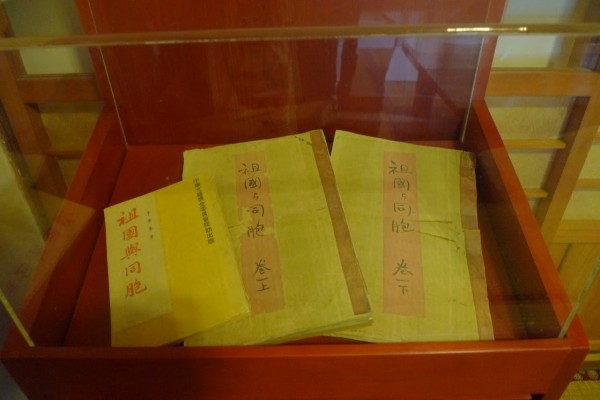 Lee Rong-chun was a novelist whose literary works only came to light after his death in 1994. Lee’s works, which encompass short stories and novels, offer glimpses into the daily life and social development of Yilan from the era of Japanese rule to post-war Taiwan. Though he never lived to enjoy fame, his works are honored and appreciated for his style and insights today.

Born under Japanese colonialism, Lee started learning Chinese at a private school when he was sixteen, and developed an interest in writing since 20. In 1938, Lee joined the army troops deployed for agricultural missions in China and served in Shanghai, Nanjing, and Shou County until 1946.

After coming back to Taiwan with only two boxes of draft manuscripts and books, Lee began his lifetime vocation as a writer. Lee’s experience of seeing Chinese people suffering under Japanese rule inspired him to write his first novel – “Homeland and Comrades (祖國與同胞).”

Comprising 600,000 words, the novel illustrates a young intellectual’s aspiration and human instinct to survive in colonial Taiwan. With a writing style that is highly autobiographical, the novel reflects his personal thoughts on existential meaning and social morality in times of turbulence.

Following “Homeland and Comrades,” Lee continued writing several novellas and novels – most of which were related to his own life events. “The Man Who Returns Home (海角歸人)” and “Dreams in a Western-Style Building (洋樓芳夢),” for example, mirror his life goals as well as the solitude and loneliness of a writer in early Taiwan society.

“80 Years Old (八十大壽),” “Nostalgia (鄉愁),” and “In Memory of Mother (懷母),” on the other hand, portrayed the development and lives of the Lee family supported by his mother. These texts recollect life before and after her death, and express his love and gratitude towards her.

Lee’s prolific works were discovered by his family upon his death in 1994. Two years later, “In Memory of Mother” was published posthumously, followed by a rapid publication of his other novels. Lee’s lifelong writings finally gained attention and stunned the public for his rich contents.

Through Lee’s honed perspective and vivid words, the people, society, and history of Yilan and colonial Taiwan are well documented in his works. His literary legacy became an important reference for understanding the defining spirit and mood of his time.