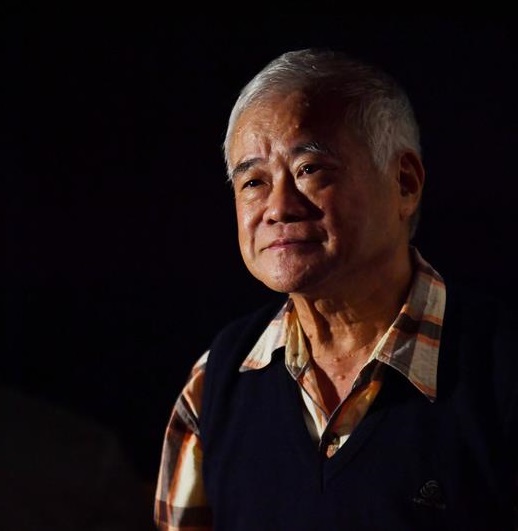 Hu Ding-yi is a senior Foley artist who has dedicated four decades to making audio effects for cinema. Being skillful in reproducing sounds of everyday life with any tools he can obtain, Hu has created sound effects for more than 100 films, including "The Strawman (稻草人),” "Banana Paradise (香蕉天堂),” and "Jump Ashin! (翻滾吧! 阿信),” which were all nominated for the Golden Horse Award for best sound effects.

Hu first joined the Central Motion Picture Corporation in 1975 as an apprentice to the sound department, where he learned how to conduct sound recordings, screen films, and create sound effects.

Hu's job as a sound technician continued until 2001, when the company purchased its first batch of professional digital recording equipment. Although he was initially unfamiliar with the new technology, Hu turned his focus to reproducing sounds and has since been inseparable from the world of Foley.

As a Foley artist, Hu plays an important role in enhancing the auditory experience of films and making films feel more real and natural. In addition to be highly inventive and creative, a Foley artist also has to know each scene intimately and react quickly to match sounds with action. This is considered by Hu the most difficult part of the job.

After years of experience and observations, Hu has become somewhat of an audile - a person whose mental imagery is auditory rather than visual or motor. This allows him to imagine and reproduce sounds of an object by using a wide range of tools to create a richer and hyper-realistic track. For example, he once used a fish head to create sounds for the eyeball-crushing scene in the 2017 drama "The Last Painting (自畫像)” by director Chen Hung-yi (陳宏一).

Hu noted that though advanced technology has made it possible to record sounds simultaneously while filming, there are still scenes that cannot be completely satisfied by canned sound effects. For example, the sound of flipping newspapers will depend on different humidity levels, room space, and the thickness of the paper.

After working behind the curtain for decades, Hu's job as a Foley artist has been brought to the silver screen by director Wang Wan-jo (王婉柔). "A Foley Artist (擬音)” brings to light the little-known career of Foley artists in Taiwan, the sound history of Taiwan cinema, and how Hu became named Outstanding Taiwanese Filmmaker of the Year by the 2017 Golden Horse Awards.