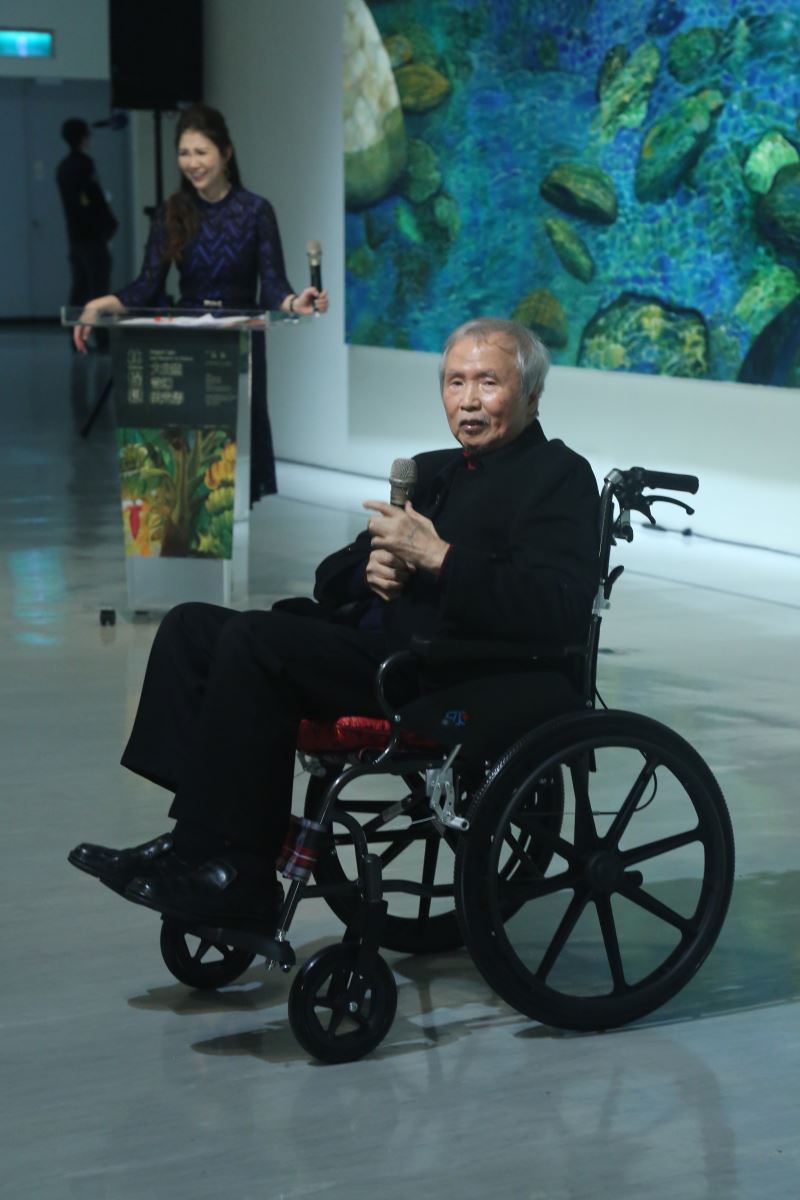 Lin Hsin-yueh's parents passed away when he was young, and so he led a rough life of being shuffled between relatives and orphanages. Nevertheless, he showed a gift for art from a young age. In 1961, he tested into the Department of Fine Arts at National Taiwan Normal University where, because of financial constraints, he chose to make watercolor his primary medium. After graduating, he traveled to Europe to continue studying painting.

In the 1970s, Lin's painting style began trending toward the surrealist, using mysterious colors to depict objects that transcended time and space. This creative period was aimed at expressing the self-analysis of internal consciousness and exploring the essence and nature of existence.

After 1980, his works began to slip away from the shackles of theoretical forms, moving instead toward themes of realism and focusing more on interpreting Taiwan’s natural environment. By visiting the mountains, river valleys, and rushing streams of this island, he began to incorporate what he witnessed into his paintings, creating a fantastical and primal style that is now highly recognizable.

In addition to his artistic work, Lin has also been an active cultural critic, publishing several books including "A History of Taiwanese Art (台灣美術史)" and "100 Years of Chinese Oil Painting (中國油畫百年史)." He has submitted articles to several magazines, written art books, and published personal essays on the development of Taiwan’s art environment, as well as analysis and criticism of artists, artworks, and trends.

The exhibition "Lin Hsin-yueh: Magical Light and Shadow in Nature," which was held at the National Taiwan Museum of Fine Arts in Taichung in spring 2019, offered an in-depth insight into Lin's lifelong observations and interpretations of nature through his paintings. An important aspect of this exhibition was that it brought together many of the awe-inspiring larger works he has produced in recent years.

The epic grandeur of these works is characterized by their massive size, magnificent structure, brilliant use of light and shadow, and beautiful colors. Through the majestic views in these paintings, the audience can feel the charm of the Taiwanese landscape with each brush stroke, as well as the power of the times captured in these images of his motherland as seen through Lin’s eyes.

Among the pieces on display was the enormous, epic piece "The Story of Qingshui River (一條清水溪的故事)." This three-meter-tall, 18-meter-long painting completed in 2018 is the crystallization of the artist's long-time observations on Taiwan's rivers and rocks. Lin also stated that the exhibition was dedicated to his late poet friend Yu Kwang-chung (余光中), in commemoration of the deep friendship the two found through literature and art despite their different backgrounds and political beliefs.

Lin, who suffers from Parkinson's disease, remarked that "Painting is a lifelong career that only ends when one's paintbrush drops upon the arrival of death." Such a tireless commitment to art is truly moving, and both his art and boundless energy have shaped the trajectory of Taiwanese modern art.