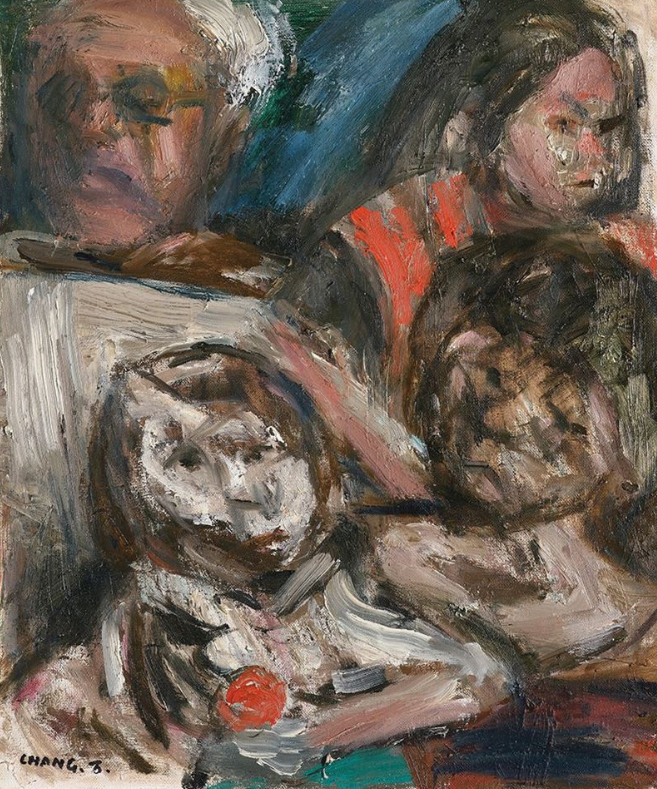 • Name: 張萬傳
• Born: 1909
• Died: Jan. 12, 2003
• Birthplace: Tamsui, New Taipei City
• Did You Know That …?
• Chang Wan-chuan did a tearful self-portrait in 1985, a seemingly fruitful year for his career, as an expression of loneliness. Evincing agony and sorrow, the painting was made following the death of his close fellow painter Chen Te-wang (陳德旺) in 1984, four years after his long-time artist friend Hung Jui-lin (洪瑞麟) relocated to the United States.


Hailed as the "Father of Taiwan's Fauvist Movement," Chang Wan-chuan was not an overnight sensation, but rather a Taiwanese testament to the power of unrelenting artistic passion. With his unchained spirit and command of bold colors and heavy strokes, the artist-educator found fame in the 1970s when he was in his sixties.

Chang was named Wan-chuan to commemorate two sayings — the Mandarin idiom "remembered by ten thousand generations (萬世流傳)" and the Taiwanese expression for "having children later in life (慢傳)," as his mother conceived him in her thirties, which was an age considered late to bear offspring at that time. Unlike most artists who manifest artistic interest from an early age, Chang began his journey of art when he started studying painting in 1929 at a private art institute funded by Ni Chiang-huai (倪蔣懷), a painter who had mentored a number of Taiwanese artists.

In 1931, following the steps of local artists, Chang furthered his studies in art at Japan’s Teikoku Art School, which is now called Musashino Art University. Although he dropped out of the school a year later because its curriculum was not what he had expected, Japanese Fauve artists who liberated color from its descriptive functions had an enormous influence on Chang's artworks.

Chang, under the influence of French Impressionist artist Maurice Utrillo and Saeki Yuzo, a Japanese painter who encouraged Fauvist Expressionism, went on to alienate himself from Taiwan's mainstream art establishments with his untrammeled painting style.

Upon returning to Taiwan, Chang and fellow artist friends such as Chen Te-wang and Hung Jui-lin launched Cercle MOUVE (MOUVE行動美術學會), a new art association that sought to differentiate itself from the established Tai-Yang Art Association (台陽美術協會), in 1938.

It was also the same year that Chang started to teach at Xiamen Academy of Fine Arts (廈門美專) and frequently commuted between Taiwan and the island city in southeast China. The landscape in Xiamen and Gulangyu, an island off the coast of Xiamen, thus became the main subjects of his paintings during this period. Furthermore, Chang's painting "Gulangyu Scenery" was the only Taiwanese work selected by the inaugural Taiwan Government Fine Art Exhibition in 1938.

Chang raised a family of five children on his earnings as an artist and a teacher, which was not an easy feat in 20th-century Taiwan. However, his passion for art helped him prevail through hardships in life. Upon retirement, Chang left half of his pension to his wife and used the other half to cover expenses for his inspiration-seeking travels. It was at this time that he finally made it to Paris, the city that every artist longs to visit.

Throughout his life, the Tamsui native held onto his paintbrush until he suffered from a stroke in his nineties. Among all the subjects he painted, Chang found himself catapulted into the public eye for his portraits of fish. The late painter once jokingly said his fish paintings are so vivid that cats can smell the strong scent of fish just by looking at the canvas.

Remembered as a man of few words, Chang sought to convey messages and emotions through art. Taiwanese painter Sun Ming-huang (孫明煌), one of Chang's students, said the late artist never taught with textbooks and rarely touched upon art theories, but instead demonstrated how a painting should be done with each brushstroke.