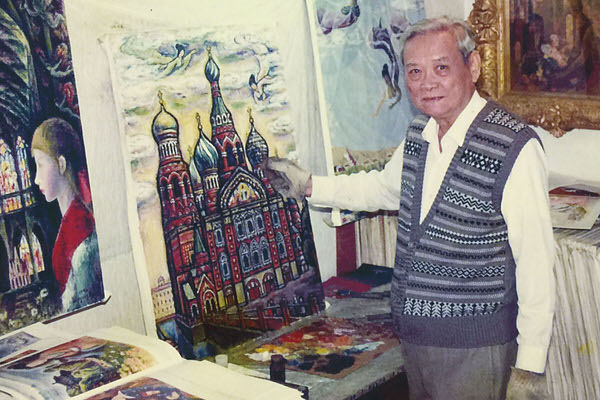 Name:許武勇
Born: 1920
Place of Birth: Tainan
Did You Know…?
As a doctor, one bears witness to birth, aging, sickness, and decay. This experience helped Hsu Wu-yung shape the personal credo, which he had said time and again: "Physical life always comes to an end at some point. The only thing that can live forever is art." Only through art, he believed, we can pass on the beauty of life and thought forever.
Site: https://www.wuyunghsu.com﻿


Hsu Wu-yung was born in Tainan and grew up molded by the Japanese education system, ultimately becoming one of the most important painters in Taiwanese modern art history. He graduated from Taihoku Higher School (now National Taiwan Normal University), studying art under Tōho Shiotsuki. In 1941, he traveled to Japan to study medicine at Tokyo Imperial University (now the University of Tokyo). During this time, he also studied sketching under Karoku Higuchi.

He practiced charcoal drawing in Higuchi's studio during those four years, focusing on figure studies and laying a solid technical foundation. His work was also chosen to be shown at the Dokuritsu Fine Arts Society Exhibition. After World War Two, he received a scholarship to attend the University of California. During the years in the United States, he had visited numerous museums to study the works of various artists and also held exhibitions of his own. After returning to Taiwan, he practiced medicine in various places around the island and continued to paint, having his works shown at the Provincial Exhibition and Taiyang Exhibition for more than 20 years. He retired from medicine in 1987 to become a full-time artist.

"The Crossroad (十字路)," the first work which was shown in an exhibition, was created in 1943 while he was still studying at Tokyo Imperial University. Through the brush of Hsu, Taiwan is seen standing at a crossroad, unsure which road to take. This piece was selected for the 13th Independent Art Association (Dokuritsu) Exhibition held at the Ueno Royal Museum in Tokyo. At the time, his art teacher Karoku Higuchi said to him, "You're better suited to being a painter than a doctor." This encouragement and his strong showing saw him selected for acceptance to the Dokuritsu Fine Arts Society, which reinforced the then-24-year-old Hsu's determination to pursue the path of art. In 1944, he graduated from Tokyo Imperial University with a doctorate in medicine.

In 1945, upon the conclusion of the Second World War, Taiwan was turned over to the Nationalist Government of the Republic of China. The following year, Hsu returned to Taiwan and married Hsu Shu-hsiang (徐淑香). At the time, the Alishan Forest Farm (阿里山林場) happened to be looking for a doctor. The newlyweds moved there so that Hsu could take up the position. Later, he returned to Tainan and Kaohsiung to continue his practice. In 1947, the 228 Incident occurred, and some of Hsu's friends and relatives were among those killed. One day while running errands, he witnessed a public execution held at the Chiayi Railway Station. The White Terror followed, with more of his friends and relatives falling into misfortune. Taiwan's intelligentsia went deathly silent virtually overnight. In 1952, Hsu passed an exam and obtained a government scholarship to study in the United States. He went to UC Berkeley to study Public Health. Making use of his time abroad, he traveled across America visiting art museums and getting to know Western art.

In 1953, he held his first solo exhibition at Lucien Labaudt Art Gallery in San Francisco, becoming the first Taiwanese painter to hold an exhibition in the U.S. Upon returning to Taiwan, his works were shown at the annual Taiwan Provincial Fine Arts Exhibition (台灣省全省美術展覽會), with "A Rural Village (2) (農村(2))" winning the highest honor at the 10th Provincial Exhibition. In the subsequent decade, Hsu presented Cubist paintings at each annual exhibition, cementing his place as a pioneer of Cubism in Taiwan.

Returning to Taiwan after his studies, Hsu continued to practice medicine at the Luzhu Township Health Center in what is now Kaohsiung City's Luzhu District. However, to participate in more of Taiwan's art scene happenings, Hsu decided to relocate to Taipei City at the age of 46, opening the Wu-yung Clinic (武勇診所) and practicing medicine on the first floor while the second floor served as his personal studio. Hsu never gave up his dream of being a full-time artist. He used his income from practicing medicine to maintain his creative pursuit and take care of his family. During this period, Hsu also began to develop his own style of painting, "Romanticism." In 1987, he was diagnosed with colon cancer. Upon making a full recovery after surgery, he had the realization that life is fleeting and that he had limited time remaining to pursue his ideals. After successfully fighting cancer, he decided to retire from the medical profession and become a full-time painter.

As a doctor, one bears witness to birth, aging, sickness, and decay. This experience helped Hsu Wu-yung shape the personal credo, which he had said time and again: "Physical life always comes to an end at some point. The only thing that can live forever is art." Only through art, he believed, we can pass on the beauty of life and thought forever. After retiring, he cherished every minute and every second of his life as he devoted himself to his painting. His creations preserve his love for and identification with the world, life, and the land of Taiwan. Hsu Wu-yung published his final painting album in 2013, a summary of his life's work. In 2016, he passed away from old age in Taipei at the age of 96.