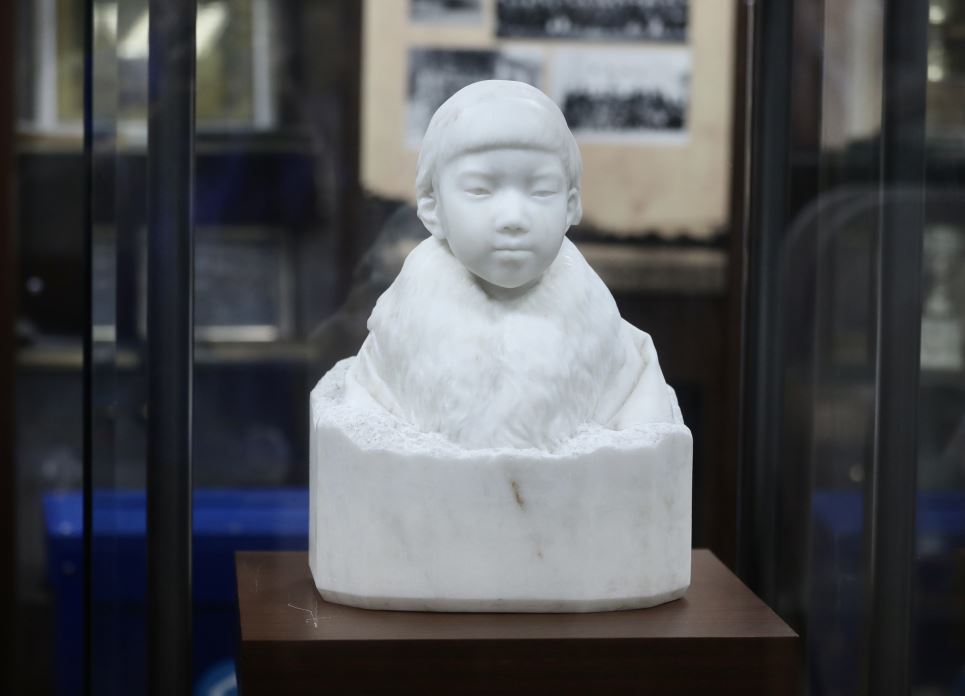 Name: 黃土水
Date of Birth: July 3, 1895
Date of Death: December 21, 1930
Place of Birth: Taipei, Taiwan
Did You Know That...?
Huang Tu-shui was born into troubled times, when Taiwan was being occupied by the Japanese army and the society was wracked with poverty and anxiety. Huang did not even start attending a public school until he was 12 years old. After completing his education at normal school, he taught for about half a year before being recommended for a place studying sculpture at Tokyo Fine Arts School. He even successfully applied for a three-year scholarship, something exceedingly rare in those days. In 1920, his artwork was selected to the Second Imperial Art Exhibition of Japan, a first in the history of Taiwanese art. He was not only the first Taiwanese participating in the Imperial Exhibition, but also the first Taiwanese artist making a reputation as a sculptor.


Huang Tu-shui was born in Monga (now Wanhua), Taipei, in 1895, the first year that Taiwan was under Japanese rule. He was the third child in the family, with an eldest brother who had already passed away and an elder brother eight years his senior. His father was a carpenter who repaired rickshaws. When Huang was 12 years old, his father passed away and so his mother took him to live with her brother in Dadaocheng ("Daitotei" in Japanese).

It was at this time that he began his studies at Daitotei Public School (now Taiping Elementary School). He would often visit the stores around Dadaocheng that sold carved statues of deities, getting exposed to the Fuzhou school of carving. Combined with the influence his father had had on him from an early age, this ultimately led to the young Huang developing a profound interest in the art of carving and sculpture.

In 1911, Huang Tu-shui was successfully admitted to the Education Department of the National Language School (now National Taipei University of Education). While there, he proved himself particularly adept at handicrafts and drawing, earning praise from his instructors. This is what ultimately cemented his determination to go into the arts, and sculpture specifically, in the future. In 1915, Huang graduated with outstanding grades and was assigned to work at his alma mater as a teacher.

After teaching for less than half of a year, Chief of Home Affairs under the Taiwan Governor Kakichi Uchida and school principal Shigeyoshi Kumamoto recommended Huang for a scholarship from the Taiwan branch of Toyo Kyokai. With his piece "Iron Crutch Li," Huang tested into the Tokyo Fine Arts School (now Tokyo University of the Arts) to study sculpture and woodcarving. This made him the first foreign student from Taiwan at that school and the first Taiwanese to study in an art program in Japan.

Huang cherished this hard-won opportunity to learn, dedicating himself entirely to his art. To save money for materials, he even limited himself to just eating sweet potato congee. In 1920, he graduated with outstanding grades and earned admission to the graduate school to continue his studies of sculpture.

That same year, his piece "Mountain Child Playing Flute" was selected for the Second Imperial Art Exhibition of Japan, becoming the first piece by a Taiwanese artist to be so honored. Over the next three years, his pieces "Sweet Dew," "Posing Woman," and "In the Country" were also selected for the Imperial Exhibition, and his masterful works captured increasing attention.

Huang's appearance at these three consecutive Imperial Exhibitions earned him some fame and he was favored by the Japanese imperial family and people in political and business circles, who had asked him to make busts or small animal sculptures on commission. In 1922, after completing his graduate studies, he returned to Taiwan and set up a temporary studio in Monga. During the time, he worked on replicating water buffalo and completed two wood sculpture works, "Mikadofasan" and "Sikahirsch," which had been commissioned by the Japanese imperial house and Empress Shoken. He married in that same year and took his newly-wed wife to Japan, settling down and setting up a studio in Ikebukuro.

Huang Tu-shui spent most of his life in Japan, but the rigor and strong connection to the homeland in his works always portrayed a strongly Taiwanese flavor. He is best known for incorporation of a real care for the land and the life upon it in his works of realism. Huang's pieces boast a distinctive style, so much so that he has been called a "clever and precious one" of the art world.

His well-known piece "The Water Buffalo" was created through a particularly painstaking process. Huang always had a particular liking for the Taiwanese water buffalo, and his works often drew upon the animal as a creative inspiration. He even kept a water buffalo himself, so he could observe it at close range and more accurately capture its charm. Day and night he worked on this 555cm-long, 250cm-wide large bas-relief art piece. The sculpture depicts an interaction between a boy and a water buffalo, reflecting a common rural scene of the time and exuding a strong feeling for the land and the epoch.

In 1930, Huang was suffering from severe abdominal pain, but he insisted on finishing "The Water Buffalo." Afterwards, he went to the hospital for treatment, ultimately dying from peritonitis caused by untreated appendicitis. In 2009, "The Water Buffalo" was named a National Treasure by the Committee on National Treasures and Important Historical Relics, becoming the first item from the 20th century to be so designated. In the 36 years of his short life, Huang Tu-shui created a number of precious works and left Taiwan with national treasures for preservation.