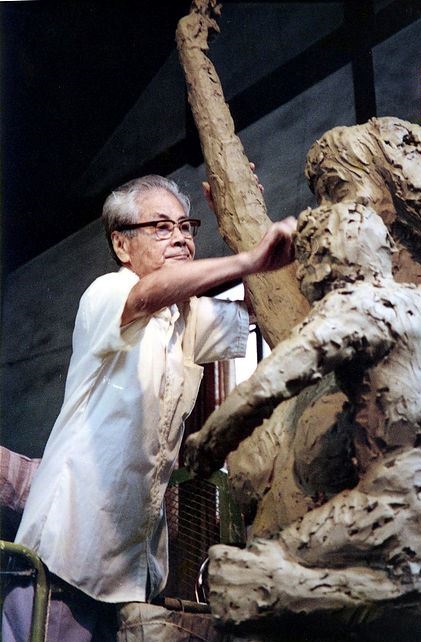 Chinese Name: 蒲添生
Year of Birth: 1912
Place of Birth: Chiayi, Taiwan
Did You Know?
Pu Tian-sheng, known as "Taiwan's number one sculptor," was a pioneer of Western classical sculpture in Taiwan. He gained renown for his figure sculpture work, showing a particular gift for interpreting the texture of his figures in his pieces. His works not only captured a microcosm of modern Taiwanese society but also stand as witness to the diversity of the field, from tradition to postmodernism. Pu once remarked, "I have given my life to sculpture, and it, in turn, has given life to me."

Pu Tiansheng was born in an artistic family in Chiayi. His father, Pu Ying, was a picture framer with a talent for portraiture, while his grandfather was a painter and sculptor of Buddha statues. Growing up in his father’s shop, Pu developed an interest in painting and began to do portraits of customers. In 1919, he enrolled at Tamagawa Public School (now Chongwen Elementary in the East District of Chiayi City). He was taught by mentor Chen Cheng-po, who inspired him with his passion for art. Later, Pu married Chen’s eldest daughter. At the age of 14, he won the first prize in the Hsinchu Art Exhibition for his work "Gamecock." In 1928, he joined Lin Yu-shan and other painters to form the Chun-Meng Painting Society.

In 1931, Pu went to Japan and joined the Kawabata Painting School in Tokyo, specializing in sketching. The following year, he started courses for glue color painting at Japan's Imperial Art School of Japan (now Musashino Art University) before transferring to the sculpture department. In 1934, he left the Imperial Art School and entered the private school of Japanese master sculptor Fumio Asakura. Under Asakura's strict teaching, he laid a deep technical foundation, developed knowledge and enthusiasm in art. In 1940, he fired his first shot into the world of sculpture as his piece "People of the Sea" was selected for the Kōki Anniversary Art Exhibition. After studying sculpture in Japan, he dedicated himself to the sparse Taiwanese art scene of the time and assisted in establishing the sculpture department of the Tai-Yang Art Association. With an introduction from his father-in-law, Pu took on his first job after returning to Taiwan making a statue of Chiang Kai-shek in full military dress and a bronze statue of Sun Yat-sen that now stands in the northeast of Taipei Zhongshan Hall. With this, he became the creator of Taiwan’s first-ever likeness of Sun Yat-sen. In 1945, he served as a juror for the first Taiwan Provincial Art Exhibition - a position which he continued to hold for several decades. In 1947, he brought copper casting technology into Taiwan from Japan and established a copper casting factory. From 1949 to 1979, he lectured at the Provincial Education Building's Sculpting Seminar, having a tremendous impact on the development of Taiwanese sculpture.

The major source of Pu's inspiration comes from the human body, through his works, he aims to interpret and express the beauty of the body and life. In 1947, he created "Poet," modeled on the famous Chinese writer Lu Xun. Having been reported in the wake of the February 28 Incident, Pu hid this work among the flowers of his courtyard until it was uncovered again in 1983 and was selected to participate in the Paris Spring Salon art show. "Poet" could be considered representative of Pu’s early works. In 1958, his natural and realistic female nude entitled "Light of Spring" was selected for the Japanese Fine Art Exhibition. In 1981, his pursuit of ideals of human beauty took form in "The Three Graces," and he was later selected into the Paris Salon art show with "Poet," "Standing Gracefully," and "Cherish." In 1988, after watching the women's gymnastics during the Seoul Olympic Games, Pu was inspired to create his ten-piece "Sports series." In addition, he also created the series "Family," with dozens of figures expressing his deep affection for his family. His "Busts series" primarily consists of figures and statues of leading lights of politics, business, and society, capturing the modern history of Taiwan through art, giving it unique historical significance. In 1993, he was invited by former President Lee Teng-hui to craft a memorial statue to honor the kindergarten teacher, Lin Ching-chuan. He passed away in 1996 after completing this work.

Pu Tian-sheng used sculpture to record many figures from various aspects of Taiwan, including politics, industry, and society. He crafted likenesses of these figures’ faces, bodies, and spirits, enabling the public to see the footprints of Taiwan's development through his works and leaving Taiwan with many important cultural assets. He dedicated more than 50 years of his life to creating sculptures, producing over 200 pieces, making him the sculptor with both the largest number and the greatest artistic value in Taiwan. Pu once said, "when my creation stops, that is when my life concludes," words that he ultimately proved to be true.