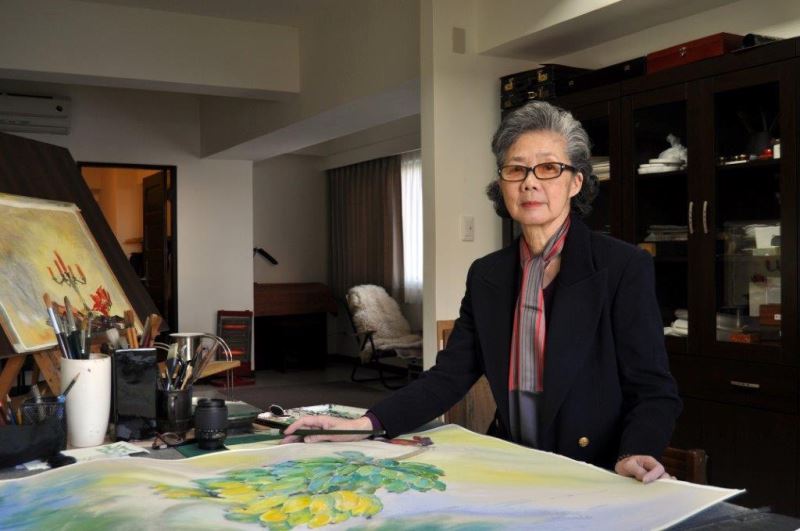 Did You Know?
Liang Dan-feng was a well-known watercolor painter and prose writer who won the 16th National Awards for Art under the Literature and Arts category in 1991. Her paintings focused on images of travel, and she was a pioneer in opening up the world of self-guided travel and realism paintings to Taiwanese women. Beginning in 2012, she donated a large amount of her life's work to the National Library, making her the largest donor in the domestic art and literature sector to date and leaving a precious record of Taiwanese art.

Liang Dan-feng's father, Liang Ding-ming, was the eldest of the "Liang Trio," part of a prestigious family of painters. At the age of 13, Liang Dan-feng picked up a paintbrush for the first time and begged her father to teach her how to paint. He gave her two cabbage leaves and asked her to paint on them by herself, marking her first steps down the path of painting. At that time, life was difficult due to the civil war in China, but Liang made good use of the materials available to her to make her own oil and watercolor painting, teaching herself how to paint. In her early years, she studied at the National Hangzhou Art College (now the China Academy of Art) in Hangzhou, China, where she excelled in both Chinese and Western art, including watercolor, oil painting, and sketching. Later, she moved to Taiwan with the Nationalist government, taking up a teaching position at the Fine Arts Department of the National School of Arts (now the National Taiwan University of Arts) and Chinese Culture University. She also became a full-time associate professor in the Department of Commercial Design at Ming Chuan University, a position she held for over 40 years, nurturing numerous talents.

In 1974, Liang was invited by St. John's University in the US to exhibit her works at the school's Asian Center, extending her artistic journey to the international level. She traveled to more than 80 countries and also exhibited her works at the Armed Forces Cultural Center in Taiwan, creating a sensation and cementing her reputation as a watercolor landscape artist. Liang's early paintings were mostly ink wash, but she chose to use watercolor and pencil later, as they were easier to carry around. As a result, most of her paintings were in these media, and the watercolor paintings became the ones best able to showcase her painterly skills. Although she was also talented in ink wash and oil painting, these works are far lesser than the former.

She described her painting style as inherited from her father's Romantic style, the origins of which can be seen in the style of Eugène Delacroix and the nineteenth-century Romanticists. Her brush strokes are firm, quick and elegantly painted, with her works practically completed on site. Liang Dan-feng once said her father taught her that nature is the best teacher, so her artistic work draws on the realization of life, particularly emphasizing the importance of self-discovery, not only in technique but also in the value of life. She was not one to strictly adhere to old standards and norms when using her painting tools, because she believed that art should break free of the existing frameworks. For example, her ink wash works often made use of white space for an ethereal effect. Similarly, her watercolor paintings resemble the style of oil paintings.

In 2012, Liang started donating paintings and drafts to the National Library, ultimately giving them more than 12,000 paintings and 2,000 drafts, the largest donation in Taiwan's art and literature sector and an immense contribution to art education and art history research in the country. Liang Dan-feng also frequently exhibited watercolor paintings and sketches from her travels around the world. Her works can be found in the collections of the Museum of Asian Art and Museum Rade in Germany, the Museum of Applied Arts in Austria, the Ministry of Tourism and Antiquities in Jordan, the Ministry of Culture and Tourism in Turkey, and St. John's University in the United States.

Over the years, she received a number of prestigious awards, including the 1956 Philippine First Prize in Chinese Painting, the Medal of Honor in Fine Arts from the Taiwanese Cultural Association, the Medal of Arts from the Ministry of Education, the Century Dragon Award, the Golden Duke Award, and, in 1991, the 16th National Awards for Art.

On September 6, 2021, Liang Dan-feng passed away at the age of 86 from illness. She devoted her life to art, drawing a life story in painting and literature through her travel sketches, and donating her paintings to the country for free, playing an essential role in the advancement of art education and art history in Taiwan.