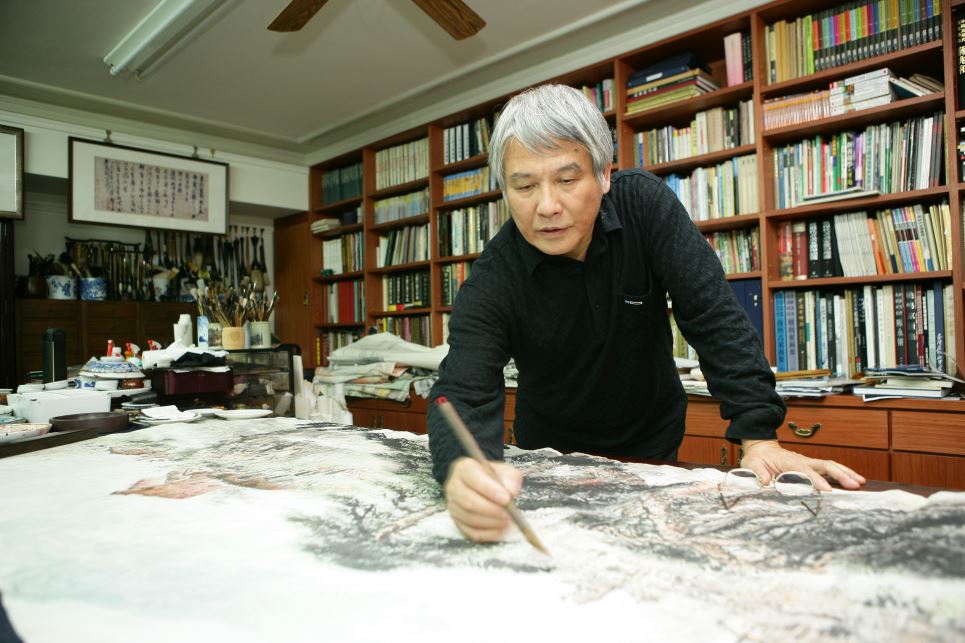 Chinese Name: 江明賢
Year of Birth: 1942
Place of Birth: Taichung, Taiwan
Did You Know?
Inspired by both Eastern aesthetics and Western avant-garde art trends, art educator Chiang Ming-shyan has taken the idea of "learning from the West to enrich the East" and applied it to his art, combining traditional ink wash with Western painting concepts both traditional and modern to create a unique personal style. In 1988, he won the National Award for Arts, and to this day, he remains an important contributor to the art of ink wash painting in Taiwan and is committed to the promotion of cultural and artistic exchanges between China and Taiwan.

Chiang Ming-shyan was born to a family of farmers and loved painting from early childhood. He went on to graduate from the Art Department of National Taiwan Normal University in 1968 before going on to study in Spain, where he obtained a master's degree from the Royal Academy of Fine Arts of San Fernando in Madrid. He studied in New York from 1947 to 1977. Over the years, he has served as a professor, dean, and chair of the Department of Fine Arts and Graduate Institute of Fine Arts at National Taiwan Normal University. In 1988, he won the National Award for Arts, cementing his place as one of Taiwan's most important ink wash artists.

In 1988, Chiang Ming-shyan broke a 40-year deadlock in artistic interactions between the two sides of the Taiwan Strait, accepting an invitation from the Chinese Ministry of Culture's Chinese Cultural Friendship Association to hold solo exhibitions at the National Art Museum of China and the Shanghai Art Museum. This saw him become the first Taiwanese artist to hold a solo exhibition in China in recent times, a milestone that shook the cultural and art scenes on both sides of the Strait.

After retiring from Taiwan Normal University, Chiang devoted himself to ink wash painting and the promotion of cultural and artistic exchanges between China and Taiwan. In 2011, he was employed as a committee member and researcher with the China National Academy of Painting. In 2012, the People's Fine Arts Publishing House in Beijing published "Paintings by Famous Chinese Modern and Modern Artists—Chiang Ming-shyan (中國近現代名家畫集─江明賢)," the first publication in the "Da Hong Bao" collection of works to feature an accomplished Taiwanese-born artist.” This reflected the esteem in which he is held in the Chinese art world. In 2014, he applied to be a jury member and sole representative of Taiwan in China’s 12th National Exhibition of Hong Kong, Macau, Taiwan, and Overseas Art Works. In 2015, the National Museum of China and Zhejiang Art Museum held an academic seminar on Chiang’s works.

Inspired by Eastern aesthetics and avant-garde Western art, Chiang Ming-shyan’s art presents a diverse face by incorporating these with traditional ink wash techniques. He is driven by the belief that the simpler the theme, the more depth it requires to paint. When recording buildings and other scenic spots, he often invests personal emotions, aesthetic perceptions, and life ideals in his work, as he strives to go beyond the traditional forms and limitations of ink wash to create a broader, more international form of the art.

Chiang Ming-shyan prides himself on not being constrained by tradition, but rather moving forward with the times. A pioneer in applying the idea of "learning from the West to enrich the East" to art, he has combined the atmosphere, poetic sensibility, and techniques of traditional Chinese ink wash with the composition, color, perspective, and techniques of Western painting to create a unique personal style. The objects he depicts with his rich brushwork are not just simple mountains, rivers, and trees, but, through his intuitive aesthetic perception, sublime symbolic images full of personal creative energy.

Between 1972 and 2015, he held more than 60 solo exhibitions in countries and territories like Taiwan, Spain, France, the United States, Japan, Hong Kong, Macau, and China. His works combine modern Chinese and Western aesthetic spirits and techniques, with both form and rhythm coming together to create a unique creative style. His recent work has focused on cultural and historical concerns. Working from his concept of "recording cultural assets," Chiang sketches natural scenery all over Taiwan, including mountains like Alishan and Yushan; cultural features like the wind lions of Kinmen, swallow-tail houses, and Keelung Port; and locations like Dajia's Jenn Lann Temple, Beigang’s Chaotian Temple, and temple fairs. Through these, he strives to tell the world about the beauty of Taiwan's nature and culture, as well as the value of intangible cultural heritage such as Taiwan’s distinctive folk celebrations. In addition, his works have also included the UNESCO World Heritage Sites like the Great Wall, Wuzhen Water Town, the Longmen Grottoes, the Historic Center of Prague, the Historic Center of Rome, and the Maltese City of Valletta.