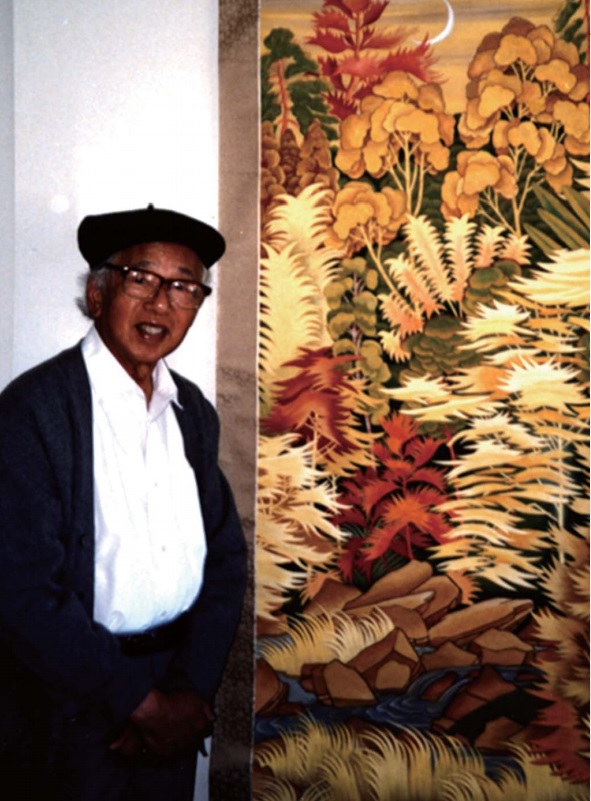 As a pioneering gouache painter in Taiwan, Kuo Hsueh-hu (郭雪湖) was one of the three young artists who were selected by the 1st Taiwan Fine Arts Exhibition in 1927 under Japanese colonial rule. The other two were prominent painters Chen Chin (陳進) and Lin Yu-shan (林玉山). He has since created a style of painting that left a major impact on Taiwan's development of modern fine arts. In 2008, Kuo received the 27th National Cultural Award at the age of 99.

Born in Taipei, Kuo grew up in the beautiful surroundings of Dadaocheng, a historical region of Taipei that was an important trading port during the Japanese colonial era. When Kuo was 9 years old, he started developing his painting skills after his artistic talent was discovered in school. When he turned 16, his mother introduced him to the renowned professional painter Tsai Hsueh-hsi (蔡雪溪). He became Tsai's pupil and was given the name "Hsueh-hu,” sharing the second character for "snow.”

Under Tsai's instructions, Kuo learned art theories as well as painting and framing skills. As a student, Kuo spent the days painting, and studied in the evenings by reviewing art history, colors, and materials as well as copying classic paintings for practice. Kuo also went outdoors frequently to paint as nature was his main source of inspiration.

Influenced by Japanese aesthetics, Kuo specialized in gouache paintings. Most of his early works were inspired by his childhood memories in the Dadaocheng region. "Scenery Near Yuan Shan (圓山附近)” completed in 1928 was his breakthrough piece featuring an idyllic depiction of a familiar landscape. The vivid use of the color green and the exquisite techniques he employed made it a representative work of the Hsueh-hu school of painting.

In his prime, Kuo traveled to Japan, China, Southeast Asia, the United States, and Europe, where he broadened his horizons. Kuo thus reinvented his painting style by using an outlining technique, blending in the rich colors to create a mixed style of presentation that is simple yet poetic.

During his lifelong dedication to art, Kuo also established the Hsueh-hu Painting Studio (雪湖美術教室), the first government-sanctioned studio in Taiwan devoted to cultivating children in painting. Kuopassed away in 2012, but his colorful legacy stands testament to his centennial love of art.