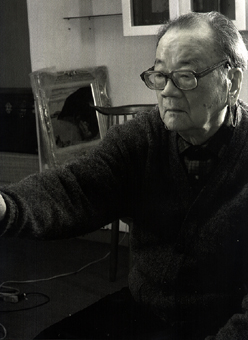 Artist Xie Lifa (謝里法) once praised: "In Taiwan's art movement, Li Shih-chiao served as a bridge to interpret the elements of Western masterpieces, making it approachable for the artists of new generation.” The significant painter played a leading role in the development of Western-style paintings in Taiwan.

Li attended the Taipei Normal School, the predecessor of the National Taiwan Normal University, to study fine arts in 1923. He was the pupil of Kinichiro Ishikawa (石川欽一郎), a Japanese artist who helped introduce Western arts to Taiwan. In 1931, Li pursued further art studies at the Tokyo University of the Arts and stayed in Japan until 1944.

From the colonial period to the retrocession of Taiwan, Li reflected upon the changing of society through his paintings. He once noted that "a painting is a mirror of a society, it is meaningful only when it relates to everyday life.” Thus, his paintings have a sense of realism which depicts the scenery and people of his time.

His notable work "Taipei Bridge (台北橋)” illustrates a picture of the harbor and boats along the Tamsui River, presenting the prosperous scene from the 1890s to1920s. After the end of SecondSino-Japanese War in 1945, Li also captured the new phenomena of girls wearing Chinese qipao and riding bicyclesin the painting "Market (市場口).”

Later in his 1949work "Harvest (田家樂),”Li depicted a scene of harvest season in which farmers are having a break after gathering crops. As much as harvesting is delightful, the facial expression of the farmers however, reveals an air of melancholy. The juxtaposition implies Li's concern over inflation and the heavy burden of farmersduring the post-war period in Taiwan.

Among painters of his time, Li was the one who always sought innovation in painting. He was dubbed the "long-distance runner of art” for his persistence in painting. Li's aesthetics and criticism formed a unique style of his kind. The heritage he left serves to educate as well as to inspire future generations.