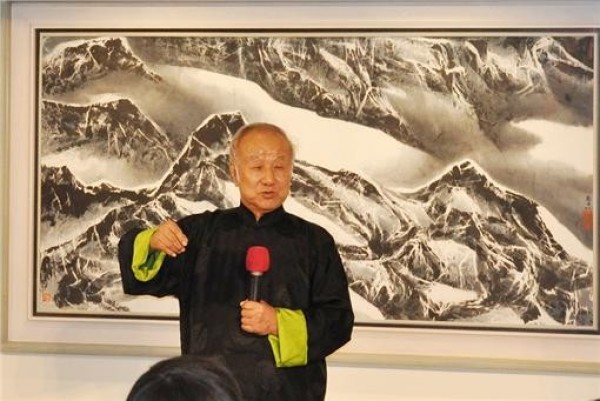 Dubbed the "Father of Modern Ink Painting,” Liu Kuo-sung is a pioneering artist who created a new school of modern Chinese ink painting by incorporating western techniques with traditional Chinese calligraphy and aesthetics. As one of the most important advocates of contemporary ink art, LiuwashonoredwithTaiwan's National Cultural Award in 2017.

After a quiet childhood in China, Liu resettled to Taiwan with the Nationalist government in 1949. He soon spearheaded a modern painting movement by establishing the Fifth Moon Group (五月畫會) in 1956 after receivinganart degree fromNational Taiwan Normal University.

With the philosophy"imitation of the new cannot substitute for the old,” Liu subverted the traditional form of ink art by innovatively integrating western abstract concepts witheastern aesthetics, creating bold and expressive calligraphic works that reflect the international trends of the time while remaining true to the format and motifs of Chinese painting.

Liu also challenges conventional Chinese painting philosophy, which focuses on how to achieve an ideal composition, by experimenting withdifferent possibilities of ink painting. This led to the invention of the "Liu Kuo Sung Paper” and a fiber-peeling technique that created works revealing white lineswithin the ink stroke.

In the 1970s, Liu introducedcontemporary ink art to Hong Kong and fostered a number of modernist Chinese artists. In 1983, his first solo exhibition in Beijing stunned the Chinese art scene with his groundbreaking aesthetics and unique style.

Since then, Liu's works have been showcased extensively across the world. Hehasalsobecomeone ofthe top Asian artists whose works are collected by over 60 museums and galleries, including those based in the U.S., China, Italy, Switzerland, Australia, and Germany.

Over the past decades, Liu has gradually moved towardabstract art by learning new techniques and collage styles, andintegrating new materials such as acrylic and spray paints.

In 2016, Liu became the first Chinese painter to be named a foreign honorary member by the American Academy of Arts and Sciences, the oldest and most prestigious honorary society in the U.S., in recognition of his influential role in global arts development.