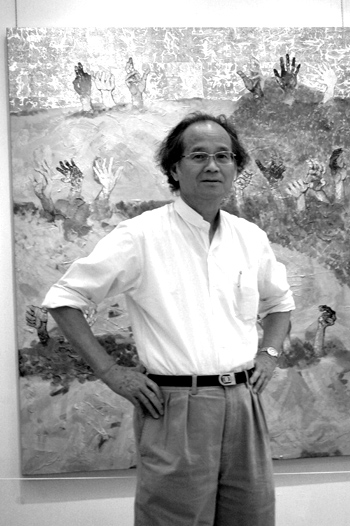 Liao Shiou-ping is a celebrated Taiwan-born artist who is credited with introducing modern woodblock printing to Taiwan. Moreover, his prints have survived more than four decades of aesthetic turmoil and shifts in taste, remaining as elegant and relevant in the most timeless and classic sense.

Liao was born in Taipei in 1936; at an early age, he observed his father and elder brother, both architects, making blueprint sketches. Growing up in the Longshan Temple (龍山寺) neighborhood, Liao also became fascinated with the ornate drawings and patterns of the temple. These were the two influences that set him on his career path.

Liao's trip to Japan in 1962 to study painting became the turning point in his life as he started to explore a new artistic realm: woodblock printing. He then traveled to France to study at the Fine Arts Institute of Paris in 1965, and was invited to hold an exhibition at the Miami Museum of Contemporary Art in 1969.

He remained in New York until 1973, at which time he was fully prepared to introduce modern woodblock-printing technology and aesthetics into Taiwan's art scene as a professor, author, and mentor.

Liao's commitment to developing his art from the local aesthetic point of view has garnered widespread recognition in the international community, and his endeavors have helped to propel Taiwanese-style woodblock works to international fame on a par with the best woodblock prints in the world.

Simple, unadorned subject matter drawn from everyday life in Taiwan are used extensively in his work. He also attempts to interpret the relationship between man and nature using Western aesthetics and the concept of Yin-Yang, vividly portraying his personal reflections as well as a charming tranquility and stillness. Liao's signature collection, 'The Symbols of Doors,' is replete with thoughtful metaphors of human existence.

As someone with extensive overseas experience in Japan, France, and the United States, Liao is in favor of the idea that artists spend some time overseas to broaden their horizons and get acquainted with new cultures. He also maintains that artists should be open-minded, able to assimilate, observe, and compare in order to achieve artistic breakthroughs.

Liao has found simple inspirations from diverse sources to incorporate into his artwork: the kettle he used during his life in Japan, ordinary vegetables, wide, spacious sidewalks, and crisscrossing streets. He argues that painting is all about portraying things that are connected to life and memories. That is why he always draws from Taiwan's sights and sounds, daily life experiences and folk customs as his themes and creates new styles for his pieces. He often introduces the symmetrical, soothing compositions and colors commonly found in Taiwan's temples into his works.

Despite the impressions of different countries and aesthetic philosophies that have colored Liao's experience, he still succeeds in tying Asian elements into his creative works. For example, Qi Ye and Ba Ye (七爺八爺, literally, the 7th Lord and 8th Lord, who bring the souls of the dead before the judge of the underworld, according to Chinese folk religion), temple festivals, temple entrances and walls, folk customs and religions make regular appearances in his work.

This fashion of artistic perceptions has put Liao in a class of his own, and he has won critical acclaim internationally with a remarkable collection of woodblock prints enlivened with the essence of Taiwanese flavors.