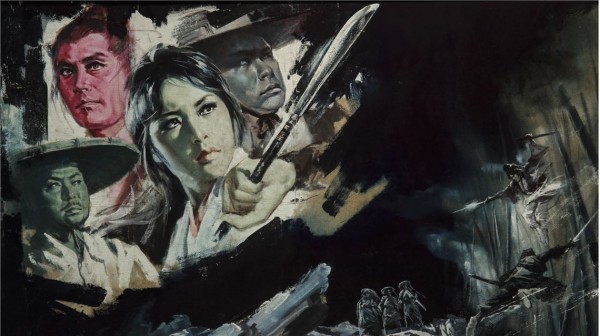 Chen Tzu-fu, a master of the dying art of hand-drawn illustrations for cinema, has drawn more than 5,000 film posters that reflect the history of Taiwan cinema. Chen's works successfully promoted films and preserved the evolving aesthetics of a modernizing Taiwan. The significance of his work was recognized with the Lifetime Achievement Award at the 43rd Golden Horse Awards.

Chen began to manifest a talent for painting - especially human figures - when he was studying in high school. After finishing academic studies, Chen joined the army and served in the Marines Corps during World War II.

After the war ended, Chen was offered the rank of lieutenant by the Republic of China Navy; however, he was interested in painting and chose to work for an art studio instead. By chance, he was introduced to movie producer Cathay Organization (HK) Ltd (國泰電影公司), where he started repairing or repainting film posters.

Chen's reputation for quality quickly attracted other film companies to entrust him with more poster repairs. By 1944, Chen had his first opportunity to paint an original piece for "Bloodshed on an Oriental Cherry (血濺櫻花),” which did not come with a poster when the company imported the film.

The commercial success of the war film "Bloodshed on an Oriental Cherry” helped Chen build a strong reputation as a film poster artist in the 1950s. Commissioned work began to pour in and Chen became a full-time poster artist.

As a self-taught artist, Chen actively explored different art styles while designing and painting for a steady stream of films. He produced posters for Taiwanese-language films, melodramas, Huangmei opera films, wuxia films, and even Hollywood films. Thus, his posters have truly witnessed the development of Taiwan cinema.

Chen uses different symbolism and aesthetics for different film genres while staying true to the spirit of the film and the appearance of the actors and actresses. He personally considers his most representative work to be the poster he drew for the 1978 wuxia film "Big Land Flying Eagles (大地飛鷹),” in which he had established a personal style with an exquisite painting technique.

Following the rise of the digital age, hand-drawn posters were replaced by computer imagery and Chen retired in 1994 after creating his last poster for "The House of the Spirits (金色豪門),” a 1993 German-Danish-Portuguese period drama film.

Though the works Chen created were mostly to present the storyline of each film, the posters are now recognized as important cultural assets that record the different and diverse lifestyles, cultures, and social trends throughout the past five decades in Taiwan.