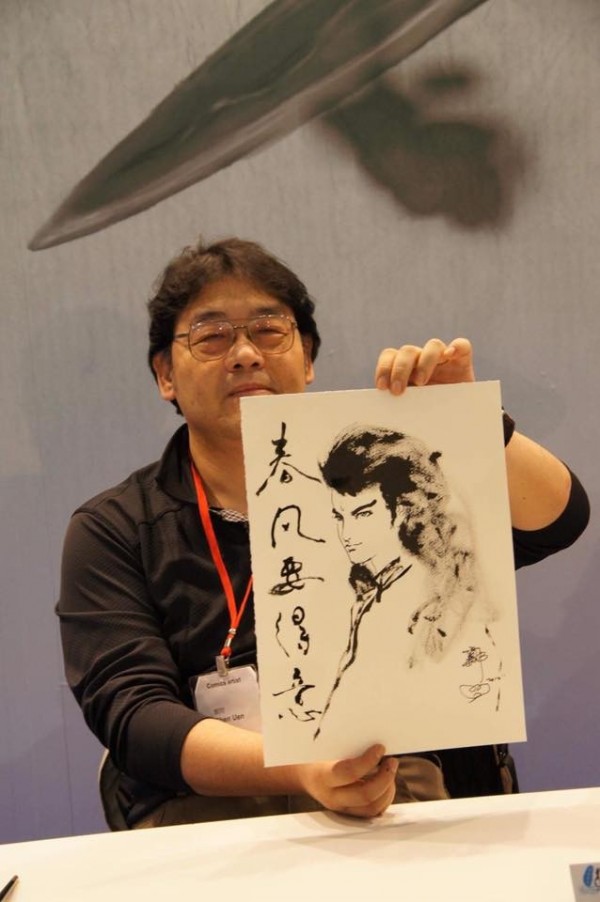 Dubbed "The Treasure of Asia” by Japanese manga commentators, Chen Uen (鄭問) was a prominent cartoon artist who established a new style of aesthetics in the wuxia genre. His comic series based on Chinese historical fiction created a sensation in Japan, making him the first cartoonist from Taiwan to win the Japanese Cartoonists Association Award.

Chen used to work as an interior designer after graduating from Fu-Hsin Arts and Trade School. He began his career as a cartoonist after publishing a comic series titled "Panther the Warrior (戰士黑豹)” on China Times Weekly in 1984.

Following the positive feedback for "Panther the Warrior,” Chen released "Warrior God (鬥神)” and "Ranked Biographies (刺客列傳),” the latter of which was adapted from classic Chinese text "Records of the Grand Historian (史記).”

In 1989, Chen collaborated with author Ma Li (馬利), releasing a new series titled "Abi-Sword (阿鼻劍)” on Sunday Comics weekly. The unique Chinese ink painting style drew the attention of Kodansha Ltd., then the largest Japanese publishing company based in Tokyo, prompting the release of "Heroes of the East Chou Dynasty (東周英雄傳)” one year later in Japan.

The intricately drawn characters, scenes, and backgrounds, as well as the use of calligraphic brush strokes and vibrant colors in "Heroes of the East Chou Dynasty” stunned Japanese readers. It was described by The Asahi Shimbun as an outstanding work, and the author was praised as a rare genius.

Chen made another breakthrough with the series "Magical Super Asia (深邃美麗的亞細亞).” Unlike previous historical stories, this urban fantasy showed not only Chen's mature ink painting techniques but his personal evolution in terms of narration, characters, and storytelling over the years. It established Chen as a cartoon artist with a highly recognizable set of style and aesthetics.

As a low-key artist throughout his life, Chen had brought Chinese legendary stories into graphic life, helping promote Chinese culture as well as Taiwan's original comics in Japan at the same time. He died of a heart attack at the age of 58, leaving behind a rich legacy of unique comics, painting collections, and a talented generation of new cartoonists.

He was awarded a posthumous presidential citation on April 25, 2017.