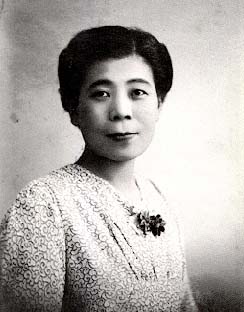 Chen Chin was the first Taiwanese female painter to achieve national fame and recognition. For her contributions to glue-on-silk paintings, her honest depictions of Taiwanese women's gradual evolvement throughout a span of seventy-plus years, and her role in fostering a new generation of women artists, Chen was awarded the 16th National Cultural Award in 1996. She passed away two years later, at the age of 92.

Born in Hsinchu's Xiangshan District during the Japanese colonization era, Chen was raised and educated by an affluent and scholarly family. Her father was a wealthy businessman and a patron of the arts who equivocally supported his daughter's artistic journey, including her overseas studies at the Tokyo Women's Art School. When the social convention for 19-year-old girls was to marry and bear kids, both Chen senior and junior came under considerable scrutiny for their choices.

Despite having trained under Japan's finest painting instructors, Chen's style matured as a hybrid of Chinese, Japanese, and Taiwanese influences, which in turn allowed her to accurately capture and portray her reality during the Japanese colonial era of Taiwan. In the 1935 painting "Leisure (悠閒),” Chen included clashing details such as a Chinese-style canopy bed alongside a Japanese-crafted incense burner. More jarringly to the public's eye was the painting's depiction of an elegant woman perching with a book - a scene that was not accounted by either culture.

By studying Chen's numerous paintings in chronological order, one can trace two separate histories at once - that of Taiwan's and that of Chen's personal growth. From demure women with their eyes downcast to high-spirited individuals coasting on bicycles, women's expanding role in Taiwanese society can be witnessed in Chen's scrolls of silk. Her choice of subjects over the years also varied to reflect her roles as an independent artist, a loving wife, and a dotting mother.

After her death in 1998, she was commemorated for defying conventional female stereotypes - especially those associated with women artists - and her lifelong dedication to the arts. The Chen Chin Arts & Culture Award (陳進藝術文化獎), funded posthumously by her NT$1 million donation in 1997, still provides annual scholarships to promising new artists in her favorite field of glue painting.