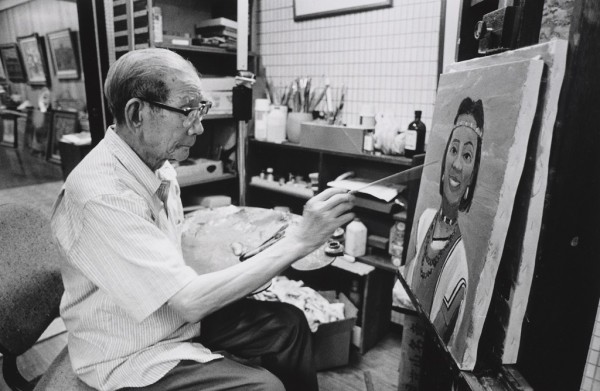 As one of Taiwan's first-generation modern painters, Yen Shui-long was a versatile artist who was influenced by Japanese and French aesthetics. In addition to creating a wide range of artworks throughout his career, Yen served as a pioneering advocate for making the arts a part of everyday life, launching craft workshops and promoting cultural education across the nation.

Born in the Japanese colonial era in Taiwan, Yen went to Japan in 1920 to study fine arts at Tokyo University of the Arts. He was the mentored by French painters Jean Marchend, Fernand Lger, and Van Dongen when prominent arts patron Lin Hsien-tang (林獻堂) funded his studies in France in 1929.

Yen became the first Taiwanese artist to work as an advertising designer when he joined the Osaka-based Smoca Dentifrice Co., Ltd. in 1933. During his stay in Japan, he was also invited by Japanese authorities to promote arts and crafts in Taiwan, which led to the establishment of the South Asia Crafts Society (南亞工藝社) in Tainan in 1940.

After returning to Taiwan in 1944, Yen started serving as a fine arts instructor at local universities. He also dedicated considerable time to promoting arts and crafts through the Tai-Yang Arts Society (台陽美術協會) and Taiwan Plastic Arts Society (台灣造型美術協會), which were co-founded by him and other notable Taiwanese artists of that era.

Yen's most celebrated paintings were those inspired by Taiwan's aboriginal culture, such as portraits of indigenous peoples from different tribes and scenic paintings of Orchid Island, where the Tao (Yami) people dwell. These unadorned paintings of simple scenes reflect his observations on the cultural, environmental, and humanistic elements of Taiwan.

Since 1961, Yen had helped improve urban landscapes in Taiwan by creating a series of large mosaics, including the first public art installation in Taiwan - "From Agricultural Society to Industrial Society (從農業社會到工業社會)” - on the wall of Taipei's Jiantan Park. Another famous piece from the series, "Exercise (運動),” adorns the wall of the National Taiwan University of Physical Education and Sport in Taichung.

To commemorate Yen's dedication to the development of Taiwanese crafts and the quality improvement of daily life through the arts, the Yanshiulong Memorial Park and a statue of Yen was established by the Tainan City government for the public to remember Yen's life and his legacy.