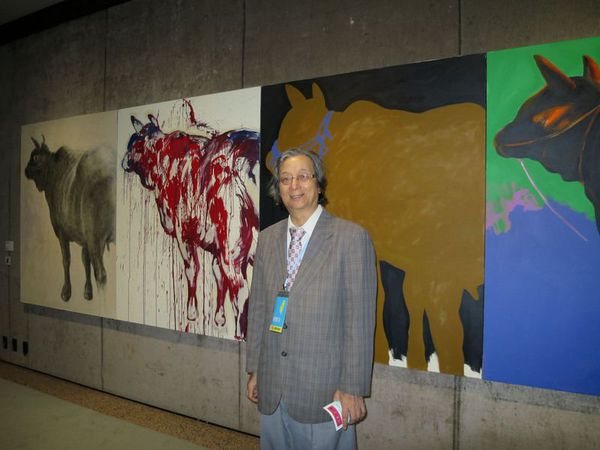 Hsieh Li-fa is a notable printmaker and art critic dedicated to studying and promoting Taiwan's fine arts. He is also the first person to write the history of art in Taiwan. His literary works, which helped rediscover achievements and contributions by local artists, have left an important impact on Taiwan's reconstruction of its art history.

Hsieh had his earliest experience with art when he was reading a children's magazine in which a photo of the relief "Water Buffalo (水牛群像)" by Taiwanese sculptor Huang Tu-shui (黃土水) was featured. Learning that the work was preserved at the Taipei Zhongshan Hall, he went to see the artwork that left him with an unforgettable experience in childhood.

Later he studied fine arts at the National Taiwan Normal University, where he joined the Fifth Moon Group painting society founded by Liu Kuo-sung. Hsieh went on to pursue further studies in sculpture and art history in Paris and New York to learn about western art history.

After living overseas for more than a decade, Hsieh started to contemplate the art of Taiwan, which he had neglected while focusing on the west. He thus re-explored the history and culture of Taiwan, and decided to introduce the then little-known Taiwanese artists and their works to the public.

Upon returning to Taiwan, Hsieh started engaging in writing about Taiwanese art history while continuing to create art. In 1978, he published the "History of Taiwan Art Movement in the Japanese Colonial Era (日據時代台灣美術運動史)," which is written from the historical perspective of that era. Instead of separating art history from social development, the book filled up the gaps of art development in Taiwan and established an historic art narrative rooted in that era.

Hsieh later explored and reintroduced eight artists and writers such as Chen Cheng-po (陳澄波) who had been overlooked by history in his book "Taiwan-born Artists (台灣出土人物誌)," shedding light on the arts and literary scene in Taiwan and drawing public attention to some of the most significant cultural figures in local history.

In addition to reconstructing art history, Chen also introduced western art theories to Taiwan through his literary work. In 2013, he was awarded the Lifetime Achievement by the International Association of Art Critics. In 2018, he also received the National Cultural Award for his contribution to the development of art history in Taiwan.