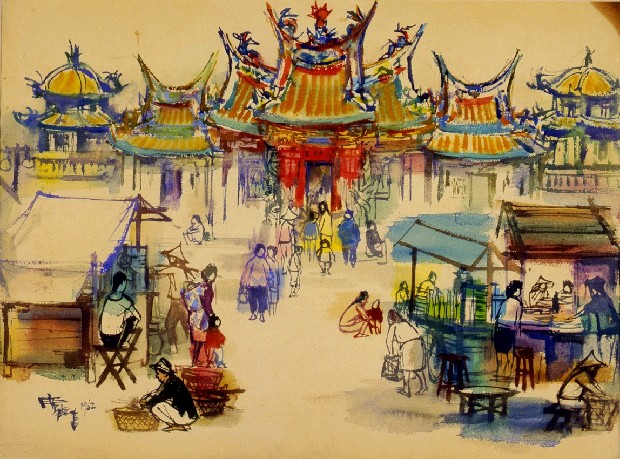 Shiy De-jinn was born in Sichuan in 1923. After completing his art education at Hangzhou National College of Art, he came to Taiwan in 1948, experiencing the true beauty of the island through the customs and lives of her people, which would become a wellspring of creative inspiration for him.

Shiy was accomplished in a wide variety of fields of artistic creation, and dedicated his life to finding ways to give modern expression to Chinese art and emotion — to bringing Chinese touches to Western styles, to adding modern elements to traditional art, and to pursuing the question of how to update the spirit of Chinese art for modernity. In particular, he was concerned with applying the blending style of Chinese ink wash to watercolor painting, a method he used to create his most iconic images.

The year after holding a joint exhibition with renowned fellow artist Liao Chi-chun (廖繼春), Shiy was invited by the US State Department to visit the United States with Liao, which would mark the beginning of a three-year journey to the West. The paintings he produced after his return to Taiwan show the impact of the contemporary art style he absorbed during his time in the US and Europe.

Watercolor and ink wash were the two media Shiy particularly loved, and his application of the blacks and lines of the latter brought a richness to his watercolors. From 1969, he began to explore calligraphy, which made his linework all the more skillful. From the 1970s on, he began to take Chinese watercolor painting to a whole new level with a focus on feelings and ideas, contributing much to those who would come after.

In early 2019, a grand retrospective of Shiy's works titled "In Praise of Nativism — Shiy De-Jinn’s Paintings and Taiwan" was held in the Hsinchu, Changhua, Tainan, and Taitung. The exhibition featured 211 of his works, showcasing topics he paid particular attention to and often depicted, such as temples, historic sites, homes, people, landscapes, and flowers. The pieces were a retrospective on Shiy's times, as well as a valuable piece of Taiwan's cultural heritage.

This exhibition combined the preservation of cultural heritage, the historical value of local knowledge, the concept of an art history built around cultural context, and the national policy of rebuilding Taiwan's art history. It was also a valuable demonstration of just how much Shiy contributed to Taiwan and how important his pieces remain to the nation today.