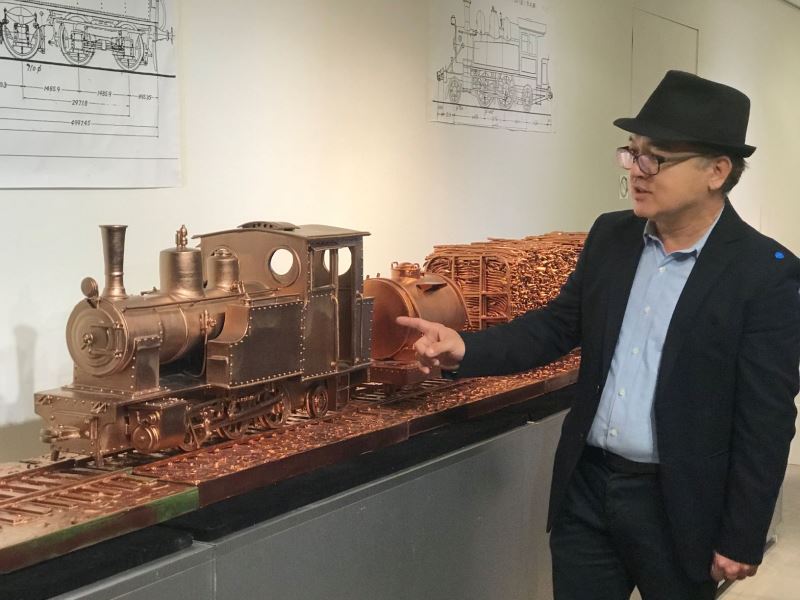 One of the hallmarks that distinguishes ceramic artists is their glazing techniques. Taiwanese ceramic train maker Hsieh Chia-heng (謝嘉亨) once received over two hundred luster glaze recipes from an esteemed professor during his overseas studies in Spain, but experimented over a year without success until his friend suggested adding tin to the kiln fires, which became the main key to his first success.

As his skills and art gained recognition, fame and collectors followed. Hsieh was able to collect old photos of trains, and with his imagination and exact composition, began making ceramic models of older, decommissioned Taiwan Railway Administration locomotives. In order to fire his larger creations, he imported a gas kiln specially from Spain to create the perfect luster glaze.

Mixing copper and silver oxides, Hsieh continued to develop more glaze recipes. He would apply the glaze with a spray gun to "dot" the clay, then during the firing process, these dots of glaze would melt and flow and form new colors and patterns. After repeated firings, the colors became layered, varied, and captivating. Using this technique, Hsieh’s work "River of Time (時光之河)" won third prize at the 2003 National Craft Awards.

Over half a year of experimenting, Hsieh successfully added bismuth oxides to his glaze recipe. Metal compounds have different rates of reduction, or the rate at which oxides react to the level of oxygen inside the kiln, therefore it requires repeated attempts and finesse to bring out all the colors of each metal compound. In 2004, Hsieh's work "Forgiveness (寬容)" using this technique won second prize at the 4th National Crafts Awards.

As a member representing Taiwan at the International Academy of Ceramics (IAC), Hsieh has continued creating ceramic trains, completing 50 such models of locomotives that once circulated in Taiwan. The accurate proportions, steely hues, and realistic textures of his works have won him much praise, but even more valuable is how his artworks provoke reminiscence, recapturing childhood memories of steam whistles and family life. He explores the maximum possibilities of creation across ceramics and metal to tell stories with pottery.