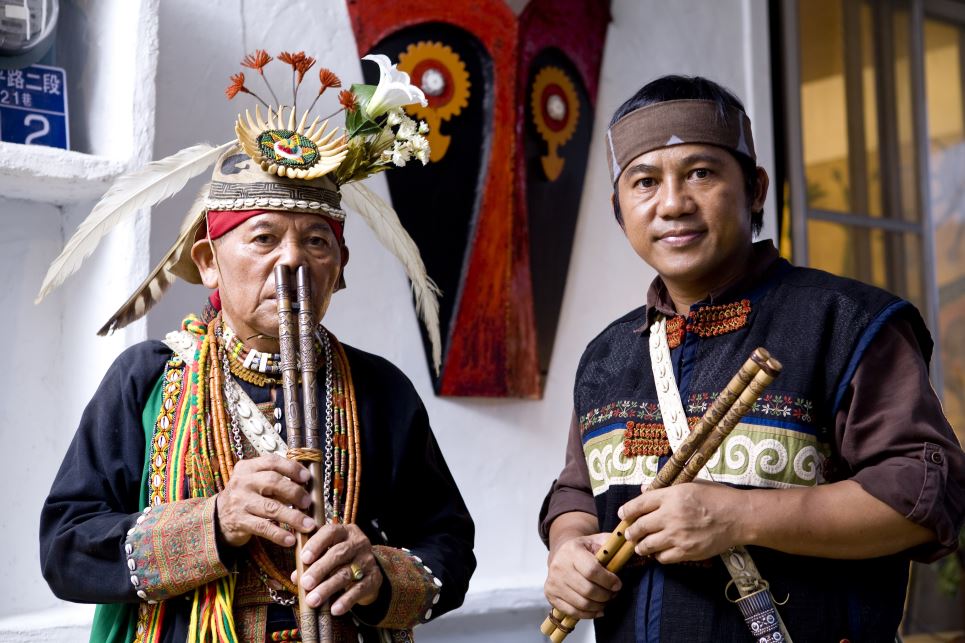 The musical heritage of the Paiwan people

The Paiwan people are renowned not only for their skilled use of art to communicate lifestyle and social structures, but also for their music and dance. As far back as Qing-era historical records, the Paiwan have been recognized for the diversity of their wind instruments, which occupy a unique space among Taiwan’s indigenous peoples. Records tell of men playing nose flutes in courtship, describing the sound of the instrument as "of high pitch and clear voice."

The twin-piped flutes of the Paiwan come in two main categories: nose flutes and mouth flutes. Both are made from wind-dried bamboo (called ljumailjumai in Paiwan), although the nose flutes tend to be slightly thicker than their mouth-played counterparts. The biggest difference between the two is in their mouthpieces.

Nose flutes have embouchures between 0.5 and 0.6 cm in diameter drilled into the top, which is composed of a bamboo node, while at the bottom is a hole between 1.7 and 1.9 cm in diameter that can be opened and closed.

Mouth flutes, meanwhile, have a plug at the embouchure made of dried wood and about 1.9 cm in length and width; there are no particular requirements for the type of wood, but the harder, the better, and once shaped into an 8-cm-long plug, the whole mouthpiece is inserted into the body of the flute. The bottom of the mouth flutes is the same as that of nose flutes.

As for decoration on the flutes, according to elders, "because of the class system, only chiefs could decorate their flutes; no one else had the privilege." The carving art of the Paiwan is also said to be a product of their aristocratic class system. However, modern Paiwan society no longer observes the privileges of the nobility, and the traditional class system is gradually falling away. To carry this art form forward, members of the tribe will carve patterns into daily objects to help keep the traditional spirit alive.

When one is playing a nose flute, their mouth should be closed except when inhaling. To prolong airflow, the initial sound should be accompanied by a humming vibration. It is also essential to smoothly hold notes while playing. According to elders, "when playing the nose flute, you should need to breathe no more than three times per song. The longer you can blow, the more you will be able to express your feelings."

Both nose flutes and mouth flutes can be used to accompany wedding festivities, in courtship, or simply as a way for a man to entertain himself and contemplate life. The nose flute, though, has one other special function — when a member of the village passes away, the chief of the community will often play the twin-piped nose flute in ljemavelja, an act of comforting the bereaved.

The sound of the flute is used to represent the sound of crying, a show of sympathy in sorrow that serves to comfort the family left behind. Tribal elders also consider the sound of these flutes much more beautiful than that of transverse flutes ― deeper and more resonant, but also able to produce light, playful sounds.

Today, this art form is preserved by Paiwan nose-flute player Pairang Pavavaljung. His combination of performing talent and handicraft skills have earned Pavavaljung the nickname Pulima, literally "the many-handed" and meaning "one skilled in craftsmanship and whose hands can tell stories."