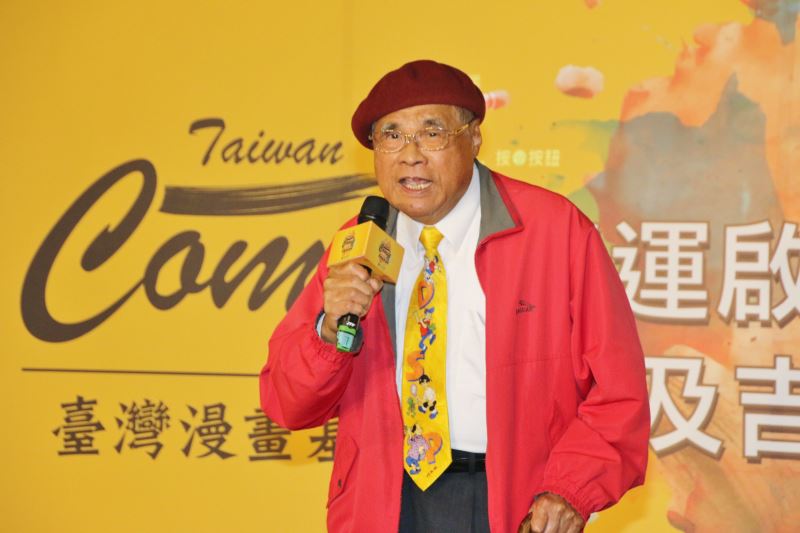 Born in 1934, Hsinchu native Liu Hsing-chin (劉興欽) rose to fame because of his commercially successful "Brother A-san and Great Auntie (阿三哥與大嬸婆)," a comic series that accurately captured everyday life in Taiwan's earlier years, especially during the start of the island's first economic boom.

Liu, who is of Hakka heritage, is known for his uncannily sharp observation skills. Not only are his provocative insights reflected in his drawings, his ability to quickly improvise has resulted in several award-winning inventions.

A native of Dashanbei in Hengshan Township, Liu was born and raised in the Neiwan region. His popular cartoon figures — Brother A-san, Smarty, Robot, and Ah Chin — are all imbued with the wisdom and lifestyle of his hometown. Liu based Grand Auntie on his own mother.

The local government hopes to turn Neiwan into Taiwan's incubation center for cartoonists, and Jiuzantou Station plans to adopt a cartoon monster theme. Because of Grand Auntie, the nine train stations of the Neiwan Line have secured new opportunities through comics and animation.

Liu has now been in the industry for over 70 years, including the 1950s when comics were subject to government censorship. He stated that the government's recent focus on cultural content, and particularly comics, has finally made him proud to call himself a comic creator. This new focus will encourage comic artists to make greater use of local themes and elements, he said, and help usher in a new age of comics with true Taiwanese flair.

More information on the 85-year-old artist is available here.