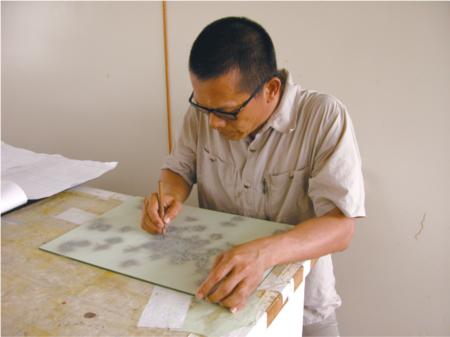 Wu Tsung-hsien, a Kaohsiung-based artist, has crafted artistic glass wares for nearly 40 years. He gained prominence after outperforming many other industry peers in competitions such as the Taiwan Crafts Design Competition and the Hsinchu City Golden Glass Award.

In 2010, his superb artistry led his workshop "Dan Ching Art Glass (丹青玻璃藝術工坊)" to be certified as a "Taiwan Crafts Workshop" by the National Taiwan Craft Research and Development Institute, which set up the certification system to help excellent Taiwanese studios join the nation's growing artisanal tourism industry.

Wu began his career with interior design in 1981, after he finished his mandatory military service. In the following year, upon the invitation of his friends, he switched to the production of paint-stained glass.

Shortly, they turned out quality products that were well-received on the market, thanks to many reasons. First and foremost, Wu applied his knowledge of industrial design — his college major — to the production method. Next, he was a very hands-on manager, handling every aspect of the process from design compositing to modeling, painting, and kiln-firing.

Also, he dedicated much of his time to studying the nature of various glass wares, including kiln-fired glass, paint-stained glass, engraved glass, mosaic-stained glass, and colored glaze.

In 1983, he opened his own workshop Dan Ching in Kaohsiung. In the very beginning, the workshop mostly produced paint-stained glass and mosaic-stained glass, which were all "flat" products. In recent years, Wu has branched out into creating three-dimensional colored-glaze wares.

Wu produces an assortment of glass wares, including ashtrays, doorplates, murals, and products that measure 212 centimeters squared. While becoming even more pleasing in design, these works also serve practical purposes to meet contemporary market demand. Based on this principle, the workshop now offers its costly colored-glaze products at a more affordable price to members of the general public who are seeking a glass piece as a practical item or as an ornament.

Wu noted that designing a glass ware must start with fully understanding the nature of this material. Otherwise, ignorance of the terribly low plasticity and high expansibility of burning glass will bring ruin on a work fired in kiln. However, glass is quite excellent in terms of durability and stability, making it suitable for long-term preservation.

"If you install a piece of colored-glaze ware and a wooden item at home at the same time, the woodwork will certainly become rotten after 50 years, but the colored-glaze piece will surely remain intact after being used by three generations of your family," he said confidently.

Wu's perspective about the future development of glass arts is that methods of promotion and perpetuation are most critical. So, he has begun offering instructions on glass arts in Kaohsiung-based communities and schools with the hope that his choice of crafts will one day become part of the daily life in Taiwan.