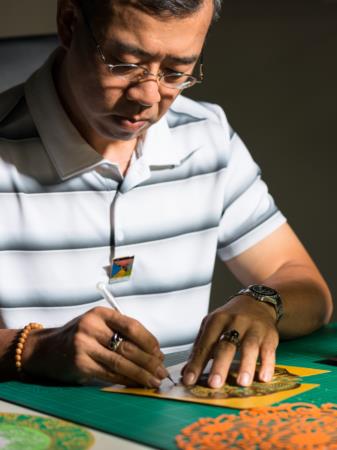 Chen I-jang is a self-taught artist who transforms ordinary sheets of paper into lively works of art. He incorporates papers of different textures and cutting skills with techniques of gold foil paper-cutting, curling, sculpting, and pasting to create 3D paper artworks. His creativity and skills have earned him one silver and nine bronze medals at international craft competitions.

Chen showed a flair for and interest in paper-cutting art from an early age. He had won several prizes at school art contests when he was a student. However, he chose to study business to meet his parents' expectations. After finishing school, he worked as a sales representative for different industries. Despite being busy with his day job, Chen never gave up on paper art and has been pursuing his creative calling outside of work hours for years.

Chen was spurred to make paper-sculpting as his side job after winning a cash prize at an art contest in 1994. Having gained confidence through the first contest where he won the prize, Chen started participating in paper-cutting competitions hosted by Taiwan and other countries in 2000 and earned several awards. In 2003, his artworks were featured by the New Jersey State Museum.

Over the years Chen has accumulated number of paper creations, and given the positive feedback of paper art books, Chen established a publishing company in 1998. So far, he has published eleven tomes that feature his artistic collections and personal guides to paper-crafting techniques.  In addition, he opened classes to teach paper sculpting. In 2005, he established the Taiwan Paper Art Association (中華民國紙雕協會) to cultivate seed teachers for this field.

As sculpting paper requires lots of techniques and is extremely time-consuming, there are more amateur artists than professional ones in this field of art. Chen demonstrates his stellar professional competence through his artworks, which reflect the efforts that he has invested in as well as breakthroughs that he has made throughout the years.