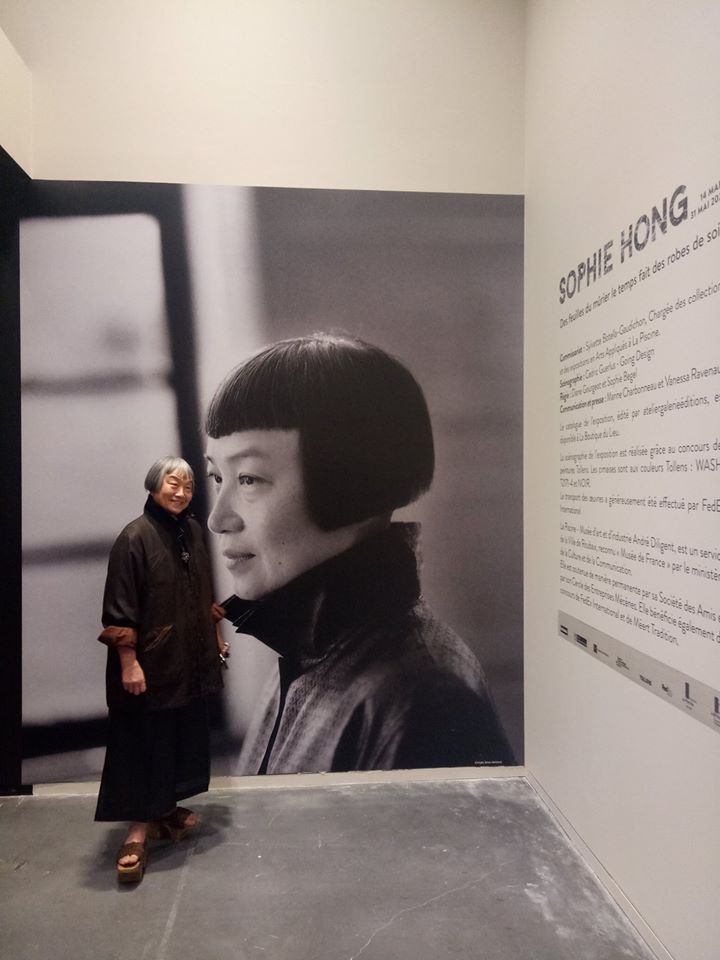 Sophie Hong is a well-esteemed textile artist and fashion designer who brought Taiwanese designs to the international stage. She is also a painter, sculptress, jewelry maker, and shoemaker. Her own paintings and art pieces, as well as artworks created by her friends, now decorate her clothing shop in Taipei.

After graduating in 1977 from Shih Chien University's Department of Fashion Design, Hong started her own fashion company and then in 1982 opened her first shop in Taipei. In 1988, while traveling in Hong Kong, a bundle of black fabric in the dark corner of a small gift shop caught Hong's eye. The fabric was almost like lacquerware — shiny, stiff, and stunning, and she fell in love with it at first sight.

This fabric was "lacquered silk (湘雲紗)," also known as gambiered silk or mud silk, which has a leather-like durability with feathery softness. Hong then worked out a method to further revitalize and soften this traditionally-made fabric and created a greater variety of colors, which became known as "Sophie's Silk" or "Hong Silk" — her signature fabric today.

1990 was a turning point for Hong, for that was the year when she met National Taiwan University professor Francoise Zylberberg, her first "French connection," and many other French scholars through Taiwan writer Jade Y. Chen (陳玉慧). Zylberberg was also the founder of Taiwan's first French-language bookstore Librairie Le Pigeonnier, which was eventually inherited by Hong after Zylberberg passed away.

In 1994, Hong received a scholarship jointly awarded by Taiwan's Ministry of Economic Affairs and the Ministry of Europe and Foreign Affairs of the French Republic for studying in France. At the time, she had already made a name for herself and was considered a successful fashion designer in Taiwan; however, she decided it would be worth the risk.

She first studied at Institut Francais de la Mode, while learning French at Centre de Linguistique Appliquée (CLA). Then she went on to work at prestigious fashion houses such as Christian Dior and Chanel. This experience broadened her horizons, opened her mind, and liberated her creativity, leading her to cross over into the realm of couture fashion.

Hong never had the desire to mass-produce her designs; instead, she has always treated her clothes as "works of art." Her work is a fusion of East and West, combining Eastern colors and fabrics with Western sculptural practices. Her motto has been "the best designs are made for the right person on the right occasion." For Hong, fashion is about being practical, comfortable, and elegant. Clothes that would look good on everyone, regardless of nationality.

When it comes to fashion, Hong believes it is not about chasing the latest style, but rather the selection of what is most suitable for each individual. Using natural fabrics and dyes, Hong's high-end couture is known for its handmade-in-Taiwan quality. Her brand seeks to preserve and promote the craft of natural dyeing, the universal values of culture and education, and the aesthetics of everyday life.

In 1996, she debuted her first fashion show in Paris. By 1997, Hong's work was included in the permanent collection of the Palais Galliera (also known as Musee Galliera - Musee de la Mode et du Costume) in Paris.

Since 1999, Hong has participated in the New York Spring and Summer Fashion shows and gradually gained popularity in the United States. Then in 2000, she made her debut at Tokyo International Fashion Fair, where her clothing line was well-received and gained many new fans. 2010 was another milestone for Hong as she opened her flagship Paris boutique "Sophie HONG Paris," which is located at the Palais Royal Gardens and close to the Louvre.

In 2012, she was honored by the French government with the title "Chevalier de l'Ordre national du Mérite" in recognition of her years of dedicated effort in textile innovations and cultural exchanges. In 2014, Hong was awarded the Golden Pin Design Award (金點設計獎) for best Asian design for her "Hong Silk" creations.

She has since designed for performance groups, plays, and even puppet theater shows. In 2015, she opened her second shop in Taiwan by sourcing a venue in Taichung. Her success in the world of haute couture is a source of pride and inspiration to all.