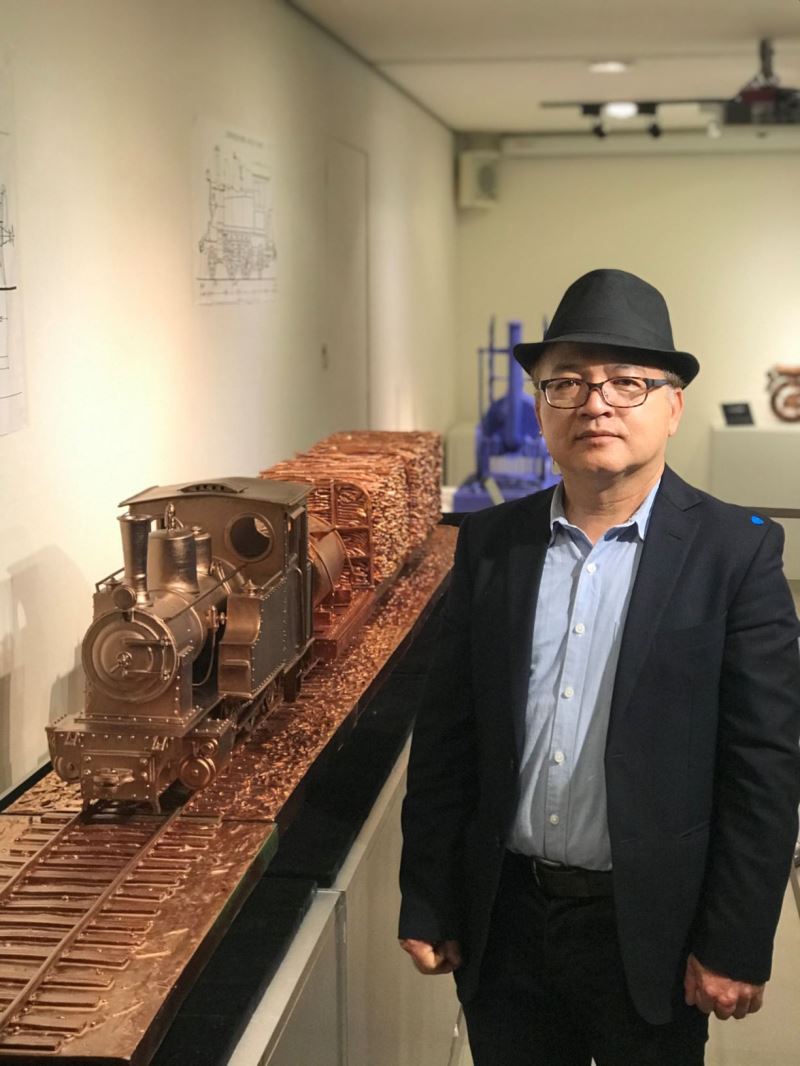 Known as "the glaze magician," Hsieh Chia-heng is Taiwan's first ceramic artist to mold steam locomotives and trains from clay. His works are a hybrid fusion of influences from Spanish luster-glazing techniques and Taiwanese transportation culture, resulting in ceramic sculptures that appear to be made of metal, stone, or even marble.

Born into a well-to-do family, Hsieh showed much artistic talent even as a kid. He was the winner of many art competitions in elementary school and continued to win a few more while he was studying product design at Fu-hsin Trade and Arts School (復興商工). As an only child, Hsieh's parents expected him to take over the family's lumber business, and after he failed his university entrance exam, his father arranged a position at the family company while he attended evening business classes at a local community college.

After completing his mandatory military service, Hsieh was resigned to his fate and continued to work at the family company. Their lumber yard was located close to Taipei National University of the Arts' sub-campus and many art students would visit to buy materials, rekindling Hsieh's yearning for the arts. However, his parents refused to support him, believing that it was another short-lived phase. So, at the age of 27, Hsieh decisively sold his car and bought a plane ticket to Spain.

In Madrid, Hsieh initially planned to study furniture design, but had to drop the idea when he realized his Spanish-language abilities were not sufficient. Although he had not touched pottery for years, Hsieh entered a five-year ceramic art program at Escuela Madrileña de Cerámica de la Moncloa, which had less language restrictions.

During his fourth year in the program, Hsieh became particularly amazed by the lustrous, rich, and colorful works by renowned Spanish ceramic artist Joan Carrillo. The luster-glazing technique was developed by 13th-century Islamic artisans for religious and royal pieces. The technique was passed down in parts of Spain, but is a complex and difficult one requiring extensive knowledge of glaze chemistry makeup and abundant experience in controlling the kiln temperatures appropriately.

One of the hallmarks that distinguishes ceramic artists is their glazing technique and Hsieh was especially interested in glazing techniques. In order to study glazing more in depth, Hsieh continued to graduate school at Universidad Complutense Madrid.

In 1996, Hsieh's luster glaze piece won second prize in the 21st Certamen Nacional de Cerámica in Spain, which was the highest award ever won by an Escuela Madrileña student. After obtaining his master's degree, Hsieh wanted to stay and continue his career in Madrid, but as a dutiful son, he returned to Taiwan in 1997.

After returning to Taiwan, he started creating teapots with natural glazing techniques. In natural or ash glazing, natural plant materials like longan shells or mung beans are burnt to ashes, which are then sprinkled onto the glaze before firing. The teapots, which require more precision than most ceramic products, were very well-received and he began to establish a reputation.

Growing up with a fondness for trains, Hsieh was challenged by his wife to create miniature trains from ceramics after seeing a Taiwan Railroad Administration (TRA) recruitment ad. He succeeded by using copper oxide to produce copper-red tones that can genuinely portray the train's metallic texture, and it became a chance to showcase luster glazing to the Taiwanese public.

There are more than 200 individual parts on a train, and each was made separately before being placed together to be fired. All in all, there are usually four to five firings; sometimes up to eight may be necessary to achieve the proper glazing effects. In 2001, Hsieh's "Steam Locomotive No. 9 (9號火車)" won the first prize at the 9th Competition of Taiwan Crafts and Design. Not only were the metallic colors and textures of the miniaturized train amazing, it emitted metallic sounds because it was fully vitrified by the high temperatures of the kiln.

Hsieh has continued creating ceramic trains, completing 50 such models of locomotives that once circulated in Taiwan. The accurate proportions, steely hues, and realistic textures of his works have won him much praise, but even more valuable is how his artworks provoke reminiscence, recapturing childhood memories of steam whistles and family life. He explores the maximum possibilities of creation across ceramics and metal to tell stories with pottery.