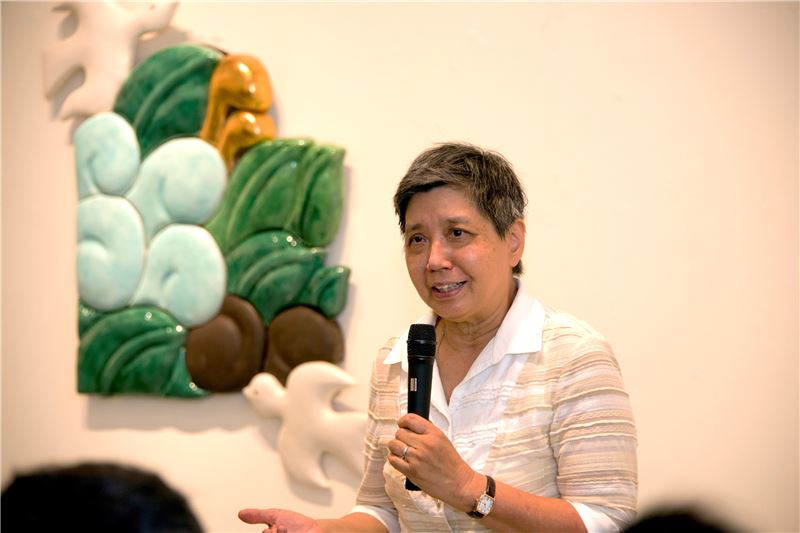 For over forty years, Winnie Yang has devoted her life to ceramics, firing clay glaze, and nature's beauty into symbols of her life. She focuses on figurative and realist themes, while also experimenting with abstract expressions, attempting to find within Eastern and Western cultures a taste for ceramics that matches her own spirit.

Yang was born in Maryland in 1946. Her family moved to Shanghai in 1947, and she came to Taiwan via Hong Kong to study in Taipei First Girls High School in 1961. In 1967, she was admitted to William Woods University in Missouri, where she majored in mathematics. In 1970, she attended a ceramics class, which triggered her creative genes; in 1972, she applied to study in a graduate program in art at Missouri University, where she majored in ceramics and minored in design.

She graduated in 1974, becoming the first overseas Taiwanese student to receive a master's degree in ceramic art. In 1975, Yang returned to Taiwan and worked at the National Palace Museum, engaging in experiments and research on ancient and imperial kiln techniques. With an in-depth understanding of traditional ceramics, she further enriched her creative horizons.

With both academic and cross-cultural prowess, she is able to fuse Eastern aesthetics with Western art trends and techniques, freely showcasing her creativity. In addition to inheriting the classical elegance of traditional ceramics, her works also manifest sincere sentiments towards nature.

Yang moved to live by Chengcing Lake in Kaohsiung in 1979, where she established a personal studio and dedicated her effort and time to modern ceramic experiments and creations. Bolstered by rigorous ambition and passion, she also strived for ceramic education and promotion of the art form. Her works from the 1980s mainly feature everyday containers and ceramic murals, where delicate traditional Chinese techniques are fused with Western design, expressing reserved, tranquil, and elegant aesthetics.

She not only focuses on capturing the form of object, but also emphasizes more on expressing the unique appearance of pottery. Her main creative works from the 1990s are carved-pattern ceramics. Natural elements such as flowers, leaves, flying birds, floating clouds, and water ripples are all her creative inspirations. Through continued experimental attempts, she has been able to rediscover almost-forgotten techniques of decorating pottery.

Through bright and diverse colors, she expresses the vibrancy of subtropical plants, flowers, and birds, which embody her passionate concerns for nature and represent her love for life and the environment, triggering people's interest and passion to get closer to natural environment through works of ceramic art.

"The themes I express are mostly derived from nature, extending the vitality and energy of green plants. I hope to create the lively atmosphere of sunshine and rain showers by depicting rocks, waves, stamens and pistils, leaves, floating clouds in the sky…, and deepen the dynamic sense of space through the special effects of ceramics."