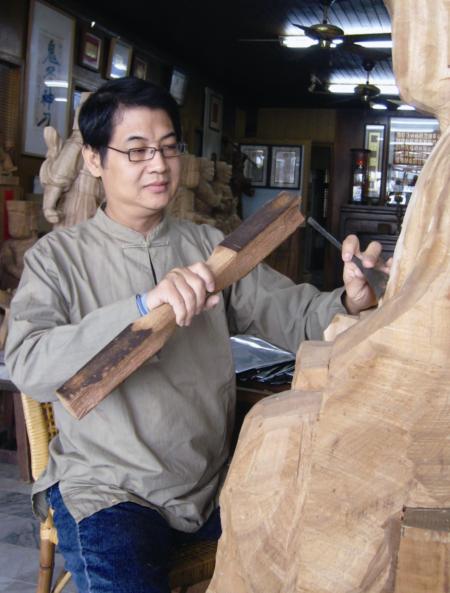 "Chen Chi-tsun! Why didn't you do your homework? Were you dozing off while the teacher was giving a lesson?" the teacher said in Mandarin — a language that was not at all familiar to the young Chen, who was in second grade of elementary school and had no knowledge of Mandarin's basic phonetic symbols. Overwhelmed and frustrated, the native Taiwanese speaker kept his head down and sought shelter in the art world where he could find comfort and inspiration.

Chen's carving journey began when his father, who was seriously ill when he was in the fifth grade, took him to downtown Tainan to watch how people make sculptures. Amazed by how the craftspeople mastered the skills underpinning traditional carving, the artist decided to take up the fine craftsmanship.

"Chi-tsun, I gather you have no interest in school, you love drawing, why not learn some crafts, at least you'll get by without worrying where your next meal is coming from," Chen's father told the artist before passing away. Decades later, the child who fell behind the rest of his class, was bestowed the title of "National Living Treasure" for his efforts in exquisite wooden craftsmanship preservation in 2020.

At the age of 14, the Tainan-born artist took up an apprenticeship under a master of Fuzhou School to learn how to make Buddhist wooden sculptures. At that time, Chen came across exhibitions of works by renowned artists, which made Chen yearn for a display of his own creations.

To this end, Chen read up on Western philosophical thoughts that define beauty and explored the differences between traditional Chinese arts and Western aesthetics. The artist later signed up for sketching lessons to develop a mastery of depicting accurate proportions of the human body, recreating the hallmarks of the Fuzhou School while staying true to its rich ethos.

Chen was thrust into the spotlight at the age of 25 when one of his works topped his competitors' at the 36th Tainan Art City Research Society Exhibition. In the following year, he was named winner of the first edition of the ChiMei Arts Award with his work "Window," a wooden sculpture that combined realistic body proportions with traditional art forms.

He has studied Western oil painting and sketching and has applied what he has learned to his carvings. His forte is Buddhist statues and human likenesses. Not wanting to be limited by tradition, Chen constantly looks for ways to change his pieces and make them relevant for the modern era. He believes that both the traditional and the modern are necessary elements for any piece, because the traditional helps the artist to grow while the modern provides the wherewithal to present the traditional.

The artisan was not estranged by his early achievements. In an effort to further break free from the limitations of traditional crafts, Chen never ceases to incorporate modern elements, western oil painting techniques, and sketching methods with the tradition art forms, bringing woodcarving to new heights. In 2014, Tainan City designated the artisan as a Preserver of Intangible Cultural Heritage in Traditional Art.

Drawing from life experiences and folk customs, Chen has amassed a collection of sculptures of novel characters and deities, and "Marshal Canopy (天篷大元帥)" is one stellar example of the former. Unlike how the character is widely perceived as a lecherous figure, Chen's interpretation of Marshal Canopy, a character from 16th-century novel "Journey to the West (西遊記)," is a lordly commander with three heads and six arms as described in Taoist archives.

Some of Chen's works reflect bits and pieces of personal life; among them is the sculpture "New Clothes," which delicately portrays his daughter's facial expression when she puts on a brand-new outfit. Guided by the photo that captured the memorable moment, the artist meticulously recreated the moment his bashfully shy child embraced her layered dress.

To breathe new life into traditional woodcarving, Chen founded Chi-Tsun Sculpture Studio (啟村雕塑工作室) in his hometown Tainan in 1986, and he did not just stop there. In a career spanning more than 40 years, the master wood-carver has cultivated generations of new wood-carving artists.

Chen teamed up with universities and vocational schools to facilitate the integration of education and woodcarving skills. The keen artist went the extra mile to promote the art form through lectures and seminars. In 2019, Chen donated his prize money from winning the prestigious Taiwan Woodcarving Heritage Achievement Award (台灣木雕薪傳成就獎) to a wooden sculpture camp and vulnerable communities.