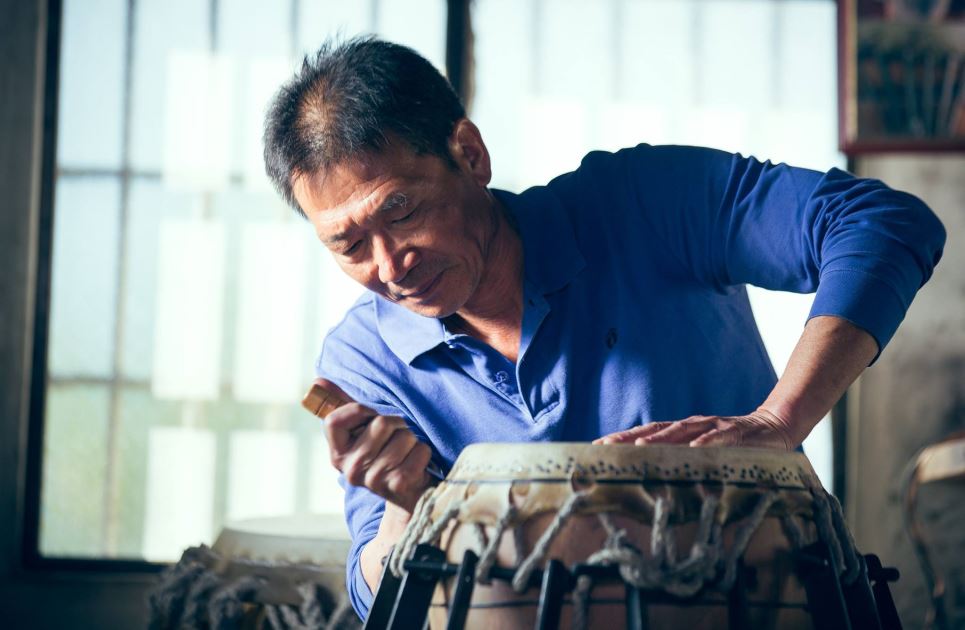 Name: 黃呈豐
Born: 1960
Place of Birth: Changhua
Did You Know...?
On a small island like Taiwan, local customs from the northern, central, and southern regions differ. While the majority of ethnic groups on the island use drums to mark their own religious rituals and celebrations, the drum pitches and drumming rhythm vary from one community to another.

Huang Cheng-feng (黃呈豐), second-generation drum maker who is the owner of the renowned Yongan Drum-Making Workshop, was once a rebel of the family who resisted the idea of taking over the decades-old family business from his father Huang Hsiu-an (黃秀安).

The production of hand-made drums begins with the cutting of raw leather, and subsequently the leather tanning. The traditional drum maker goes on to iron the leather with heat and pressure to create a clear surface for the instrument. When the weather turned sultry in summer, the household Huang grew up in was always full of the unbearable smell of ox or water buffalo hides.

The stench led to Huang's unwillingness to follow his father’s footstep. At that time, Huang would rather be a factory worker with regular working hours than to take over the smelly and labor-intensive job of making drums, causing seemingly endless disputes between Huang and his family members.

It was not until 1983 when Huang’s father suffered from a stroke, elder brother passed away, and family members and friends left the business that the Changhua-born artisan decided to return home, pick up the craft, and keep Yongan Drum-Making Workshop up and running.

Living in Xianxi township of Changhua County, Huang family had been struggling to make ends meet as the area around the agricultural household was deemed unfit for growing crops.

As households holding shrines for deities had been a common practice at that time, a family member who ran a store for Taoist supplies began to try her hand at making musical instruments related to all the performance art of folk beliefs in Taiwan.

Encouraged to follow suit, Huang's father and uncle began their career path of traditional drum makers after picking up the time-honored techniques from an artisan from Lukang, the cradle of Taiwan's traditional artisan crafts. Wishing his family safe by heart, Huang Hsiu-an established an drum making workshop and named it "Yongan" – "Yong" is the Mandarin expression for "forever," and "An" stands for "safety" or "free from harm."

Year after year, from peeling off skin of ox or water buffalos, pulling the canvas tight, to the process of everything involved in making a drum cover, handmade drums from the workshop display a strong adherence to traditional techniques.

In 1991, in addition to overseas orders from groups for taiko performance in Japan, the demand for Huang's handmade drums for religious ceremonies in Taiwan rocketed sky-high. During the heyday, customers of Yongan Drum-Making Workshop often rushed to the Changhua-based studio to pick up the drums that were not yet finished.

By the end of the 1990s, the workshop was struggling to keep it above water as it could no longer compete against Chinese drum manufacturers' cost advantages. It was after the year of 2000 that customers gradually discovered that imported low-priced drums were mostly of poor quality. The hand-made percussion instruments from Taiwanese manufacturers won back customers for their durability and hence experienced a resurgence in popularity.

The biggest challenge facing the drum-making industry now is the shortage of raw materials. Back in the days there was an abundant supply of farm cattle and woods, which are no longer easy to acquire, leading to the inevitably decline of the industry.

However, Yongan Drum-Making Workshop has managed to garner more appreciation than before for its insistence on producing the drums with fine quality. For Huang, making drums is a lot more than a life-time calling, it represents a sense of accomplishment and family pride.

In 2018, a series of documentaries featuring traditional drum-making techniques performed by Huang was released by Taipei-based General Association of Chinese Culture. With the aim of preserving time-honored traditional skills through films, the non-profit organization has produced short film series since 2017 highlighting Taiwanese craftsmen who take great pride in striving for excellence in quality and service.