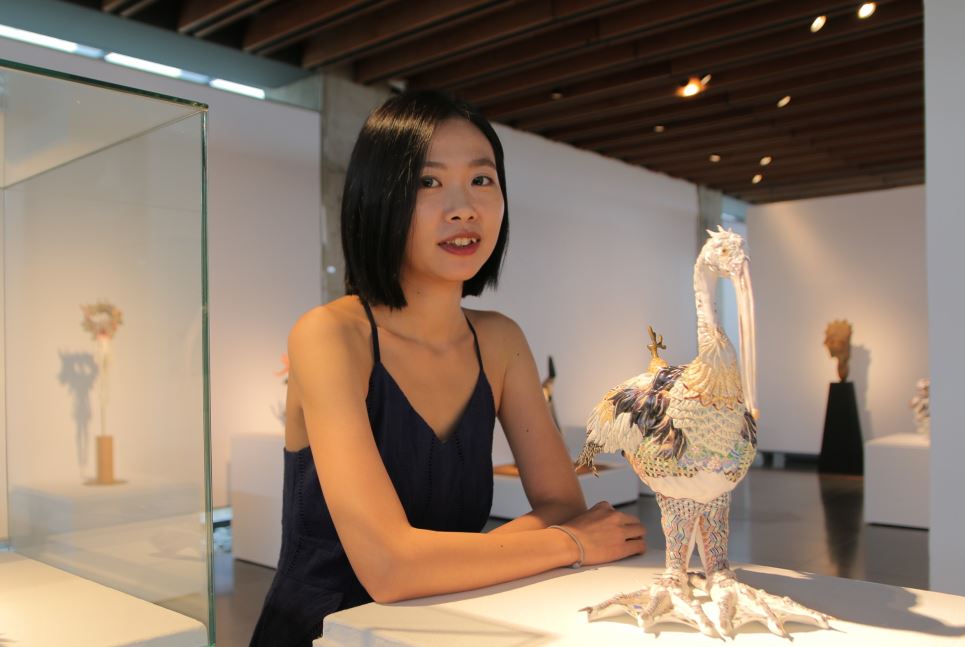 Name: 李思樺
Year of Birth: 1987
Place of Birth: Malaysia
Did You Know That...?
As a child, Lee Shih-hwa (李思樺) was shy and frail. Often hanging around quietly at the restaurant run by her family, she developed a habit of observing people. The observation capability has guided her works in later days. Lee' works are impressive, not only for her inheritance of traditional concepts and styles in both arts and crafts, but also for how it has incorporated the concept of life and rhythm of the times.

Lee Shih-hwa (李思樺) was born in 1987 and grew up in Malaysia, where her family ran a restaurant. Throughout the years from elementary school to high school, Lee's happiest times were all spent in art studio. She most enjoyed working with pastels and watercolors, with a particular talent for bright, colorful, vibrant, and elegant works. After graduating from senior high school, she followed her elder brother and sister to Taiwan for college education, aiming to continue her pursuit of becoming a painter.

At the age of 19, Lee Shih-hwa got accepted into the Crafts Section of National Taipei University of Education's Department of Arts and Design. She happened to enroll in a course on ceramics, and it turned out that this would be the start of an interest in pottery for her. Studying under ceramic artists Lo Sen-hao (羅森豪) and Huang Keng-mao (黃耿茂), Lee enjoyed the creative process of molding clay at a liberal learning campus environment. Using her delicate painting skill, Lee injected new fun and attractive elements into her ceramic art.

With encouragement from her teachers, in 2010, Lee enrolled in the Graduate Institute of Applied Arts at Tainan National University of the Arts, specializing in ceramics. There, she studied under ceramic artist Chang Ching-yuan (張清淵), embarking on a new journey into the world of ceramic creation. It was while studying for her graduate degree that Lee met her Taiwanese husband, Chang Yao-chang. At that same time, she was invited to take up an artist's residency at the University of Arkansas.

Lee's works created during her college years were primarily realistic portrait sculptures. In graduate school, she began adding animal figurines into the mix, and her style took a turn for the fantastical, exploring themes around desire, suffering, and death. During this time, she was invited to take part in a 2012 exhibition curated by the New Taipei City Yingge Ceramics Museum entitled "New Site—East Asian Contemporary Ceramics Exhibition (新域─東亞當代陶藝交流展)."

Two years later, in 2014, Lee graduated. She turned from her portraiture works to the focus on figures of mythological beasts. She has sought out the meaning and value of the animal figurines in traditional architecture and totems, and created a style characterized by complex, exaggerated shapes and diverse decorative patterns. The works were tremendously eye-catching, and in 2015, she won a Bronze Award in the Community Section of the 7th Taiwan Golden Ceramics Awards (台灣金陶獎). Two years later, at the 3rd Taiwan Young Pottery Artist Award & Biennale (台灣青年陶藝雙年展), her works again attracted substantial praise.

Lee has said that the culture and art scene in Taiwan is more flourishing in comparison with that in Malaysia. There are many museums and galleries, and foreign artists would come to Taiwan to exhibit their works frequently. Living in Taiwan, one has the opportunity to see many different forms of artistic expression. On top of this, she has also observed that the acceptance of art in Taiwan is considerably high.

"Art is like the pursuit of spiritual fulfillment. It is a yearning for beauty, a process of seeking self-recognition and self-identification," she says.

Since 2015, Lee Shih-hwa's creative output has been marked by two main characteristics: focus on animals as the theme and intricate, ornate shapes and decorations. With respect to the latter, Lee has worked hard to express a sense of dynamic tension and a strikingly rich and gorgeous style. She doesn't hold herself to any particular style, often sketching and etching flowers and plants or geometric patterns however she feels like. Sometimes she would paint stories about the sun, the moon, and stars, and sometimes she would create collages combining popular patterns from all over the world and from across eras to present new visual sensations.

Each of Lee's works took over a month from start to finish, and along the way, she would constantly challenge herself with new and complex shaping and firing methods, as well as complex molding, delicate carving, and detailed painting work. The end results, though, are gorgeous and elegant, rich with a sense of joy and full of spirit and energy.

For example, her 2015 "Hexagonal Salamander (六角螈)" boasts a well-formed, but funny appearance. It seems to have two large pairs of eyes and a lifelike sense of energy and spirit. It exudes a wild beauty and is brimming with an impressive vitality.

Her "Brilliant Jade Collection (琗璱集錦)" won the top creative award at the 2019 Taiwan Ceramics Awards (臺灣陶藝獎). The work won unanimous recognition and favor from the judges for its meticulous and complex colors and the superb sculptural skills on show. Inspired by scenes of people seeking help from gods when faced with dark times, it incorporates religious iconography and a variety of animal figurines to create an "auspicious beast." The work is visually magnificent, signifying the aspiration to bring positive energies and blessings.