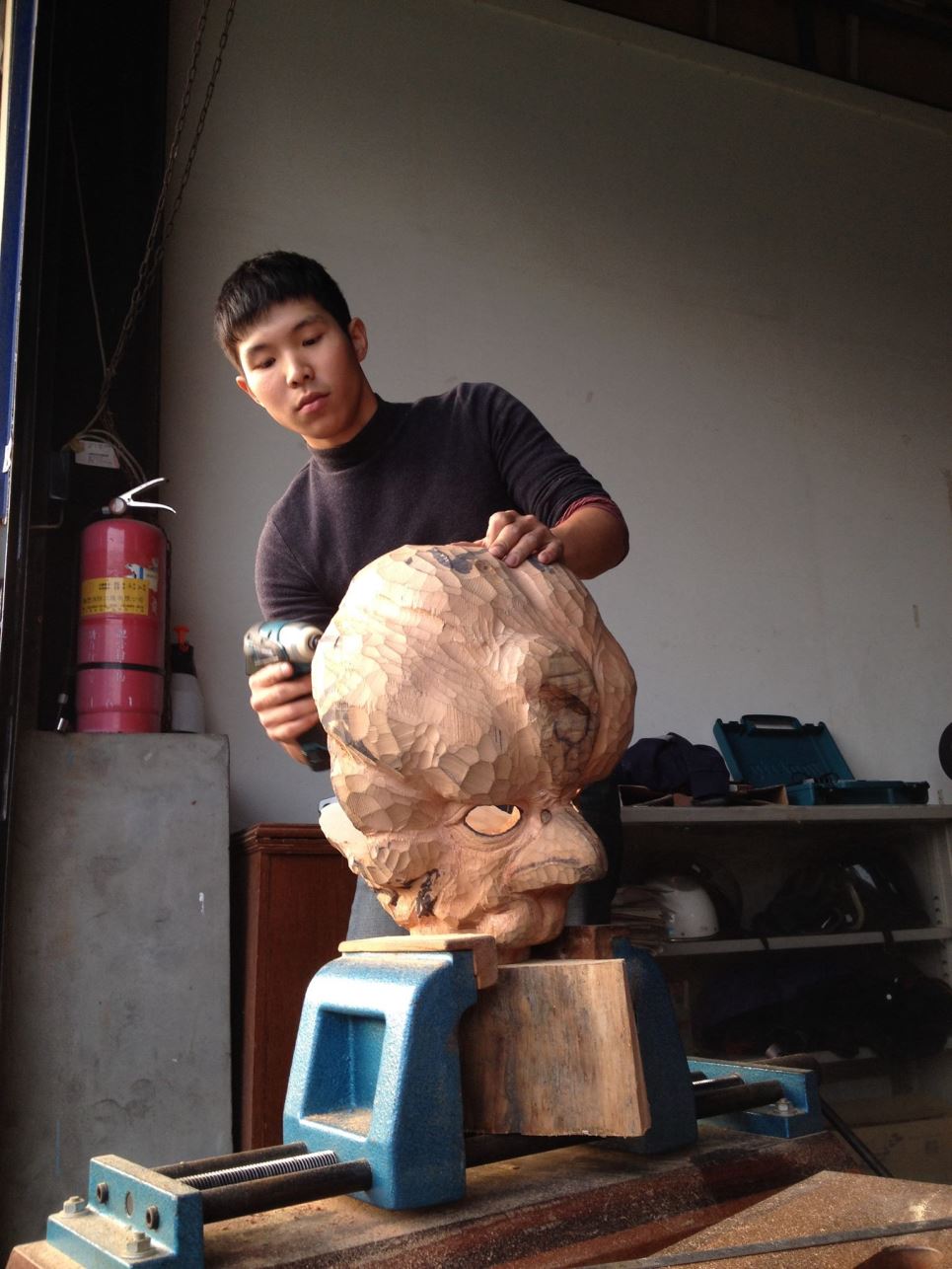 Name: 江孟禧
Date of Birth: 1987
Birthplace: New Taipei City
Did You Know That...?
Jiang Meng-si (江孟禧) loves painting ever since he was a child, and he cherishes his childhood memories painting at home. Although he was never exposed to sculpture during his teen years, while applying for university, he got a sudden burst of motivation to study sculpture, out of curiosity, thus embarking his path towards the three-dimensional art.

Born in New Taipei City, Taiwan in 1987, Jiang Meng-si (江孟禧) specializes in stone carving, woodcarving and clay sculpture. During his childhood, he watched his father, a watercolor artist, painting animals or objects with such vividness as if bringing them to life through paint and brush. He enjoyed watching his father's works hung on the wall, and, under the influence of his father, Jiang developed interest in painting and would use paper and pen to scrawl and draw. Having great enthusiasm for fine arts, Jiang attended the fine arts classes in junior and senior high school. He later applied to study sculpture at the National Taiwan University of Arts (國立台灣藝術大學).

Prior to entering university, Jiang was never exposed to three-dimensional art and sculpture. He applied to study sculpture out of curiosity, and in the process of learning, he developed great interest and his dedication to the study of this art form changed the course of his life ever since.

The Department of Sculpture has courses specializing in different types of materials, such as clay, metal and wood. At first, he decided to specialize in stone carving due to his love for landscape and nature. Later he turned to creating more with wood. Jiang noted that wood has amazed him when he used it to create, as each piece of wood has a different type of grain pattern on its surface.

He said that he began to entertain the idea of becoming a professional artist during the years in university, and in his sophomore year, he made his mind to continue with a Master’s degree in art after graduation, feeling inadequacy to pursue an artistic career. It was under his mentor's supervision in graduate school that he gradually switched over to woodcarving, and his creative path has truly begun.

Over the years, he has expressed his creativity mainly through woodcarving. Many elements of nature can be found in his works, from his early series on landscape, to his later depictions of birds and people. Jiang enjoys accentuating the spatial and existential elements in his works, which often revolve around images and symbols of people, wildlife and nature.

Speaking about inspiration, Jiang said that he often jotted down through drawings the creative ideas that flashed in his mind when he was out in nature.

Before creating an artwork, Jiang would spend some time to get used to the wood, feeling their textures, and then determining their best uses. During the woodcarving process, he would sense the interplay between nature and himself through his interaction with natural materials. Jiang believes that there must be a kind of connection between man and nature that cannot be severed, which might be derived from the life source.

In order to ensure the feasibility of each piece of wood for sculpture, Jiang would first produce a miniature model to determine how to overcome the issues that would arise concerning the direction of the wood grains as well as the materials’ resilience.

Subsequently, with carving tools, he would gradually carve out the details, leaving a deep imprint in the wood, and finally, bringing the long-held concepts into reality.

When Jiang used oil paint to color his works, he would retain the original color of the wood to an extent so as to not conceal the intricate details of the wood’s patterns.

The representative works produced by Jiang over the years include "Practicing (練習)," "Aviator (飛行員)," "If I were a mountain (如果我是山)," and each of his works contains a specific story. Among them, "Foraging Mother (覓食的母鵲)" and "Grandmother(祖母)" narrate the life of Jiang and the prominent female figures who mentored him. Trivial things from his childhood in his memories have turned into motifs of his artistic creations.

Jiang Meng-si currently serves as a lecturer at the Department of Sculpture in National Taiwan University of Arts, and he has continuously created new artworks at the same time.

He once said that in his process of self-discovery, he hopes to convey his personal understanding of nature to others through his works. Jiang believes that he would have made a difference to the world so long as there is one person inspired by his works.