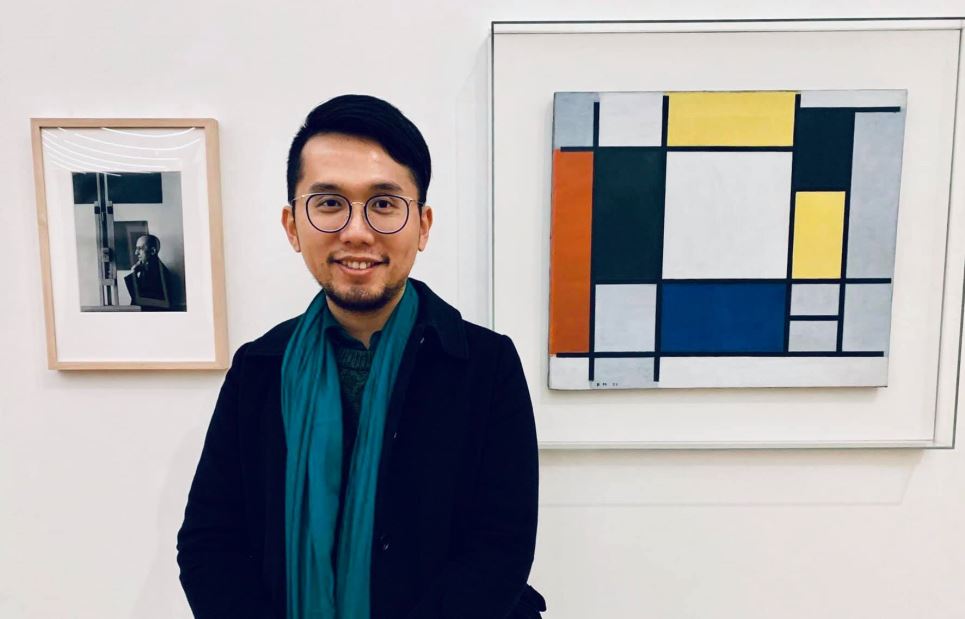 Name: 陳漢聲
Year of Birth: 1988
Place of Birth: Kaohsiung
Did You Know That...?
Walking Grass Agriculture (走路草農藝團) was founded by Chen Han-sheng (陳漢聲), and Liu Xing-you (劉星佑), all of whom hail from rural families and have a profound love for art. They have used their connection to the land as a jumping-off point for contemplating the relationship between art and agriculture and the possibilities for their joint development.


Chen Han-sheng (陳漢聲) was born in Kaohsiung in 1988. In high school, he studied advertising design, and in college, he majored in visual communication design. It was while studying in college that he had his first exposure to video production and animation, and for his graduate studies, he went on to Taipei National University of the Arts to concentrate on new media art.

In the process of his studies, Chen never settled for using a single medium for his pieces, instead, preferring to experiment with a variety of media in animated pieces and dynamic installations.

Growing up with a rural background has enabled Chen to incorporate traditional fiber arts in his creations and to reflect the relationship between people and the environment. The ambiguous relationship and dynamic flow between man and nature, industry and agriculture, is something constantly appearing in Chen’s works. He takes a craftsman’s approach to contemporary art and productive labor, using his creations to elaborate the relationship between himself and his hometown.

"Becoming an artist has given me the chance to live in the way I want to, outside of the standard paths to success that society lays out," Chen has said.

Driven by his concern for environmental issues, Chen's experimental animation "Restart (歸靈)" (2013) imparts a warning about environmental damage and also sports a little taste of ancient beliefs. The inspiration for this piece was a desire to talk about the environment, but with the general issue of environmental awareness well known, Chen set out a general, easily understandable, and non-specific narrative approach.

The "Made In Taiwan—Young Artist Themed Exhibition" at the Art Taipei expo is an effort by the Ministry of Culture to nurture young Taiwanese artists and help them step onto the global stage. In 2018, Chen Han-sheng was among the artists selected, and he put in an extremely eye-catching turn that year. The piece on show was his latest from that year, in which he attempted to combine traditional crafts, fiber arts, technology, sound, and installation art in search of a broader array of possibilities for new media creation. He hoped to give his audience a new sensory experience and subvert established imaginations about traditional media and technological creation. His work combined ceramics, glazing, silk-wrapped flowers, and dynamic installation art to communicate his remote thoughts about his hometown.

Chen Han-sheng's art is often inspired by observations of everyday life. For example, through small potted plants, he sees people’s desire to grow plants and have green spaces. Through different creative methods, he attempts to address these feelings and observations. Among these is his "Playful Objects (小清翫系列)" series, using ordinary crafts and a collection of everyday scenes as a means to tell stories of life. "Symbiotic Seedlings—The Earth and The Time (共生苗-土壤與時間)," meanwhile, builds on his past work "Symbiotic Seedlings (共生苗)" to portray the natural and industrial environments of his hometown and how the two exist side by side.

Chen's works have taken first prize in the 2015 Next Art Tainan Awards (Next Art Tainan Awards), silver in the Ministry of Education's Mata Awards in 2015, an award in the Photography and New Media Category (洄瀾獎) at the 2016 Hualien Art Exhibition, and an Excellence Award at the 2019 Art Olympia International Open Art Competition in Tokyo.

Chen began creating in 2013, and in the following years, he has taken up artist's residencies in a number of places, continuing to learn more through them. In 2016, he took up residencies at Treasure Hill International Art Village (寶藏巖國際藝術村) in Taipei City and Zhuwei Studio (竹圍工作室) in New Taipei City, and in 2017, at Cattle Depot Artist Village (香港牛棚藝術村) in Hong Kong and Ne’-Na Contemporary Art Space in Chiang Mai, Thailand. More recently, he has been an artist-in-residence at Pier 2 Art Center (高雄駁二藝術特區) in Kaohsiung and Art35 in China.

Chen has also been involved in exhibitions around the world, including the Biennale de Paris at France's Centre Pompidou, the Bangkok Art Biennale, the International Ceramic Biennale in Spain, Mimiartextile in Italy, and the Lishui Photography Festival in China.

In recent years, he has taken an increasing interest in gender issues, organizing the "Coexist Exhibition (多元成展)" focused on contemporary art of gender and LGBTQI issues, looking for ways to engage in an ongoing dialogue between creations, art, and exhibitions on these issues.

In 2019, he held a solo exhibition at the National Taiwan Museum of Fine Arts entitled "Once Lake, Field Now (湖底 尖山腳)," exhibiting video across eight channels. Through the interweaving of animation and real-time surveillance images, the work creates images in two times, and even if they both fit together, they can never be truly synchronized in time. In this way, Chen depicts an implicit exploration of historical landscapes and the reconciliation with the land of his hometown, Dashe (大社), Kaohsiung.

That same year, Chen also held an exhibition at Powen Gallery entitled "After the Explosion (牆隔神農)." The way from piece to piece was led by soundproof walls as visitors traveled between Renda Industrial Zone (Renwu and Dashe Industrial Zones, 仁武工業區與大社工業區) and Qingyun Temple (大社青雲宮) in Dashe. Through telling the tales of daily life and crises in the coexistence of agriculture and the petrochemical industry in Kaohsiung, Chen presented a microcosm of Taiwan's industrial transformation.

Chen Han-sheng continues to experiment with different approaches to incorporate technology in craft and to create works of extreme sensuous experience.