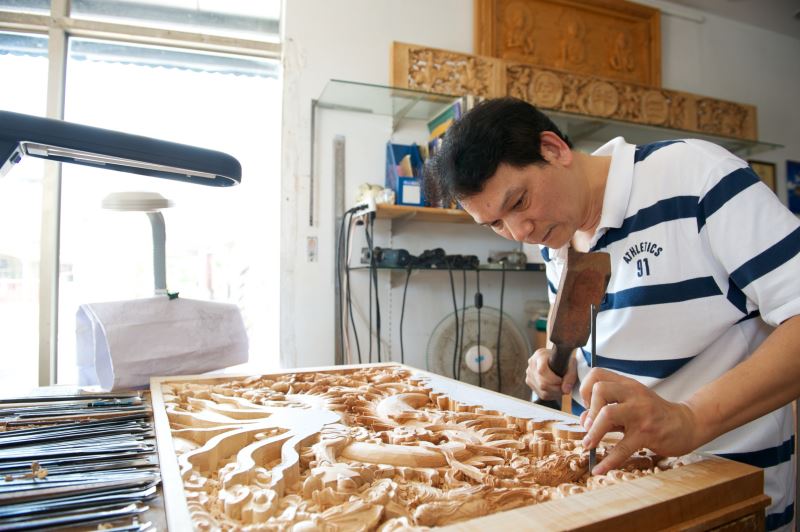 Name : 蔡德太
Born: 1963
Place of Birth: Taipei, Taiwan
Did You Know...?
Tsai De-tai not only previously headed up the restoration of the Dalongdong Bao’an Temple in Taipei, but also, in 2003, was invited to Singapore to coordinate the restoration of the Lian Shan Shuang Lin Monastery and to make an altar for the main hall of a temple in Malaysia. The quality of his finished works not only impressed these foreign temple authorities, but also gave Tsai himself a tremendous sense of accomplishment, as well as happiness at being able to help Taiwan’s traditional crafts shine on the international stage.

A master of the art of wood carving, Tsai De-tai was born in Lu’ermen, Tainan, in 1963. Growing up there, his family was so economically disadvantaged that they often had to rely on credit to buy staple provisions like rice and vegetables. This experience was what motivated Tsai to focus on learning a trade after finishing elementary school, heading to Wutiaogang to apprentice under Chang Yong-chuen. He worked from morning to night, and was even responsible for boiling hot water for the masters and senior apprentices to bathe after work, resulting in workdays of more than 10 hours in length, but he never once complained.

In the traditional apprenticeship system, one has to start by handling all the odd jobs and working their way up, surviving three years of training before they can be considered a master themselves. Tsai apprenticed under two masters, starting out considering woodworking little more than a trade to be learned and not investing any particular passion in it. However, when he was 16 years old, he was given the opportunity to work on some detailing work, having earned the trust of his master. That night there happened to be a power outage, and Tsai still remembers working away on the details of a statuary palanquin by candlelight. Although the 2-inch thickness of the wood and the difficulty of shaping the figures was a challenge for him as a young man, that night, Tsai discovered the joy and confidence that carving could engender in him, and from then on, carving became a lifelong commitment for him, one that he would never look back from.

In the 1980s, there was a boom in temple construction and renovation, and demand for artisans in arts like wood carving, stone carving, cut-and-paste ceramics, and painting grew tremendously. Having decided to dedicate himself to temple carving, Tsai was at that time still a novice and initially suffered from being overlooked as a result. However, once this wave of work hit, he was able to ride it to a stable line of work as case after case came in. Today, one can find his early works across the Tainan area, from the Nankunshen Daitian Temple in Nanmen District, and the Tianhou Temple in Lu’ermen, to the Orthodox Lu’ermen Matsu Temple in Tucheng.

When he first came to the Bao’an Temple, the chairman of the temple board was so impressed by the figures and flowers carved in the Sacrificial Hall that he promoted him to the position of master craftsman. From this experience, he was able to learn how to conceptualize a piece as a whole, slowly making the move from a simple technically skilled craftsman to a true artist capable of bigger-picture thinking.

As fewer new temples began to be built and competition from China drove prices down, temple carvers and artisans were hit hard, with many turning to smaller woodworking projects, carving other artistic pieces. Tsai, meanwhile, stuck to his guns, even though that meant toughing it out through a good half-year of unemployment. He has always held his work to a high standard, and believes that the real way to make your mark in the field is through putting quality over quantity. While he may only be contracted by a tenth of the number of employers as he once was, as long as they share his philosophy, he will be able to continue to differentiate himself, carving out a niche of his own and ensuring that the leadership of Tsai De-tai over a team of artisans remains a guarantee of quality.

Having lived through the rise and fall in demand for temple carvings, Tsai remains optimistic. He believes that there will always be a demand for culture-related industries, but approaches will change and “restoration” will become more of a science. While a variety of different views have emerged in recent years, restoration is still the mainstream, and regardless of the proportions, material, or style, he always aims to restore the work to its original state.

Tsai has also said that the starting point for religious craftsmanship should be honoring the deities, and as such, not only should one stay respectful of the process of creation, one must also try their best to bring out the power and beauty of their works in order to live up to that ideal. Not only that, he is currently dedicated to carving statues of the 36 Marshals as a demonstration of the characteristics of his carving skills. So far, he has completed nine statues, including one of Marshal Li, and he expects to have completed the entire project in the next two years. Tsai also looks forward to passing down his artisanal skills down to the next generation with his own two hands.