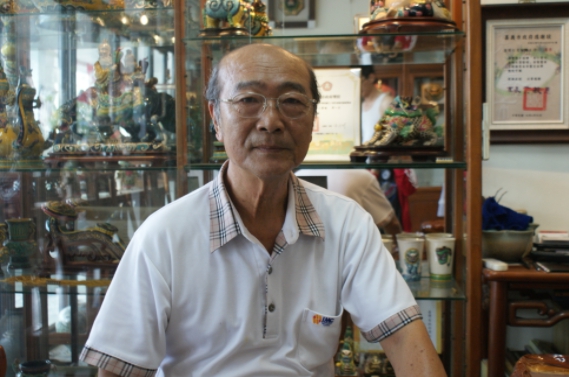 Name: 潘岳雄
Year of Birth: 1943
Place of Birth: Tainan, Taiwan
Did you know that? A registered traditional painter in Tainan City, Pan Yue-hsiung (潘岳雄) was born into a family of traditional painters, with his grandfather, Pan Chun-yuan, and his father, Pan Li-shui, both well-known in Taiwan for their contributions to traditional art. The youngest Pan, too, inherited the "artistic gene" of his family heritage, becoming a renowned artist in his own right who has been honored with the "Global Chinese Culture Award (全球中華文化藝術薪傳獎)." His works can be found in major temples along the length and breadth of Taiwan, where his delicate, refined style leaves a profound impression on all who view it. This three-generational lineage of master artists have become virtually legends, and Pan Yue-hsiung has also dedicated himself to the promotion of traditional arts and crafts for many years, holding classes to teach the public the art of painting in hopes that more people will come to fully understand the beauty of painting and pass on this beautiful old artform.

Born in Tainan in 1943, Pan Yue-hsiung watched his father and grandfather paint since he was a child, developing a natural interest in portraiture through his observations. During his junior and senior high school years, Pan accompanied his father to various temples to help with the temple paintings, his father drawing the artwork and faces, while he was responsible for coloring and installing gold leaf. Through this exposure, he developed a keen interest in the creation of portraits and danqing (traditional painting on silk or rice paper), learning a variety of painting techniques. While he did learn much through his own self-directed studies of portraits, landscapes, and "flower and bird" paintings, a great deal of his education was led by his father in the field.

In an interview, Pan said that his father and grandfather were the most "enlightening" teachers he could have had. Under his father’s guidance, Pan expanded his scope from landscapes and portraits to religious figures and deities. After graduating from high school, he worked for the US Thirteenth Air Force, which was stationed at Tainan Air Base at the time to do painting designs. After the American troops made their departure from Taiwan, Pan returned to his temple painting work, rekindling his passion and inspiration for working on temples.

The vast majority of the paintings of temple threshold guardians (menshen) painted between 1973 and 1975 were drafted by Pan Li-shui (潘麗水), colored by Pan Yue-hsiung (潘岳雄), and then finalized by Pan Li-shui, who added the finishing touches like the details of the face and beard. In 1976, Pan Yue-hsiung officially made his way out from under the wing of his teacher father and started his own business, although his father still provided guidance and helped out with some of the finishing touches. The threshold guardians of Tainan’s Fahua Temple (法華寺) were the first work the younger Pan completed for himself, albeit with some guidance from his father.

Pan inherited his father’s delicate, refined style of painting, but has also developed this into a style that all his own, showing mature technique, balanced and delicate color schemes, and vivid, lively overall compositions. The figures he paints radiate a kind of godly aura, with very expressive eyes and facial expressions. When creating his work, Pan first composes a picture in his mind, then draws a base with charcoal, and then uses a brush to outline the figures in ink. He emphasizes that the essence of creation is nothing more than dedication and perseverance. It is only through constant work day after day that he has been able to improve his painting skills and keep ascending to higher levels.

In 1995, Pan Yue-hsiung began to teach students of his own, hoping to help more people appreciate the art of temple painting. His works can be found all over Taiwan, from wall paintings and threshold guardians to Wangye boats. The majority of them are situated in the southern cities and counties, particularly Tainan, Kaohsiung, and Pingtung, along with other major temples like Taipei’s Dalongdong Bao’an Temple (大龍峒保安宮), Tainan’s Fahua Temple and Fengshen Temple (風神廟), and Pingtung’s Cifeng Temple (慈鳳宮). He has been honored with the Global Chinese Culture Award, as well as being named an Important Preserver of Traditional Craft (重要傳統工藝保存者) by the Ministry of Culture.

At 78 years old, Pan Yue-hsiung continues his creative work, dipping his brush in paint every day and even running classes teaching students who are aged anywhere from 60 to 16. Religious painting, says Pan, is a never-ending path of creation. He is determined to continue to paint as long as his hands can still hold a brush, and he hopes that his works will help more people understand the meaning of traditional arts and keep the long history of the painting techniques alive and vibrant.