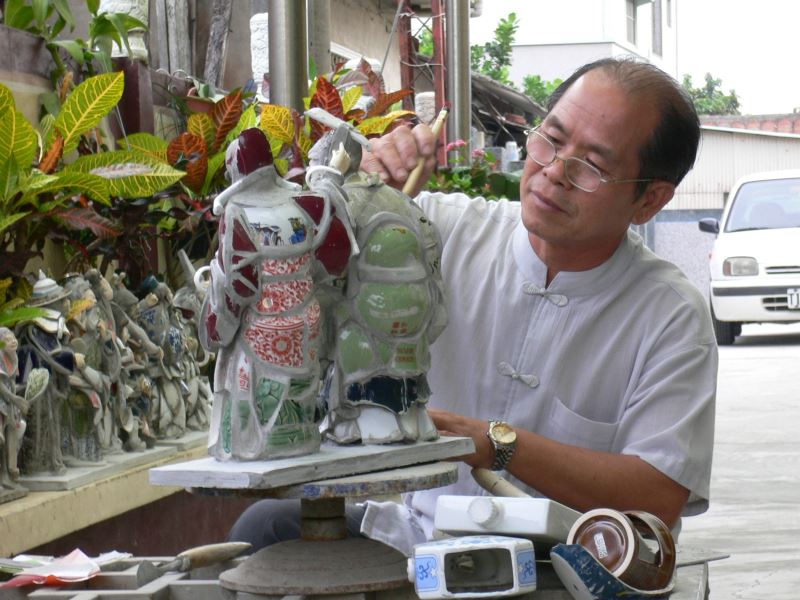 Name: 陳三火
Year of Birth: 1949
Place of Birth: Tainan
Did you know that? Chen San-huo (陳三火) is a fourth-generation master of the Taiwan Quan school of cut-and-paste ceramics. He has been recognized by the Ministry of Culture as a preserver of the piece of cultural heritage known as "clay-sculpting cut-and-paste ceramics (剪黏泥塑技術)" and is considered a national treasure as a craftsman. Chen began his studies of cut-and-paste ceramics at the age of 17, together with his elder brother, and has works posted in major temples throughout Taiwan. However, as times have changed and new technologies have risen, there has been a gradual decline in the call for the delicate techniques of cut-and-paste ceramics. Faced with a turning point in his career, he had a sudden revelation—rather than cutting, he would use chipping, making use of discarded ceramics and chipping at them along existing curves and texture to create vibrant collages of deities and other figures. Thus he developed his own unique variant on traditional cut-and-paste ceramic work.

Chen San-huo (陳三火) was born in 1949 in the Madou District of Tainan. His father was a temple painter and arranged for him and his brothers to learn different crafts from an early age, with his older brother, Li Shi-yi (who went by his mother’s maiden name), learning cut-and-paste ceramics, while he studied wood carving. However, when he was in ninth grade, Chen saw his brother’s masterful work and was so impressed that he decided to quit wood carving to take up that ceramic art.

After graduating, Chen followed his elder brother to learn the art of temple cut-and-paste ceramics. As an apprentice, he strove to complete every single task assigned to him. Working on temple projects saw them frequently traveling the length and breadth of Taiwan. Temples became like their home, as they would sleep on the floors and get up early to cook food. And so, under the tutelage of his elder brother, Chen San-huo began to set down a solid foundation in cut-and-paste ceramics.

In 1978, Chen left the safety of apprenticeship and set out on his own. With perseverance and a never-say-die spirit, he traveled the length of Taiwan, visiting temples all over, and even venturing as far as Japan and Hong Kong. Along the way, he worked on over a hundred temples, and his exquisite work can be seen all over. Particularly iconic are his work for the Ciji Temple in Fengyuan, Zhenlan Temple in Dajia, Chaotian Temple in Beigang, Fengtian Temple in Xingang, and Yuhuang Temple in Tainan. He was even hired by a major hotel in Japan to make cut-and-paste ceramic decorations for them, and his skills were also recognized by a Buddhist temple in Hong Kong’s New Territories, which invited him to participate in construction work.

In 2002, Chen San-huo set to work on restoring the Ciji Temple (慈濟宮) in Fengyuan, Taichung, which was damaged by the Jiji Earthquake. In the course of that work, he used a broken vase to collage together a Bodhidharma figure, marking the start of his reuse of shattered ceramics to create new, unique works. Where traditional cut-and-paste ceramics is self-guided, where one cuts out the shapes one wants, Chen says, his creations are more guided by the materials, looking at the shapes and colors of the pieces and creating freely from there, giving each piece a one-of-a-kind look.

In traditional cut-and-paste ceramics, the ceramics used are first broken down into general shapes and then trimmed down to the shape the artist wants. In Chen’s works, though, old vases, bottles, and pots are broken apart by hammer, using the resulting shapes to guide how they are pieced together without additional trimming.

In 2003, Chen San-huo’s elder brother passed suddenly from cancer, which was a tremendous emotional blow to Chen. He began to contemplate the impermanence of life and worry that the 400-year history of cut-and-paste ceramics may be in danger of disappearing. This was what inspired him to begin taking his craft into the art world.

Two years later, Chen San-huo’s first batch of innovative cut-and-paste ceramics were put on show at the Madou Cultural Center, where they immediately amazed the art world. He has transformed the traditional temple glass and bowl fragment into three-dimensional portraits, dynamic portraits, and ceramic tile collages of birds and animals, making a great breakthrough in the art of cut-and-paste ceramics and freeing it from the spatial constraints of the temple roof, making it an art form that can be placed on shelves and more clearly, strikingly viewed by audiences. That same year, he was invited to do the ridge decoration project at the Zheng Ziliao Fu’an Temple in the North District of Tainan. He was asked specifically to use his innovative collage process, marking the start of his efforts to raise the profile of his chip-and-paste ceramic craft.

In 2006, Chen Sanhuo set up a cut-and-paste ceramics studio in Madou, Tainan, where he not only continues to create, but also devotes himself to passing the art on. He believes that legacy is his mission, innovation is his goal, and creation is his hobby. The craft of cut-and-paste ceramics is gradually falling into decline, Chen says, and so in addition to teaching students to appreciate its beauty and artistry, the most important thing is to create special pieces with the craft to help keep the tradition alive.

Over his half a century in the field, Chen San-huo has been honored with a wide array of awards and recognition, including the Taiwan Distinguished Master Award (台灣地區傑出達人獎) in 2013, a Lifetime Achievement Award (藝術貢獻終身成就獎) from Tainan City Government in 2015, the Global Chinese Culture Award in 2016, and being named a National Living Treasure in 2020.